Back in the BsAs

So it's been a while since my last post. The reason? I had to nip over to Buenos Aires to sign some papers. Of course, the paper signing was 10 minutes but we decided to stay for a few extra days so we could re-gain all the weight we'd lost from not eating steak twice a day like we did for over two years in Argentina. Mission complete, commander. We're now, officially, bloaters again. Yey.

Anyway, i thought i'd write a post about what we did and saw in the few days we were there. There's a whole load of political stuff and why Argentina is most probably heading for stormy waters (again) and why inflation is rampant and what could be done to change it that i could go into but i can't be bothered. So, with the exception of the inflation issue i'm going to talk about the good things and stuff we enjoyed in BA this time around.

Let's get inflation out of the way, then. It's a major problem. Official government stats put it at a little under 10% per year (a pretty high number in its own right). But no one believes the government figures as when the agency charged with measuring inflation started reporting double-digit figures Grand Master K sacked the lot and put a bunch of his own cronies in their place. There are a number of reasons why inflation is so high. Most of the reasons a 15 year old GCSE business studies student could understand. Argentina's economic idiot presidente Kirchner doesn't understand. He's an exceptionally talented politician (that's not really a possitive thing) but he has no idea how to run an economy. He doesn't appear to even understand the idea that by keeping the Peso articificially weak against the dollar (3-1 when it should be around 2.2-1) means that there are more pesos in circulation which in turn is a major cause of inflation (in order to keep the peso weak, the central bank buys millions of dollars a month-to do this they need more pesos, so they just put in a new order at the printing press. Clever, eh?).

On the ground, it's pretty easy to see the differences in prices. We left at the end of January and i'd put prices at least 8-10% higher and more for some goods and services. That's 10% in just 4 months. Buenos Aires is now only very slightly cheaper than Santiago and that's just not right. Why? Because a financial analyst with 3 years experience in Chile should earn us$2-2300 per month (6-7000 argentine pesos). The same person in Buenos Aires would be extremely lucky to break us$1000 or 3000 argentine pesos. A recently gradauted Business student would be very lucky to get more than 1500-1800 pesos a month in Argentina. In Chile the same person would be getting over 3000 pesos. Inflation is making life a struggle for what's left of the middle class over there so imagine being one of the 30-40% living below the official poverty line.

We went to a Brazlian bar/restaurant called Me Leva Brasil. We used to go quite a lot as it was pretty cheap for its location (corner Costa Rica and Malabia) but it's now really quite pricey. Actually, i'd go as far to say that its equivalent in notting hill or other 'cool' parts of london would be cheaper. And better quality. Drinks are reasonably good value but the food is no way near worth the price. Taxis have gone up twice since we left. The hotel we stayed in 3 years ago before buying our flat used to be 23 pesos for a double. It's now 100 pesos. A coffee in January used to set me back around 2.50-3 pesos. Now it's at least 3-4 pesos and sometimes more. 330ml soft drinks in bars and restaurants cost a whopping 4.50 pesos. A cheap set lunch used to be 6-8 pesos and 11-12 back in January. Now its 14-20 pesos.

Anyway, enough of the boring inflation stuff. Just what did we get up to? Well, time was short and the trip was very last minute-we didn't even have time to let some friends know we were going as we couldn't have fitted them in (despite my cyber-stalker's claims, we do have friends in BA -i know who you are 'micheal'/anonymous, your illiterate comments and failure to spell your own pseudonym correctly can only come from one balding total tosser. Your IP address rather gave you away as well, pal).

So we met up with just a few people we really wanted to see. We went to the aforementioned brazilian bar which, despite the price rises, was still a good laugh. We went out for lunch with another friend and we also went shopping.

Books are hideously expensive in Chile so we went to El Ateneo on Santa Fe and bought our Time Out New York (yey, we're going in September) and some other books. The girlf managed not to buy any boots, despite walking past numerous shooe-shops along Santa Fe, which was a shocking departure from the norm. 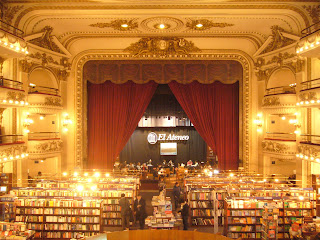 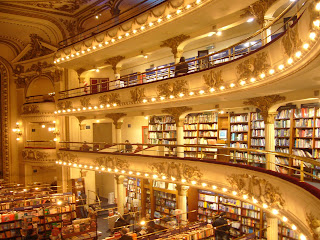 Other touristy stuff we did- We went to El Zanjon (Defensa and Indepdencia in San Telmo). I'd wanted to go for ages but never got round to it when i was living in BA. I would recommend the tour to everyone that heads to BA. The property was bought by a chemicals company over 20 years ago with the idea of opening a restaurant there (interesting business match...) but when they started to renovate and get rid of the rubbish that had built up over decades, they realised that the house was an archeological treasure trove. After years of painstaking work and at a cost of a few million dollars (at a guess) they found 3 or 4 different houses built on the same spot. Underneath are tunnels where the river used to flow. The original house dates from the city's founding and used to be right next the the Rio de la Plata before the city reclaimed a fair bit of land. The brick work is beautiful and very impressive and the tunnels underneath the property are really interesting. The project gained UNESCO recognition as a world class example of private cultural renovation. The tour in Spanish was excellent (no idea what the english version is like). I'm not really doing the place justice with this crap description so just look at the pretty pictures. 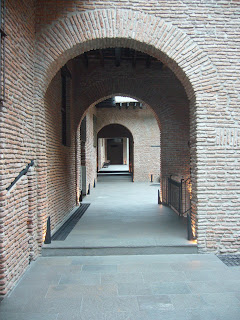 Water tank from the very first construction on the property 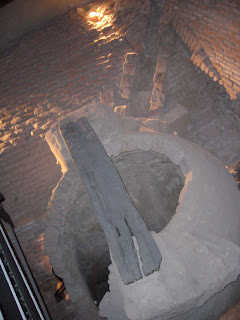 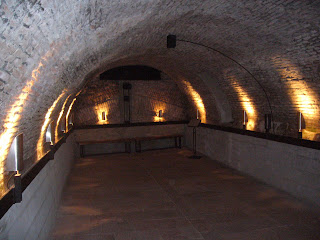 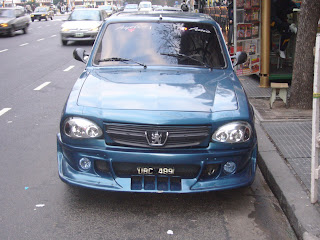 Finally, on Saturday we went to San Antonio de Areco with a friend and his visiting dad. San Antonio is Gauchoville. It was bigger and completely different than i expected. I think i expected a dusty wild-west town with a couple of un-paved roads. Instead, we were treated to a beautiful and incredibly peacefull country town. It looks like Palermo Viejo-all low rise 1900-1940s construction and because argriculture has always been a pretty lucrative business in Argentina, it's all pretty well-preserved. We saw a few proper Gauchos with their cool tapered trousers and sombreros. Here are some photos. Just check out the Art Nouveau door, stunning. 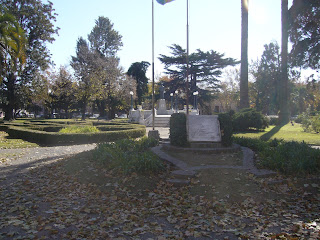 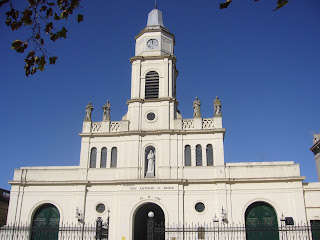 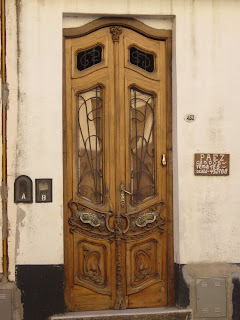 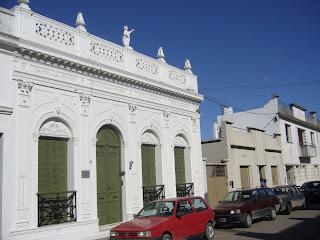 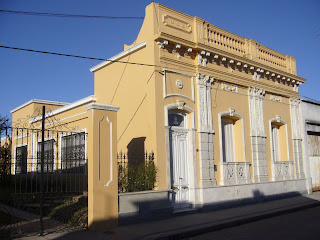 We went for dinner at Sudestada (fitzroy/nicaragua) on Saturday night. I hadn't been for well over two years as the last time i went i thought it was a bit rubbish. Times have changed. I went for the green curry which was really good and pretty spicey and the girlf had the bo luc lac which was also pretty damn tasty. Recommended.

And very finally-We arrived back in Santiago early doors on sunday morning. From having dangerously high levels of smog last week, Santiago is enjoying some winter sun. You could actually see the snowcapped Andes. A rare and beautiful sight. 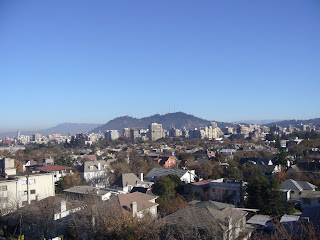 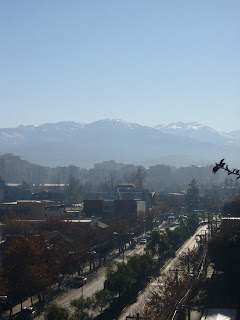 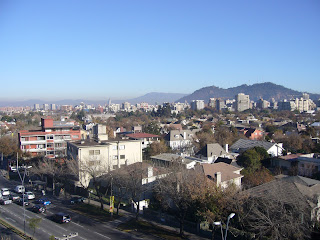 So the question-Do i miss Buenos Aires? Well, yes i do. But not as much as i thought i would. I thought going back would make me think that i'd regret leaving but it didn't. Usually, it takes a couple of months for me to pretty much forget my previous life/home and appreciate what i now have. That's what's happened. To a certain extent, i miss all the places i've lived-Dorset, Paris, Malvern, Tours, Sydney, Quito, Bournemouth, Ste Agathe (but not so much Birmigham or Santiago) but i wouldn't want to revisit those times in my life. I love BA but i also love Valpo. I appreciate what Chile can offer in terms of stability and economic prospects. Waking up and being able to see the Pacific is just brilliant. So yes, i miss BA but not enough to make me think that i should go back and do that part of my life again. Times change and people change with them.
Posted by Matt at 20:05

Nice post. I can identify w/ some of what you said -- the idea of different places being parts of different stages of your life and not needing/wanting to relive them. That's one of the reasons I ended up in BsAs when I fled the States rather than going back to live in Spain, where I had lived a few times before.

Your blog is great. Thank you for writing about our idiotic president. ;)

thanks cordeli@...i wouldn't wish kirchner on any country. Not even scotland...well, maybe scotland...but at least, not france... :)

What a shame I wasn't in town... when you were in El Ateneo, you were 2 blocks from my apartment! Inflation, inflation, inflation. And lots of warning signs. People don't seem to be paying attention as long as they have some extra income to spend.

Like Dan, I probably wouldn't want to live in Cádiz again, but I wouldn't rule out Spain in general. I think part of our personal development is so tied up with where we live that it would be impossible to go back. Nice post.

well maybe next time i'm in BA you'll be around for a quick coffee. i'll probably be back within the next few months for some event or other...

inflation...i don't know whether people don't pay attention or simply don't care-in the sense that argentines have got to be the most fatalistic people anywhere. they've been through so much, so many crises, so many nightmare that they just seem to accept that the bad times will be back so they simply enjoy life while they can. I think it's what gives argentina that intangible energy, that feeling that makes people fall in love with the country. It's a 'why not have fun today because there may not be a tomorrow' attitude. I envy it in a way as it's a really free way of living life. The downside is that it obviously creates a short term way of thinking that hinders the long term prospects of the country. A bit of a vicious cycle, unfortunately..