Work has finally started on the house. It's taken ages to get going as we've had to get plans drawn up for the house, engineers' reports and other such junk...although it's going to be a few months of work, i'm glad things are under way.

The good news is that the termite damage is not as bad as we thought. At first we thought it was fairly minor. Then we had a look under the plaster and it looked like it was awful and that the house was going to fall down at any moment. Now we've taken off all the plaster from the top level, we've found that we just happened to uncover the very worst of the damage a few weeks ago.

What's been done in the last few days is a general cleaning of the plaster in order to see exactly what we're dealing with. When i say 'plaster', it's not actually plaster. It's adobe, or mud, in stucco form. Most of Valpo's houses were built with a wood (oak) frame, a corrugated iron exterior and then adobe as insulation and as plaster in the interiors-either to cover with wall paper or to paint.

Between the corrugated iron and the stucco adobe, large brick-like blocks of adobe were installed. What happens in most renovation jobs in Valpo is that the adobe is ripped out and wire wool and polystyrene are put in its place. The reason? Adobe is heavy and everyone is desperate to lighten their houses in case of an earthquake. This is ridiculous; not only are you taking out the best insulating material there is and wasting money buying new stuff and forgetting that your house has stood, perfectly happy, through at least 3 major earthquakes and 100s of tremors, but you're also filling your house with chemical products. Not good, in my book. We're keeping the adobe. The engineers said it was fine.

The interior walls just had stucco adobe-the stucco was plastered on top of wooden slats. The quality of the workmanship is really amazing, way better than today's work.

The major good news regarding the lack of termite damage is that we won't have to re-build the structure with steel-it just needs reinforcing in strategic areas. That's a lot of cash saved and also a lot of time. We have to be finished by Christmas and New Year so we can watch the fireworks.

Here's just one room-you can see the quantity of adobe blocks. 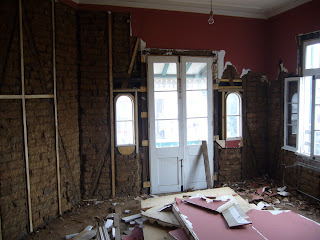 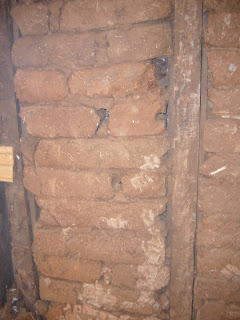 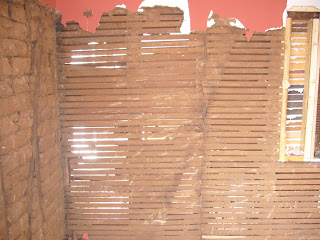 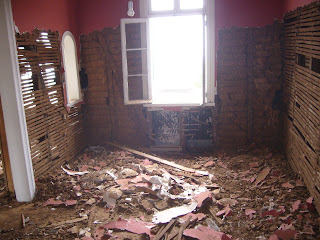 Each block weighs around 10kg. On top of these blocks used to be adobe plaster about 3cm thick, adding 100s of kilos more. We're keeping the blocks and dry-walling on top. 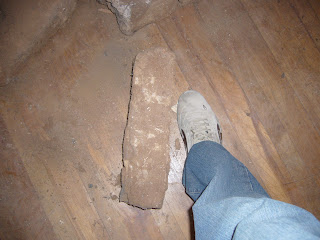 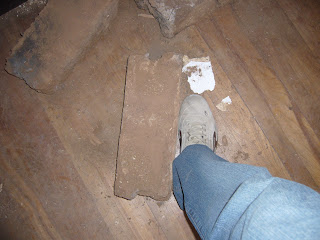