The house was finally clear enough to take some photos of the structure so here it is in all it's oak-y glory. What i couldn't get were any decent photos of were the foundations of the house and the part of the house that is part underground. The foundations are brick and go about 3-4 metres deep. On top of the brick a larger than usual oak beam was laid horizontally and then the vertical beams (also larger than usual on the lower-ground floor) were fixed in place. The diagonals are what really give the structure its strength. The part of the house that is underground has a wall of huge chunks of rock stacked into place and then mortared together. I'll hopefully get photos of both areas of the house in the next week when the builders destroy more of my previously perfect flat.

A few days ago we were living here. Now it's all ripped to shreds. It was important to see the state of the structure on the lower ground floor as it supports the entire weight of the house above. Luckily, it's all in pretty decent condition, only a few, minor, structural supports needed and we should hopefully be back in living there in 3 weeks. Hopefully. The lighter wood on top of the main beams is what was used to stick the dry-wall in place. 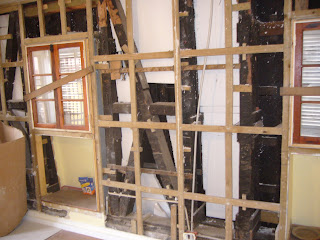 Anyway, this is a picture of an exterior wall in our flat downstairs. It's really strange- instead of filling in the space between the wooden structure with adobe, like on the 2 floors above, on this floor they used normal bricks. The architects and engineer hadn't see anything similar before. 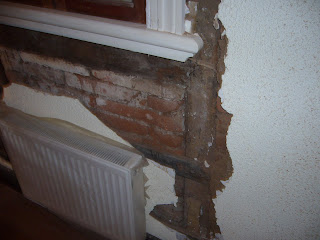 Here you can see the staircase down to the "ground" floor- ie the ground floor of the house above but not the separate flat below where we live (it's actually the first floor of the whole house for the british and second floor for americans and chileans) The ground floor for this part of the house is entered at street level. I'll refer to the flat below as 'lower ground floor'-you enter that level halfway down a staircase and it's partly underground. 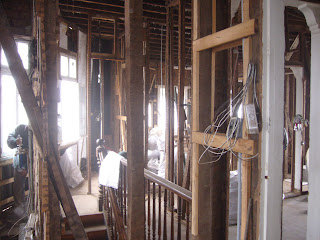 Here you can see the sheer amount of oak beams holding the structure in place. Most of the beams are structural although a few are just room-dividers. These walls used to be covered in adobe stucco. 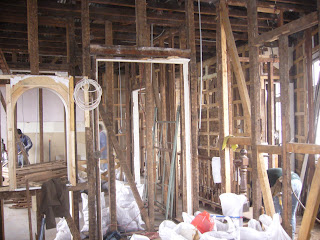 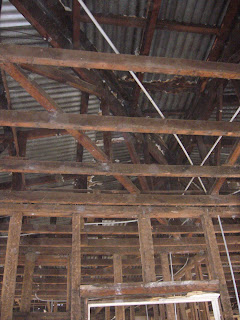 This is downstairs. The wall to the left is the main structural wall. Thankfully it's in almost perfect condition. 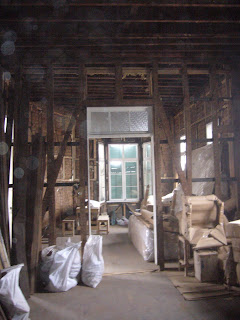 At some point in the past the house slipped a little down the hill most probably due to the constant tremors and minor and major earthquakes over the past few decades. It happened to all the houses in my street. It doesn't sound like much, but it slipped around 6cm leaving dips and hills and the floors leaning to one side. In other words: Not flat.

So what a previous owner did was level the floors by adding a new wooden floor on top of the original. The original floor was Oregon Pine, a wood that is now ridiculously expensive as it's quite rare nowadays. The floor on top is Rauli (i can't find a translation anywhere), which is also stupidly expensive. So we're going to save the original floor, bring it up to the new level of the house and keep the rauli- we have around 200m2 of floor we can save for a different project, which is great news. And we get to restore the house to its original form. Even better news. 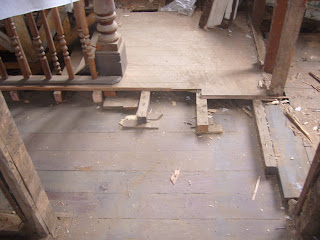 And finally..I've seen this notice loads of times in Buenos Aires but it's the first time i've seen it in Chile. It reads: 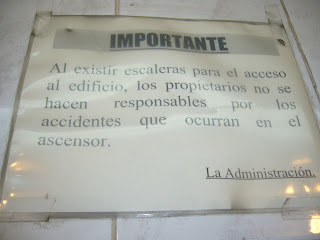 Due to the existence of stairs to access this building, the owners are not responsible for accidents that occur in the lifts.