So i've found out a couple of things about 2 photos of grafitti i'd posted.

Firstly, that this is in homage to Emile Dubois. For non-Spanish speakers, Monsieur Dubois was a French immigrant who defrauded the rich and also had a penchant for murdering them as well. Valpo being a slightly contrary city, this guy (who was executed for his crimes) has become something of an unofficial saint. His grave in the cemetery of Playa Ancha is a shrine and people go to him asking for favours. Seeing as the Catholic Church as an institution is crooked, corrupt and murderous i think he'd make a fantastic official Saint and a great role model for the Church. 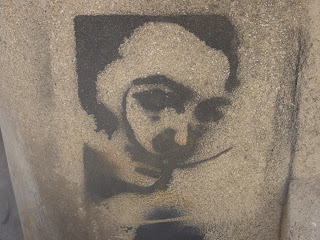 Secondly, this is what i wrote originally about the graffiti below:

"Don't know what that word means but the bottom line asks for the land-owner to die." 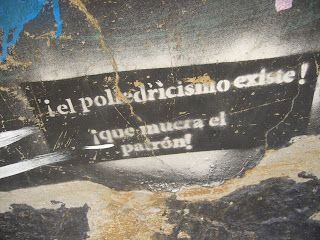 Turns out i've been the victim of a mathematical prank (mathematicians are well known for their sense of humour). I still don't know what poliedrwhatsit means but i do know it's some kind of mathematical pattern. In Spanish, the word "Patron" can mean "land owner/big boss man" and also "Pattern". So it should be translated as "Poliedrinoideahowtospellthisword Exists! Death to the pattern!" The clever maths geeks created stencil graffiti to look like left-wing propaganda and waited for simpletons such as myself to fall into their hilarious trap. Bugger.
Posted by Matt at 16:46