Something terrible happened yesterday. i'm getting over it...slowly! 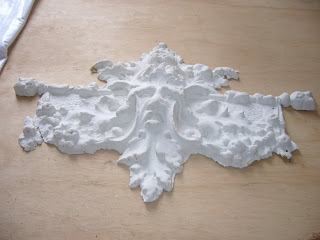 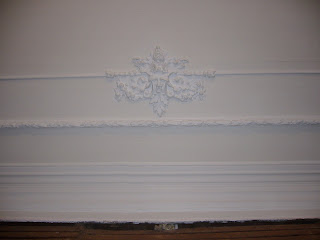 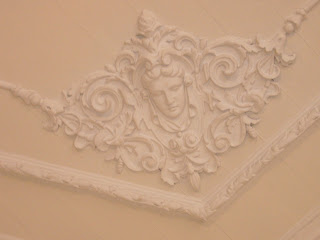 Due to the termite damage, we have to replace a lot of the wood in the ceilings so yesterday we cut around the moldings in order to rescue them. They're not plaster moldings as is the norm-they're made out of papier maché. They've lasted pretty well-they were put in place around 140 years ago and we managed to save them all. A couple are in poor condition but the idea is to take the best preserved and make plaster molds to put back on the ceilings when we get to that stage.

On close inspection on the papier maché, we found this: 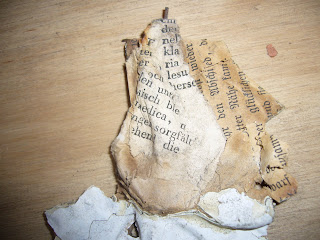 Yes. That's German writing. Horror of all horrors, i bought a German house. This is not good. An upstanding Englishman in a German house. I'll never live it down. To be honest, i'm surprised the house is still standing. I mean, we all know that the Germans are rubbish engineers and that the British are far better at all that stuff.

Still, i think i can live with the German-ness of the house. I think i'll look at it like this:- my great, great-grandfather was from the land of the lederhosen but he took the decision to leave Germany and move to Blighty. He changed his rather unfortunate name from Kuntzi to Conday. (Funny story: I learned of my German heritage during the Euro '96 semi-final between England and Germany. My grandmother decided it was the perfect time to announce very loudly that her grandfather was German-"You're part German, Matthew" is what she said. I was in Scotland. Surrounded by Scottish people. And we lost on penalties. I was a very sour kraut, as you might imagine!) Anyway, I think the house also chose this route. It wants to be English. After all, the previous owner was from the green and pleasant land as well.

Once all the rubbish is cleared away, i'll take some photos of the structure of the house. It's really amazing the way the place was built and the fact that it's still standing with minimal structural damage. I mean, the house is 3 stories high, built into and onto a hill, has one entrance at street level, another entrance halfway down a staircase, a couple of rooms that are, effectively, underground (despite entering almost at street level), from the terrace of the house the drop to the bottom street level is around 8-9 metres and from the top of the house down to the lower street level it's about 30 metres. Oh, and the house is built in the shape of a large ship. Seriously. In fact there's a photo of it somewhere on this blog. Try and find it... Anyway, the original owner must have been quite crazy.

Here's a photo showing the state of a few of the supporting, structural beams. Cheers, termite bastards. You're all going to burn in hell-or my fire place, at least... 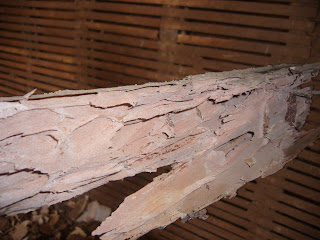 You are 100% right - the Germans are real bastards in engineering. Have a look at http://www.davinci-ireland.com

what kind of wood do you use for the frames out of interest. here in valpo, houses were built with oak frames and oregon pine floors, ceilings and anything else wooden. now we have to replace the damaged beams with normal pine which is a bit crap. we have to put bigger beams in to compensate for the fact that pine is much less dense.

you are deadly right! the Germans are messy engineers - watch this!!
http://www.youtube.com/watch?v=70lbI9Srvq0