I wanted to do a series of posts about Valparaiso's architecture and how it used to look compared to today. So i found a load of old photos of buildings downtown and their addresses from 1925 and headed out. Now, one thing i hadn't foreseen was that although the street names are all the same, they changed all the numbers. I mean, they're not even close now. Another problem was the 1985 earthquake that demolished a lot of old buildings. Some buildings that survived simply had their top floors chopped off meaning they're unrecognisable from their former glories. Another problem is that a lot of old buildings were demolished in the name of 'progress'.

So out of 8 buildings i had in mind, i found 2 that were still there. The other might be around somewhere but i walked for a long time and didn't see them.

The former Banco Anglo is now a Banco Santander. The angle was impossible for this photo. I don't know where the guy took the original from but my guess is in the middle of the fountain behind and with a wide angle lens. The building looks pretty similar but is now missing one of its spire-y things on the roof. It's a really beautiful building-the interior is incredible Some day i'm going to ask if i can take some photos of the details inside but i doubt they'll let me. It is a bank, after all. 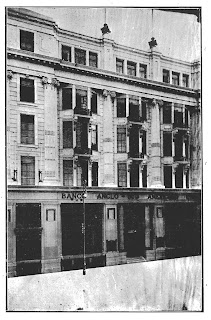 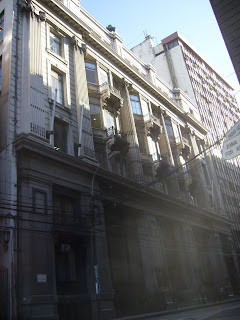 The former Banco de Londres is now a ServiPag-it's where you got to pay your bills because direct debits never work and you end up getting your gas and water cut off for the institutional incompetence of the Utility providers and banks. You'll notice that front porchy thing has gone as has a mini-floor in the middle of the building right at the top. Some of the decoration has been stripped off as well and the new windows are cheap aluminium. But at least it's still there. 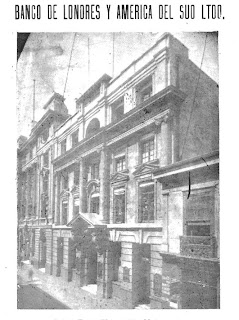 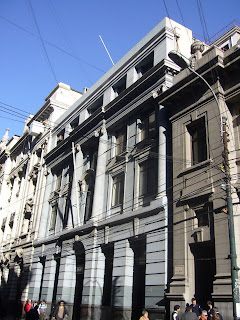 So, with my plans thwarted, i decided to investigate a building i'd been told about. I can't, unfortunately, remember the story behind the building, just that it was privately owned but with the door open all day long. I went to sneak a peak...the outside of the place is quite nice but the inside is incredible but in pretty bad shape. Have a look at the ornate wood carvings and the sheer quantity of plaster molds around the walls and in the skylight part. Some of the pictures in the molds are really cool. The building is on Serrano 543, between Plaza Sotomayor and where the gas explosion occurred in February. Definitely worth a nosey if you're in town. 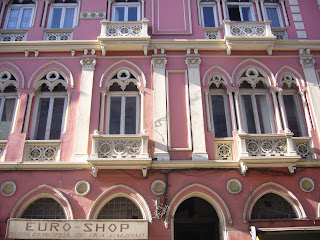 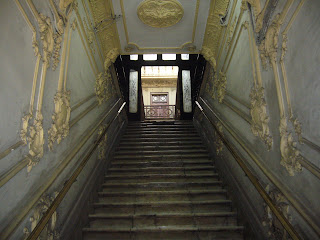 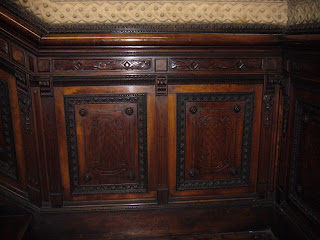 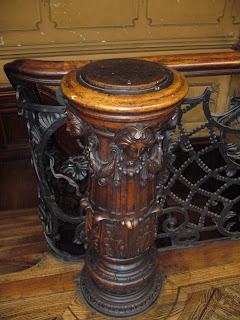 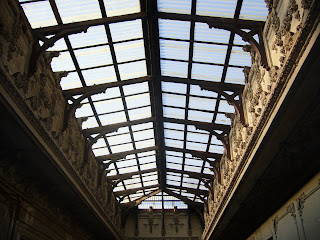 Hey, at least you tried. That's one of the best parts about doing a "then & now" post--finding out that everything has changed.

I'm always surprised at how many of BA's buildings have lost their original decoration. It's mainly due to the fact that it was made of plaster-concrete (as opposed to carved from stone). Time isn't kind to that type of deco.

Your pics of the last bldg are amazing... the wood paneling is da bomb. I really need to come to Valpo!

Just a leetle bit of care and the exterior decoration lasts for ages...problem is that Valpo's been in decline since 1914 when the panama canal opened. A lot of Valpo's greatest architecture has been lost through negligence, poverty, earthquakes, complete lack of respect for Chile's patrimony and a mix of all of the above. It's changing but i'm not sure if it'll be quick enough to save a lot of the buildings here....

let me know if you're thinking of coming over, i'd be happy to show you around.

Negligence is rampant all throughout Chile. Small town in Chiloé called Tenaún is home to some sort of pipe piano, not sure what kind, but there are only three of them in the world. Multiple offers have been made to buy it but the owners just kinda shrug their shoulders and refuse...but without doing anything for the piano either. It just rots in town's dilapidated and out-of-commission Pulpería (General Store) which, with some restoration, would make a classic Western film set.

If it weren't for the lush, verdant hills creating a backdrop for the magical blue church. In all fairness, the church at Tenaún is amazing and well-cared for. My impression is that overall churches get far better treatment than anything else when it comes to restoration. This is the one instance where I think the State could take some cues.

Hey Matt: I'm answering a previous comment on The Banks & Harrington Arquitecto, and generally about Architectural Conservation, which you have bravely taken on: One thing I have learned here in Ireland is that the very idea of conservation and the appreciation of your "Patrimonio" has more to do with memories than with education. Here in Éire, they demolished half of FitzWilliam Street during the 70's, one of the many Irish Georgian streets of such excellent quality, which is a crime in the same scale as the one that we are doing in Chile at the moment. They also left their own language to almost disappear for many years, especially by the scorn of the posh people of Dublin 4 or Dublin 6. And I asked one of the few Dublin Gaeoltóirí (irish speakers) left, as to why that was happening, and the answer was terrible: "BECAUSE IT MEANS POVERTY". And then everything else sunk into place. This is what our heritage means for many, many of us: Poverty, and hence it is despised as old, difficult, inútil, vane, or downright waste of energy. And now, that many of us have left and see other parts of the world and see how they saved (or not) their own, and now that the country is improving, we are only now beginning to understand what Mrs. Waisberg and others have been trying to say for decades. It is fear of poverty what make us scorn what is ours, not an uneducated but innocent eye. The French call it "La peur de manquer". Il est peut être comme ça chez nous. I found incredibly valuable what you are trying to do, so I'll try to dig as much information on the subject as times permits.
Saludos,

Santiago, thanks for the really interesting comment...the 60s and 70s were bad times in the UK and Ireland...so many important buildings were torn down to make way for hideous tower blocks. we starting to learn from our mistakes now. Chile's probably at the stage ireland was 20-30 years ago, where new is better. You're right-and i hadn't really thought of it that way before-Chileans are ashamed of Valpo because, to them, it represents an image of the country they don't want to see-poverty, neglect etc. This obviously then spirals as no one invests in the city and it becomes worse. Again, though, it's starting to change. There's a good group of local and foreign investors who really want to move this city forward and show the rest of Chile what Valpo is really all about. I hope we succeed!