So here are a few photos of Valparaiso buildings. My new camera has a much wider lens than my previous point and shoot so i've finally been able to get some of the shots i always wanted to.

Naval HQ down in Plaza Sotomayor 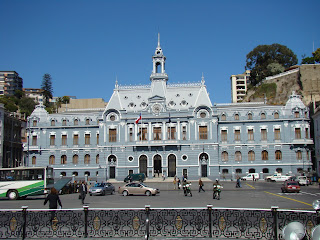 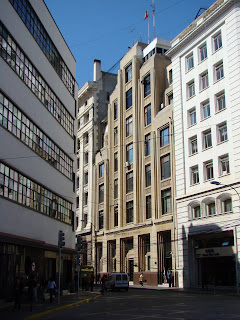 This building houses the entrance to the Ascensor Peral 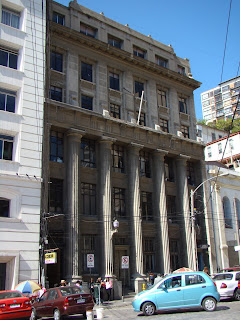 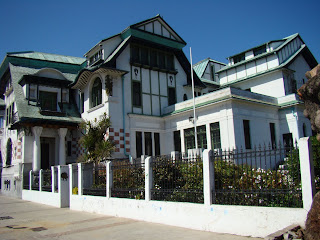 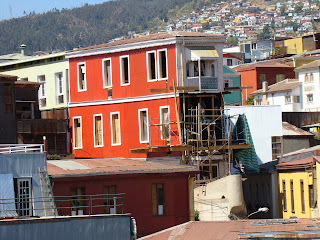 This is apparently going to be converted into either a hotel or lofts but it seems plans have been put on hold...it's a great building and perfectly located next to the Palacio Barburriza 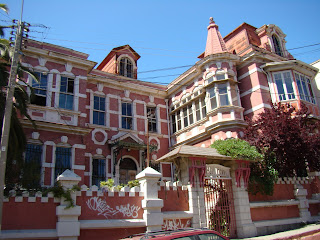 Ahh, La Casa Crucero, one of Valparaiso's most famous attractions. Every year, 1000s of tourists stop in front of this house to snap photos. 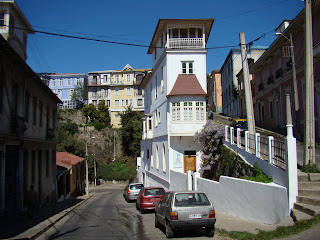 Long before the current craze for loft conversions hit Valparaiso, a German guy renovated this huge old school and did a fantastic job of it. Apparently, he didn't make much money off it as at the time (late 90s) most of Chile thought Valparaiso was a rat infested hellhole. Many Chileans still think this, but that's because they have no imagination or inspiration. 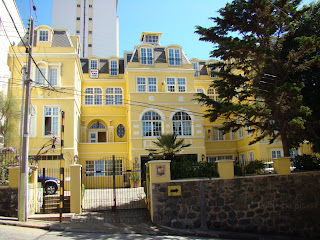 This is part of Valparaiso University. Next door there's a school...despite the changes and gentrification, Cerros Alegre and Concepcion still retain a family and student atmosphere. 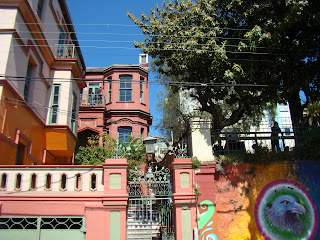 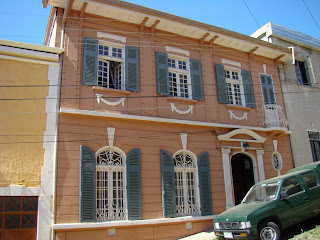 It's not just old houses that are gently decaying in Valparaiso 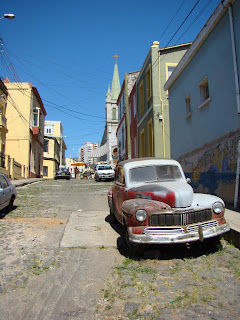 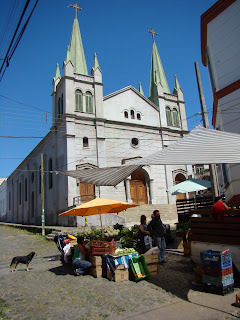 We visited this house last year when it was on sale. It was exactly like a Victorian house in England and reminded me of the houses in which i grew up 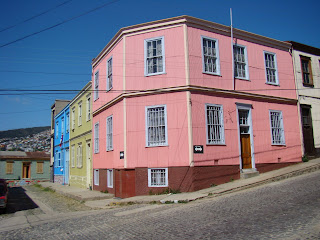 I love the detail on the underside of the sticky-out window (that's a technical term, by the way) 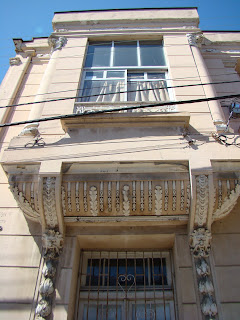 We also saw this property last year. It's being sold with the pre-approved plan to convert it into 5 lofts. I couldn't really get the numbers to work out but somebody else might. It's around us$180,000 if you're interested. 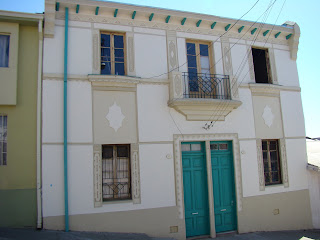 Just around the corner from me is this really cool old building from 1911. It's in a bit of a state and i hope it gets a good dose of gentrification soon... 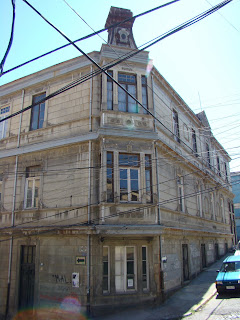 That's it for now. I'm working on a piece about one of Valparaiso's most famous and prolific architects at the moment. It's going to involve a long walk around Valparaiso on a beautiful, sunny day, snapping photos of some of the nicest buildings in the city. Blogs are hard work...
Posted by Matt at 11:14

What kind of camera did you get?

i got a sony dsc-h9. i quite like although the zoom button is in a really annoying place that i hit by accident all the time. still getting used to all the functions but i takes pretty decent pics.

I think the term for your 'sticky out' window is a cantilevered window. Great pics, nonetheless! I'm a porteno de corazon residing in Melbourne Australia. I really enjoyed the photos and your entries - particularly the one on La Republica Independiente de Playa Ancha. My parents are born and bread Playanchinos and I lived there for a small part of my childhood before coming to Australia in the dark days of the early 1970s. Anyhow, this has brought back some good memories and I now cannot wait for my imminent return to 'Pancho Gancho' in early 2008!

will this be your first trip back to chile since you left in the 70s? one of the girlf's aunts left chile after the coup and headed to france. her first trip back was just a couple of years ago and she spoke a really weird 1970s form of chilean spanish. people under the age of 30 couldn't understand a lot of the phrases she used..!

Actually, I prefer your terminology as well. This will be me fourth time back. I went back in '81 with my family (I was only 10 at the time). Whilst it was good to see my extended family once again, even as a kid I sensed a real level of restraint and tension in people. It was a little unsettling. I then went back for 6 months in 94 after finishing my university studies and loved Chile and Valparaiso, in particular. My last visit was in 99 for a month and a half (my bastard boss would not give me a square two months).

The last two visits have helped me brush off my quaint (and very embarrasing) 1970s manner of speaking - oh! and my parents get TVN on cable helping me keep up with the latest chilenismos.

Keep up the good work with the blog and your renovations (it looks great!).

hey patricio...a quick question...do you see yourself as australian or chilean? a couple of years ago, i met an aussie-chilean who was on his fist ever trip to chile (he was in his late 20s and was born in Aus). He was more chilean than the chileans...a lifetime of TVN had ensured that...but he still thought of himself as an Aussie first. At that point, i obviously had to stop talking to him :) As you were born here and spent some of your childhood here, i assume you see yourself as chilean first...?

A good question....a ver....I am very proud to call myself an Aussie. I love many aspects of Australian society and I am very grateful for the opportunities this country has given me and my family. Culturally however, I will admit that I am drawn to Chile and Latin American culture in general and have a genuine interest in what is happening over there.

I guess I consider myself Australian first and Chilean second primarily because this is where I grew up and because I'm really happy here. That said I still hold a special love for Chile...I must admit I have struggled the few times Chile and Australia have had to play football against each other! International play offs are a good test of allegiance.