I haven't really mentioned 'downtown' Valparaiso up to this point. There's a reason: 'El Plan' as it's called (due to the fact that it's flat while most of the city is built into the hills) is a complete nightmare. For those that know Buenos Aires, think el Microcentro around Reconquista and San Martin. At 5.30pm. But all day long. The Plan isn't really very big-at least the part where most people work ie Plaza Sotomayor to Plaza Victoria-but it's just a couple of narrow streets, one going in one direction the the other going, well, the other way. Along these two clogged streets run 498,789 bus an hour, 2 million and 4 cars. And the electrified Trole buses which frequently break down, making the 2 lanes that are already a bit tight into one exceedingly narrow path for everyone.

So i generally try to avoid El Plan, preferring the village like tranquillity of Cerro Concepcion. Which is actually just 3 minutes walk from the raging hell of downtown. When i am forced to venture down, i try to make it around lunch time as we found a little while ago the best and cheapest restaurant around. It serves my favourite chilean dish of oven baked chicken, rice and tomato salad for the princely sum of 1350 pesos. Or around us$2.30. Not only that, but the decor is absolutely brilliant. So if you're unlucky enough to find yourself downtown on a weekday (on weekends there's no traffic and you can walk around and admire the fantastic architecture-post coming soon-at your leisure), make sure you stop off for lunch at El Mastodonte. Not sure of the exact address but it's on Esmeralda just before Plaza Anibal Pinto (where you'll find the Riquet until it closes down shortly). You can't miss it, it's got a giant Woolly Mammoth head outside. 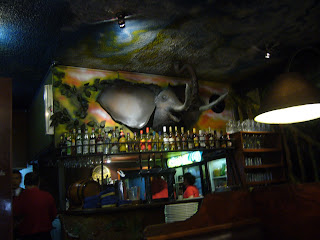 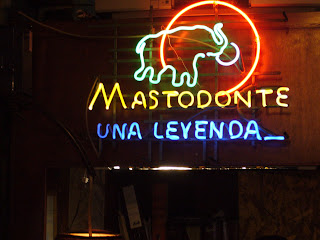 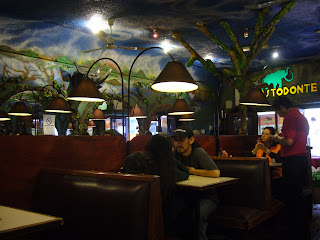 My second restaurant review is of one of my favourite places to eat, Allegretto Pizza, which produces some of the better pizzas i've had outside of Italy. The owners are an English-Chilean couple. Proper thin crusts, quality ingredients and huge: One between 2 is more than enough. The basic model is about 4000 pesos and then you add a couple of toppings. We tend to go for Parma ham, fresh tomatoes and sometimes prawns and we've not had a bad experience in the place (except when one of us decided to try to gnocci which was not the best idea, stick to pizza). The bill for 2 people with a pint of locally brewed Cerveza del Puerto is around 10,000 pesos or us$20 and is a bit of a bargain. 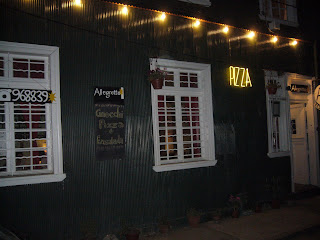 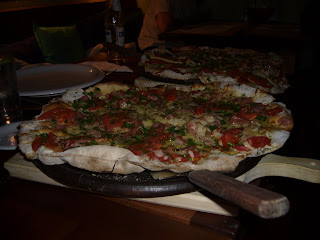 We went to Allegretto a couple of nights ago with a friend, it's probably the 6th or 7th time in the last 3-4 months and as i mentioned, we've not had a bad experience, nor have we seen any of the other customers have one. Except this time, when a couple of middle-aged french women sat at the table next to us. They proceeded to bitch and whine about everything; the table was wonky, the glass was smudged, the plate was dirty (both changed with the minimum of fuss), the pizza took too long to arrive and then when it did it wasn't very nice. This despite the fact that they polished off the entire thing, including pretty much every single crumb. They then paid and left a derisory tip. It's a shame the world's not perfect like France, eh? I don't know why they even bothered to leave the land of liberté, egalité, fraternité when everthing that´s not french isn´t worth contemplating. 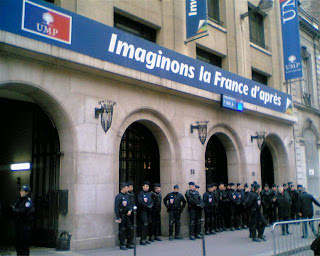 Not that all frenchies are alike, of course...in fact we've got a fantastic french restaurant run by nice, friendly, real french folk that'll be reviewed next time i'm feeling a bit peckish around lunchtime.

Allegretto is on Pilcomayo, opposite the Iglesia Anglicana on Cerro Concepcion.
Posted by Matt at 12:48