This should have gone up before the post about the South but i, er, forgot that we went North a couple of weeks before heading South...

Anyway, we went up to the Valle del Elqui because our house was being fumigated against the termites eating it inside out. Valparaiso is, unfortunately, almost completely infested with the little structure munching bastards, the climate being quite termite friendly and the fact that 90% of the city is made out of wood is a bit of a come-on as well. So for the week we had to leave the noxious chemicals do their work we decided to go for a short trip. We had to take the cats with us as they might well have died had we left them in the house. Well, they would have died. There are no decent catteries in the area that we found unfortunately so we had to take them. They're pretty used to travelling around now but i don't think they like it too much.

We went straight to a cabana complex just outside of Paihuano which was pretty decent. Paihuano doesn't offer anything really but it's a good base to see the other villages in the valley. Montegrande is the next one along and is where Gabriela Mistral was born and lived most of her life. Mistral is one of Chile's Nobel winning poets (the other being, of course, Pablo Neruda). The village is pretty much a shrine to the child-abusing, Catholic extremist lesbian (in the Rough Guide she's described as such, but possibly not in those words) and since i believe poetry to be the most tedious of all art forms and the girlf not being particularly interested either, we skipped the museum and grave and took the side road to Cochiguaz and down into the Valley. Cochiguaz is where a bunch of hippies moved to after deciding the the Age of Aquarius had shifted from the Himilayas to the Valle del Elqui sometime in the 60s. No, i don't understand either, but if anyone does: please explain. It's a very pretty area but i didn't see any UFOs or other signs of strange hippy weird happenings but maybe i just missed it all due to my cynicism. Maybe only the truly open-minded see all that crap.


There's not actually all that much to do anywhere in the Valley, it's more about looking at the scenery and getting drunk on the Pisco which is distilled in the area. All of Chile's pisco grapes (moscatel) are grown in the valley and there are all the major companies happily distilling them into various different piscos. Oddly enough, however, Pisco is more expensive in the off-licence (botilleria) right next door to one of the distilleries than it is the El Tit in Pucon. Maybe someone can explain that to me as well... 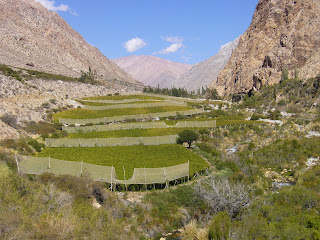 The next town along, Pisco Elqui was originally named La Union until a nationalist mayor decided to re-name it so as to further boost Chile's claim that it invented the alcoholic drink, Pisco. Peru and Chile have been involved in a long, long running feud as to who invented it (and who has the best sea-food, and where the hell the border should be amongst other things) and since Peru has a city called Pisco, the mayor thought it only appropriate that Chile should have one as well. Pisco Elqui is probably the nicest of the 3 and the best equipped. It's got the best restaurants, best hotels and best infrastructure. It also has a really nice square to chill out in. Because it can get hot. It only actually rains a few times a year. The valley receives around 300 days of sunshine a year, which is more than England gets in a decade i reckon. A few kms up the dirt track from Pisco Elqui is Horcon, a heavily marketed 'Pueblo Artesanal'. This always translates to me as a) Tourist trap and b) bag of shite. Horcon is not really an exception although it has been recently purpose built and designed quite well. It's still full of spiritual new age nonsense and there was even some idiot playing the frigging didgeridoo. I hate the didgeridoo and firmly believe that any non-Australian aboriginal playing one should have it shoved right up where the sun will never shine. So we left pretty sharpish after eating 2 of the worst empanadas i've had anywhere on this continent. We were served 8. 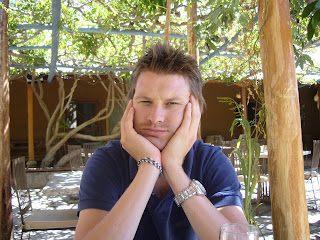 One day we decided to drive to the Argentine border, for no other reason than we were a little bored. The drive is pretty nice as it turned out and once we got to Chilean customs we decided to follow the signs to one of the mines in the area. The scenery was spectacular with the mountains changing colour at every corner. We finally arrived at the mine at around 4000m altitude and despite there being a sprinkler system on and the mine looking all new and shiny there was no one home so we had to turn back. We picked up a local hitching a lift to Vicuna 2-3 hours drive away (luckily for him we were going just there) who told us the mine is currently abandoned and the reason why the river running down the mountain looked such a beautiful colour (although in the photo it looks a kind of sick-yellow for some reason) was because it was poisoned with arsenic. Well, if poisoning the world with arsenic turns everything that colour, i say we should start pumping it out in the air and injecting it into the ground.


Abandoned mine, views from the road 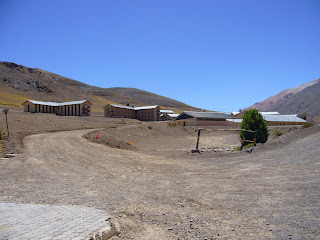 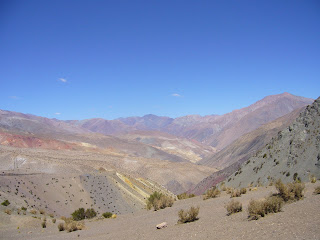 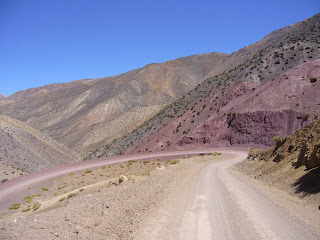 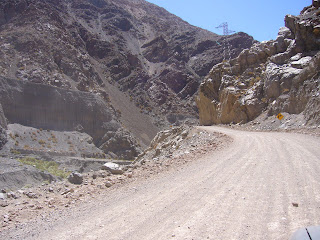 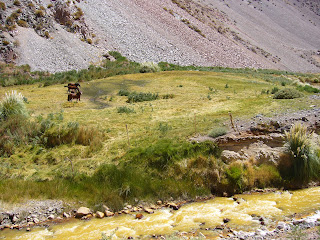 The day after we headed to La Serena for the day. The city centre is a masterpiece. A mayor early in the 1900s decided he wanted the city to look like a proper colonial city and as such all buildings had to be built in that style. The result is brilliant. Shame i forgot to take any photos. We then headed down to the beach which is huge and pretty cool with the mountains in the background. There's also a view of Coquimbo, La Serena's upstart brother along the coast and where the 'Monument to the 3rd Millenium' appears to be constantly giving La Serena the finger. Nice.

On the way back to our cabin i was stopped by the police for speeding and ended up with a 25000 peso fine (us$50). Bastards. Normally when i'm stopped by the police in south america i do one of 2 things. Give them money (as in ecuador and argentina) or speak bad spanish and say how much i love the country and its people (Chile-the police here are honest and unbribable, sadly. And, obviously, happily for the lack of corruption is one thing that makes Chile unique in Latin America). Unfortunately, i was with the girlf who is Chilean so there was no pretending not to speak spanish and i was also travelling with my expired passport so i thought it best just to own up and take it on the chin. Still, it was pretty unfair; Chilean police have green uniforms and this bastard was hiding in the hedge on a bend. That's just not cricket. It's funny; every country i've ever driven in i've been stopped by the police for speeding or some other minor infringement but i've never been stopped or been caught speeding in England. I guess i just know the rules of engagement a bit better over there...

Beach at La Serena and Coquimbo giving its neighbour the finger 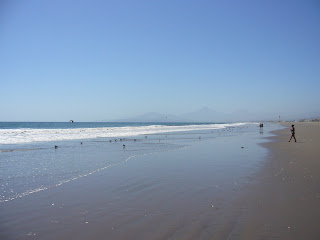 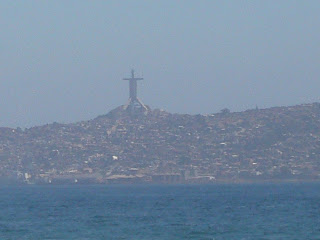 So, all in all, La Serena and EL Valle del Elqui get a rating of 5 thumbs up, missing out on the 6th due to the actions of the nasty police in the area lightening my wallet of 25 quid.
Posted by Matt at 18:23

Elqui valley Famous for its futuristic observatories, seekers of cosmic energies, frequent UFO sightings, poet Gabriela Mistral and quaint villages, this is a truly enchanting and enchanted – area, and one of the must-visit places in Norte Chico.