So this post is a kind of comparative post to one on Robert's Buenos Aires Blog Here in Chile, the navy also has a training ship, called the Esmeralda, and new officers go on a one year around the world trip. It's quite a nice way to end your training i should imagine. Sailors get a big send off and a warm welcome back. I'm not sure if this is just a South American thing or whether it's common in navies around the world. In Britain and the US, new officers are sent to their deaths or prison camp in Iraq (and sometimes, 'accidently', Iran) or Afganistan. Which would you prefer; a couple of weeks in an Iranian jail or a one year sojourn aboard a giant yacht?

(I haven't bothered to double-check my 'facts' about the Esmeralda; i just accepted what the girlf said, which is always a risky business so if anyone wants to chime in and add to the story, please feel free).

UPDATE: I've just found out that the Esmeralda was the boat captained by national uber-hero, Arturo Prat , who did one of two things, depending on your point of view: He either died a hero during the War of the Pacific , choosing a glorious death when confronted by the Peruvian iron battle ship the Huascar; or some kind of nutter who not only got himself killed but most of his crew who would have most probably preferred a swift getaway to certain death. Every town in Chile has a street named after A Prat. Actually, in recoleta cemetary in Buenos Aires there's a tomb to an A Prat which i imagine is simply coincidence, but there may be a family connection (Arturo's remains are here in Valpo). I'll try to find out

The 30 minute boat trip around the harbour is well worth it. Cost is 1000 pesos ($2) per person or you can hire your own private boat for 10,000 pesos which is a far more pleasant way of doing things. You get half an hour around the harbour and it's probably the closest you can get anywhere to a fully operational port. The views back to the city are spectacular and the close up views of the dry dock are quite impressive as well. You also get a view of another pack of lazy Chilean sea-lions who commandeer the fishing boats when they're not in use. 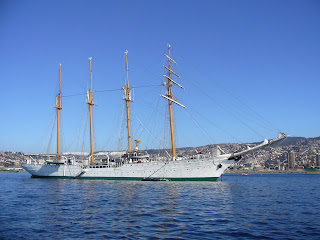 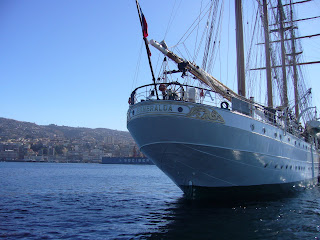 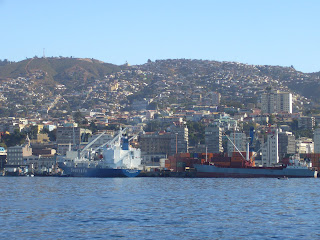 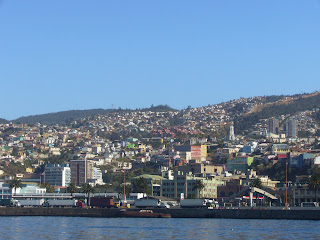 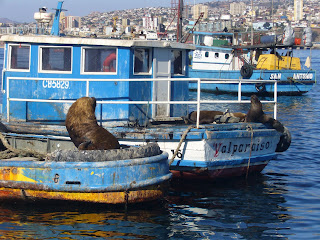 Dry dock-to get an idea of the size, the ship being worked on is about the same size as an average cruise-liner 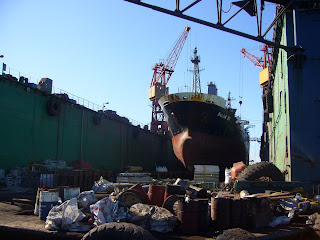 Hey MAtt:
Now I can put my nosing instincts to some use here! It's about "La Esmeralda": Since you are so flabbergasted with Cochrane, it might be of interest to you that it was because of him that we have a ship called "Esmeralda". It was his part of his first job as a Chilean Naval Officer, once he got here. In a raid to El Callao, in Perú, then part of the Spanish Empire, he successfully captured this sort of flag ship in November 1820. So deserving of his reputation as a daring sailor and so impressed was O'Higgins that in his honour, that from then on, there was always an "Esmeralda" in the Chilean Navy.
Prat's Esmeralda was the 3rd or the 4th one I think.
Saludos cordiales,

Cool, thanks for that info...i was always confused by the mention of the Esmeralda at every point in Chile's 19th century naval history...! I wondered how it had stayed afloat long enough for Prat to get his hands on it!