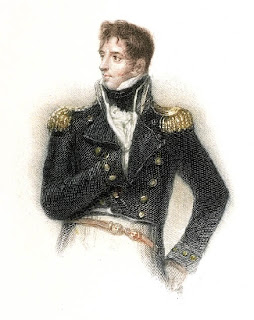 
Most people in the world haven’t heard of Scotland. Those that have mostly think it’s a small province in the north of England. And they’re pretty much correct. I mean, why would anyone have heard of Scotland? Ask yourself: What have the Scottish ever done for us?

If you’re Chilean, however, you might have reason to be thankful to the wind-swept land of the gingers for it was, if you can believe it, a Scotsman who played a mighty hand in liberating Chile from the dastardly Spanish.

Lord Cochrane is almost as famous in Valpo as Arthur Prat and quite rightly so. Valparaiso is a huge shrine to his achievements with a Lord Thomas Cochrane musuem, a large part of the Naval Museum dedicated to him, a street named after him and a large statue and obelisk in one of the squares. I haven't got around to going to any of them yet (except the street), which is a little shameful, but i'll hopefully get there in the next week or two. Anyway, in my humble opinion, Cochrane should be up there with Nelson (another slayer of the Spanish) as one of the greatest naval warriors of all time. Being English, i only know of British naval warriors (actually, my pre-20th century history is remarkably poor so Nelson's really the only one i know from any country); let me know if there's anyone else who should be considered.

So how has Cochrane won me over? I mean, he has a number of usually fatal flaws:

(I should probably point out now that my old man's a ginge and my cousins are Scottish. What a family, eh?)

However, the guy on whom both Captain Hornblower and Jack Aubrey (think Russell Crowe in ‘Master and Commander’) were based was a different kind of man. By the end of his life he was revered not just in Chile but also in Brazil, Peru and Greece. That’s some going for a man who made political enemies out of pretty much everyone higher-ranked than him.

Cochrane came from an aristocratic Scottish family that had fallen on hard times, mainly due to his father’s decision to give up a career that was going nowhere in both the Army and the Navy (but paid the bills) in order to become an inventor. His main invention was actually rather good- a way of water proofing wooden ships- but he failed to realise that the ship-wrights were in cahoots with the Navy and it wasn’t economically convenient to the rich families to have boats stay afloat longer than their natural life. Cochrane noted this corruption and railed against it during his entire Royal Navy and political career in Britain. For this reason, the Navy kept giving him rubbish ships to sail and sending him on far-flung missions where he was unlikely to see any action and therefore not earn any prize money.

Despite this, in just over 6 years he became famous throughout Britain for his daring recklessness that saw him single-handedly board a pirate ship, sink a Spanish frigate with 7 times the firepower and “In 1805, he captured so many Spanish treasure ships that his personal share of the prize money was £75,000”.****

However, during this period he feuded so much with his superiors that he made high-ranking enemies for life.

Due to his popularity, Cochrane decided to stand as an MP in Devon. He lost his first attempt dismally and the election ended in a mass brawl. Next time around he managed to trick the voters into believing he would pay them more than his opponent for votes and he won (such blatant vote buying was common at the time.) He didn’t pay them a penny but he had his foot in the political door.

To stop him attending parliament, Cochrane was sent off to war again. And again he managed to sink a load of enemy ships (French this time) in more risky but exciting battles and become even more popular with the public at home. Next election, he stood for Westminster, whose constituents were very partial to his anti-corruption politics. Westminster was also the most famous constituency in Britain and in the media-eye. Once elected, Cochrane sailed off to sink a few more Frenchies.

4 years later he was implicated in a City scandal that saw him jailed. It’s more than likely he was the victim of a set-up. But, never one to lead a quiet life, he escaped from his cell using the age-old method of tying a load of sheets together. He then returned to Parliament after his loyal followers paid off his fines: Cochrane was bankrupt and in desperate need of cash.

Luckily for him, a group of ‘Chileans’ sent by Bernard O’Higgins in London made him an offer: to take charge of the newly formed navy of that wannabe country. Chile was in the throws of its second attempt to kick the Spanish out. The first lasted not very long. Spanish ships stalked the Chilean coastline which made it nigh on impossible for Chile to really declare itself ‘independent’. It needed someone to oversee the navy and slap some Spanish arse and Cochrane was ideal.

His plan, notionally backed by O’Higgins was this:

Cochrane described Napoleon as ‘the greatest man in the Tide of Time’. A bit of a fan, I reckon.

Unfortunately, there was news of a Spanish attack on Santiago and there was no time to waste; Cochrane travelled directly to Chile and his plan with Napoleon came to nothing.

Cochrane’s early months in Chile were as frustrating as his time with the Royal Navy. He quickly made enemies of the other British mercenaries working in Chile. He was not given the supplies or the manpower he craved and his early battles in the north of the country didn’t really come to much. He did, however, learn that taunting the Spanish even without doing them any damage would make him a popular man. He arrived back in Valparaiso with his reputation as a hot-headed (remember he was a ginger) hero intact.

He did, however, need some real success to justify his existence. He started to look south. Valdivia was one of the most impregnable fortress towns in the world. It was the head-quarters of the Spanish colony in Chile and unless it fell, Chile would never have a chance as an independent nation. This obviously didn’t stop our hero. After a couple of initial fact-finding sorties, he worked out a plan to capture the city.

Valdivia is up a rather long estuary. All along the estuary the Spanish had built huge forts and the entire river was basically a death-zone. Cochrane captured the city in a matter of hours by tricking the first fort into believing it was under attack from a huge an unbeatable army. It triggered a chain reaction along the river with each fort surrendering in quick succession. It must have been slightly annoying to find out that they’d just surrendered to a couple of hundred of severely under-equipped Chileans.

Cochrane took the most important Spanish base in Chile for the loss of two, yes two, of his own men and paved the way for the liberation of the entire country. It’s O’Higgins who gets the plaudits for leading the country to independence but it was our fun-loving Scotsman who did the dirty work.

He returned to Valparaiso expecting a hero’s welcome. He got it, in part. However, he also got hassle from San Martin, the Argentine liberator who was helping O’Higgins beat the Spanish, due to conflicting political ambitions. He also didn’t receive the monetary rewards he was expecting for liberating a country and started quarrelling with pretty much everyone. Again.

So, instead of living in Chile as supreme ruler of the newly liberated country as had been his original plan, he accepted an offer from Brazil to lead their navy against the imperial forces of Portugal. He then went up to Peru and helped San Martin spank the Spanish. He returned to Chile to live on his vast estate in Quintero before an earthquake practically flattened it and then sailed off to Brazil in 1823 to liberate that country. He kept in contact with the new Chilean administration only in order to demand further payment for his heroics, something he finally received over 20 years later.

Cochrane died in 1858 having been forgiven by the British Establishment and the Royal Navy. In his 81 years, he had fought the Spanish (3 times), the French, the Portuguese and the Turks and come out on top every time. That’s really not bad going.

It’s for this reason that I reckon he’s a ginger Scotsman that’s worth his weight in gold. However, outside of Chile, he’s not really famous and that’s an injustice that will probably never be righted.

****quote taken from the brilliant book Pinochet in Piccadilly by Andrew Beckett from which i nicked a fair bit more info for this post
Posted by Matt at 19:37

Matt thanks for putting me on to 'Pinochet in Piccadilly' - Cochrane and North are very interesting characters.

The most interesting part of the book for me though, is when the author meets a haughty upper-class Chilean in Valdivia sporting a panama and blue polo-shirt. I saw those types all the time when I taught at a British colegio in Santiago.