Well i'm back from my trip down south. Hopefully i'll have a bit more time on my hands to start posting a bit more although we've got a lot to do in the next few weeks, months and years...set up a business, renovate a large part of our house and otherwise enjoy life...but i'm going to try and keep things updated and based on the original idea of a one-stop Valpo info site. We'll see...

Anyway, we got back from a 2 week trip down to the Lakes District, a part of the world i really love. A mix of Germany, Switzerland, Brittany and the best of the English countryside. And with the German influence, there's beer with flavour, great cheese and my favourite meat of all time...kassler pork. So i'm now quite fat.

We drove a total of 3557km (starting from Santiago, not Valpo as the car needed a service before leaving). We probably did around 8-900 km of dirt roads in that total. Bouncy. And pretty dangerous at 100km/hour but you'd never arrive anywhere at 50km/hour.

Our first stop was Lebu, a small sea-side town an hour or so south of Concepcion. To be honest, it's pretty rubbish but it's got a really nice beach. Which of course you can't really use to its full potential as the water is so bloody cold. But hey, it looks pretty. if you're ever passing through Lebu, be aware that the best hotel in town and the only place listed in LP, Rough Guide and Guide du Routard is not very good. In fact it's rubbish.

So after a night in Lebu, we continued down the coast, past the only salt water lake in South America, Lago Budi (not really worth the 3 hour detour) and ended up in Valdivia. Now this is the start of the country i love. Valdivia is a really nice city. It's got a beautiful setting and the town is chilled out and has a good atmosphere about it. It also has the Kunstmann brewery where you get your own tube of beer with a tap on it over dinner. Really good food, good beer and absurdly cheap taxis. A good combination. Valdivia also has a cool little fish and fruit market where a bunch of too-lazy-to-catch-their-own-food sea lions wait for the market sellers to chuck them the left-overs. I liked Valdivia. 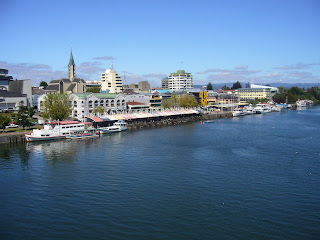 From Valdivia we headed on down and across to Puyehue and stayed at Aguas Calientes, a hot-spring resort with surprisingly nice cabins. Lagos Puyehue and Rupanco next door are beautiful and the Puyehue park is also pretty nice. The volcanoes surrounding the lake are also quite cool. 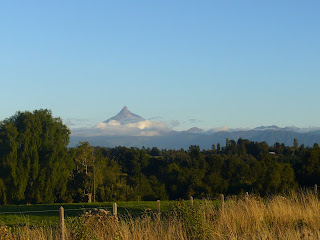 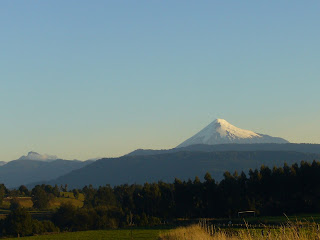 After a couple of days rest in Puyehue we went on down to Puerto Varas, stopping off briefly for Kuchen in Puerto Octay and Frutillar. Puerto Varas is my favourite town in the lake district. Good accomodation, great food and drink and an amazing setting. I could probably live quite happily in Puerto Varas. My girlfriend would be bored stupid though after a couple of weeks. 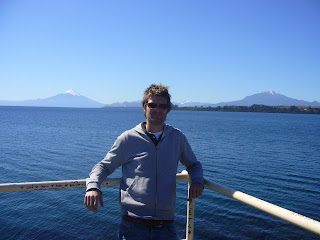 Anyway, the next day we made a day trip to Chiloe. We went to see the penguins at the penguin colony. March is the last month they're there until October so we hoped to see at least a few penguins. Well...we saw a couple. Through binoculars. The guide at the Otway Foundation said he didn't want to waste our time and money taking us on a boat trip. But the beach was pretty and we then decided to just follow the track to its end and stumbled across an incredible deserted and secluded bay so the trip was worth it in the end. That was pretty much all we did in Chiloe. 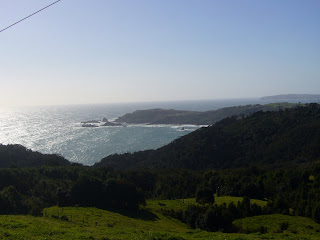 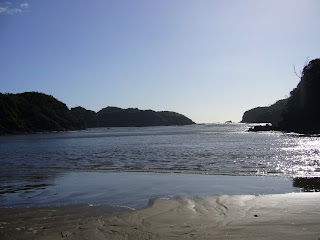 Back in Puerto Varas, we decided to do a lap of Lago Llanquihue, stopping off at the Saltos de Petrohue and Lago Todos Los Santos. Both well worth the effort to visit. Lago TLS is amazing and has incredible views of the various volcanoes in the area. From here we headed up to Villarica. 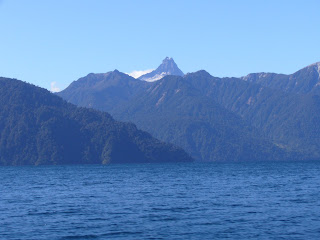 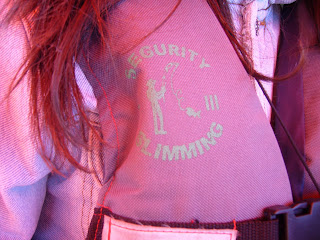 I'm not a great fan of either Villarica or Pucon but there are a huge amount of hot springs around and my young-man's bad back was giving me grief after so much time in the car so we decided to spend 2 days in different springs. Pucon does have at least one thing going for it in my mind:

Its very own comedy supermarket 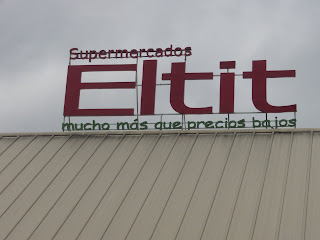 It also has access to some top white-water rafting, climbing and trekking but the place still leaves me a little cold. However, Puerto Varas is starting to rival Pucon as the adventure capital of the Lake District and i'm more of a PV person.

First day we went to the Termas Geometricas, so named because the complex has been developed to have 20-odd pool in various shapes. The place is amazing and even better in mid-March when there's no-one else around. Pricey at 12k pesos for the day but well worth it. After a day soaking in different pools we looked at the map and saw what appeared to be a scenic trip through Villarica National Park. On the map it's marked as a gravel road (ripio), which are always in pretty decent shape. They're a step above dirt road. So when we entered the park and found the road to be little more than a rock, log and root strewn hell we assumed it was just a small section and it'd soon improve. It didn't. We spent the next 2 and a half hours crossing the park (a mere 17km on paper), slightly panicking as it was getting dark. It only got really scary a couple of times when i had to get out a mend the bridge we had to cross and then when we had the car on 2 wheels (diagonally) going down a hill and round a corner. Luckily it all turned out well and i'd heartily recommend the trip to anyone else stupid enough to take it on. The photo doesn't really do justice to the nightmare we had to drive along.

Termas Geometricas and the road from Hell 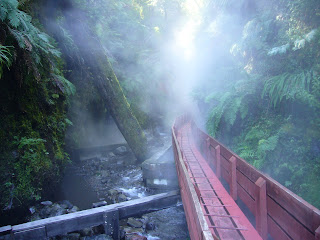 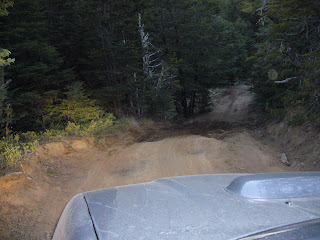 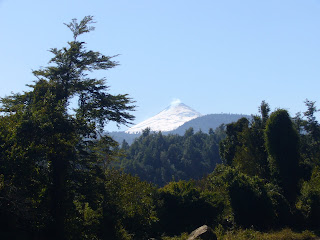 Next day we went to another hot spring. It was rubbish and there was no excitement.

On the way back up we decided to drop in (after a quick lunch at Los Saltos del Laja) at Pichemelu, Chile's most famous surf town. It's a pretty cool place, has a couple of surprisingly nice bars and a great restaurant to eat at. And it's only 3 hours from Santiago and Valpo so i think we're definitely going to head back for a weekend trip at some point. 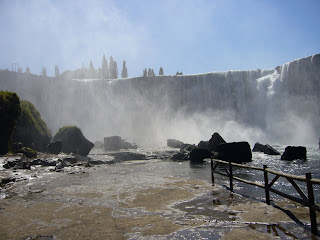 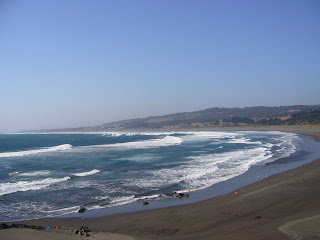 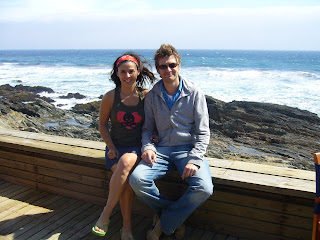 So that was pretty much the trip. A really cool couple of weeks. And, incredibly, it only rained once in the entire time, something which is unbelievably uncommon in the South.

As an end note, the entire trip would have been a complete nightmare had we done it in January or February. The only time to travel in chile is november or march. Good weather, no people.
Posted by Matt at 17:20

Carrying on from your "Eltit" picture, one my favourites is a very common street name, "A Prat". Also I've come across a shop in Santiago named "Pussy".
How about the common use in English of a "Walking Closet" or "Baby Sister".