So the builders did a bit of work today. The idea was to uncover part of the original structure of the house to see what condition the beams and supports are in and to see how much damage the bastard termites had done. Turns out quite a lot. Our original renovation project has just doubled in size. We expected bad news but it's worse. The bastards have eaten quite a fair portion of the beams that are holding up a 3 story, 140 year old house. 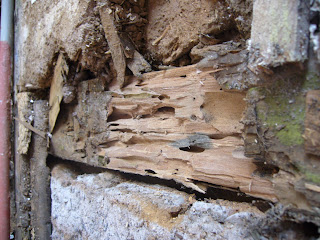 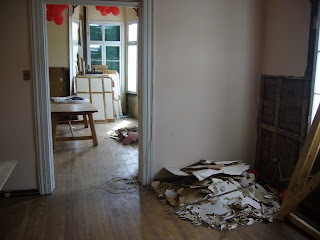 We found this original wallpaper from probably over 100 years ago hidden under layers and layers of newer paper and dirt: 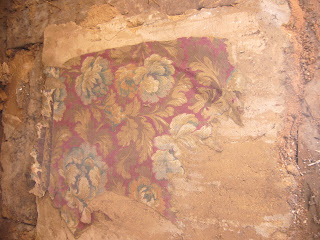 Unfortunately, Valparaiso is infested with the little fcukers and at a conservative guess i'd say that 90% of the houses on Cerros Alegre and Concepcion (ie the part designated UNESCO World Heritage Site) are in as bad or much worse condition than ours. The problem is that although construction is very cheap by english standards, it's still expensive by Chilean standards and most house owners simply can't afford to repair the damage. The other problem is that the last major earthquake in Chile was 1985, an earthquake that brought down houses and sent coffins from the cemetary sliding down the hills like sledges. The termite plague arrived after 1985 so you can only imagine the carnage that will be caused by the next big one. And big ones come every 20-30 years in Chile, so it's on its way.

Now you might be wondering why the hell we would have bought a death trap sited directly above one of the world's most active faultlines. This is why-click on the photo and you'll see we have views of not just the Pacific but the Andes in the same frame, the house facing north east. On good days we can see Aconcagua and possibly in the distance...New Zealand? 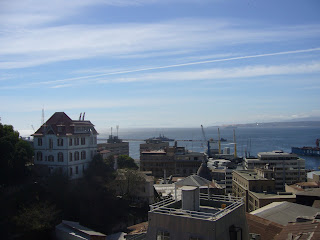 So what's to be done? In our case, we're going to basically build and entire new metal structure to replace the original wooden one. This involves stripping the house nude-leaving just the wood on show- taking out all the original adobe/mud. Once the structure's in place we can get on with the original project we had in mind-namely, turn an old Victorian house into something new and livable whilst maintaining the original style and mood. We've done it before so we know what we're in for: 6-9 months of fun and frolics. Oh, and stress, almost certainly tears (from the girlf-i'm a boy and boys don't cry), depression, arguments and possibly murder. But at the end: smiles all around. I'll keep you updated as things progress.
Posted by Matt at 13:51