The builders aren't going to start breaking my house today. That joy will have to wait 'til Saturday. In the meantime, i've got another restaurant review for you lucky people.

We went to Samsara after a comment was left the other day mentioning Thai food and i got the urge to eat some. There's one just around the corner from us that i'd noticed a few times so i thought we should give it a go. The restaurant is in a beautifully restored house on Alte Montt 427, Cerro Alegre. However, I should have known something was up when i saw that they'd left a couple of the wooden supports in their 'original' state (ie before renovations, covered in crap and dirty). This kind of bollocks that says to me that the owner and/or the designer is up his own arse and just wants to show off about how nice the rest of it looks. 'Oh look at that old beam, what a wonderful job we did.' I don't like that kind of thing. If you're going to do something well, finish the bloody job, don't leave a couple of pieces of wood looking like shite. Just my opinion.

Anyway, unfortunately my stomach was playing up a bit so i couldn't order the Green Curry, which i use to benchmark every Thai restaurant i go to so i had to try something else. Perusing the menu, i realised that we're a bit spoilt for Thai food in England and pretty much any other 'western' country. Thai food is cheap and usually well prepared. Here, it's expensive (in local terms). The deal at Samsara is that you get a main course, salad and pudding for between 9000 and 14000 pesos (us$18-28). That's a fair bit of wedge for Chile, particularly if you don't like the puddings on offer. Anyway, I chose the stir fried beef in sweet chili sauce and the girlf had some sort of coconot milk soup with a prawn (yes, one) and a couple of bits of chicken. for dessert, we both had the chocolate cake which was really rather nice. Light and fluffy. 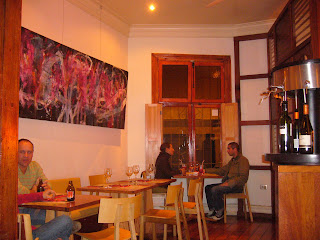 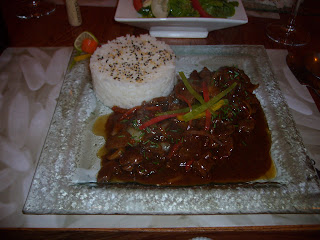 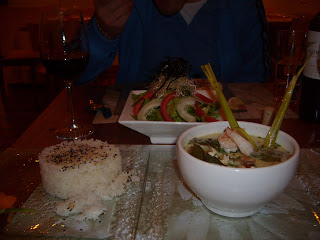 Now i have to say that the food was actually quite good but it didn't really resemble any kind of thai food i've eaten in: Thailand, London, Paris or Sydney. It didn't even resemble the Thai food i ate in Knowle, that well known gastonomic hell..sorry, centre...down the road from Solihull. And if you're going to spend the extra money to go and eat 'exotic' food, you want to eat something that bears at least a vague resemblance to what it's supposed to.

We arrived at 9pm to eat and there were a couple of people already there. Our food was served reasonably quickly and the waitresses were doing a fine job. That was until 10pm when the place started to fill up. And when i say fill up, i mean that there were a whole 25 people there-the place is small. However, the waitresses (4 of them) couldn't cope. Not only that but the kitchen was a disaster. A couple sat next to us at 10pm and their food arrived at 10.50, just as we were leaving. That's 50 minutes waiting with only a couple of dry biscuits to keep you company. We'd have left at 10.30 had it not taken over 15 minutes for the bill to arrive. Shoddy work.

Anyway, i wouldn't recommend this restaurant due to the fact that the service is so slow and because the food served isn't Thai (something I insist on in a Thai restaurant). I doubt i'll be going back to try my green curry. If you still fancy it, the website is here:

http://www.samsararestaurante.cl
Posted by Matt at 14:53

It's a great restaurant and a staple of Cerro Alegre. A green curry, a bottle of San Martino and a your polola. This is Valpo. Domino tomorrow