The greatest day of my life...Immigration fun

Yesterday i had the thrilling task of going to immigration. Back in February, i sent in my application and i received the 'visa en tramite' (visa in process of being 100% approved) within a month (that's not normal, it can take up to 3 months sometimes). However, on receiving the paper, i noticed that i'd been given a 10 month visa. In order to import my stuff my Argentina without having to pay duty, i need a visa for 12 months (all my things are already here and i've got up to a year to process them formally). So i got in touch with the people at immigration and asked why i'd only been given 10 months. The answer? By mistake. But because everything had been put into the system and the paper had been stamped, there was no simple switcheroo-i had to re-apply. Almost 3 months later i'm still waiting for news.

So i decided that enough was enough and it was time to pay a visit to immigration. For various reasons, it was more convenient for me to process the original visa in Santiago-this means that i had to go to Santiago to ask what the hold up was. Extranjeria in Santiago is hell. You have to get there early-it opens at 8.30 but you need to be there by 8 at the latest. After setting off at 6.15am from Renaca, that's the time i arrived. And i arrived to this: 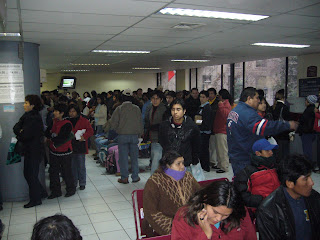 I had to wait in line to get a number (55). Then i left and went for breakfast-for some reason, no one else there thought of this brilliant idea. I returned 45 minutes later and within 15 minutes i was at the desk. If you end up in immigration, allow for 30 numbers every half hour to be sure you don't miss your turn. Apparently, there's no problem with my visa and it should be processed within a couple of weeks. A bit of a wasted trip. But at least i got to see a scuffle in the queue when a couple of Bolivians tried to push in front of some Peruvians. Security was called. Most entertaining. Nothing major, just some pushing and typical South American racial insults.

Anyway, i got back yesterday evening and we had a really nice sunset. So here's another pretty picture for you. 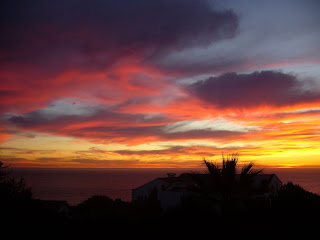 My name is Susan and I love your site. I have found it extremely interesting and useful.

I am moving to Valpo March of 2008 on a scholarship to attend La Catolica for 2 semesters. I saw that you are a real estate consultant and at this moment I am trying to figure out where in Valpo/Vina would be a good place to rent an apartment. I have $1,000USD a month to budget for rent and food. Any ideas as to neighborhoods or places I can look to find apartments? Any suggestions would be great appreciated!! I look forward to your response.

thanks for your comments...

as for apartment rentals, i really don't know very much. rentals seem to be around us$250-500 a month for 1 or 2 bedroom places in Valpo, possibly a little more in Vina. this is unfurnished (which in chile usually means no cooker, no light bulbs...nada). Furnished places cost more, obviously, but you don't have spend money on what you need to live.

have a look at http://www.portalinmobiliaria.com/ it'll give you a decent idea of what you might find. everything is valued in UF. One UF is around us$36, so 10UF a month means us$360/month.

if you have any other questions just let me know.

Thank you so much for that website. It helped quite a bit. I really appreciate it. Have a great day!!

I also looked up your real estate consultation firm, it sounds quite interesting. My two majors are international business and spanish so it's always interesting to me to see people actually working internationally.

Hola Im Xime i study at the Catolica here in Valpo and i work in a youth hostel called el yoyo. I was surfing and I found your website. I wanna say that with 1000 usd your are gonna be rich here. You can hire an flat for yourself with 500 usd. A room should cost 200 usd and it is expensive. If you have doubts i will be glad to help you whoever you are. Sorry i didnt have much time to read your site. Im in class now!! write to missanemix@hotmail.com Saludos!!!!!!!!!

so who is moving?? Susan? Ok Sorry im in a hurry. Matt? who are you?

jeje, you are a little confused! Matt, as in me, is the writer of this blog and Susan is the person looking for info about Valpo...anyway, i have my doubts as to whether susan'll come back to read this post but if she does...Susan, write to Ximena as she wants to help you.

Ximena, thanks for stopping by and offering to help a complete stranger!