We finally made it to the Museo Naval y Maritimo here in Valpo. This afternoon we're heading to the Lord Cochrane Museum. School holidays plus little sister means excuse to do all the touristy things we want to do but don't normally have time for...

So the Museum is a shrine to Chile's naval history. If you remember my post from a couple of months ago, it was Lord Cochrane who set up the Chilean Navy and helped build it into a South American power. Cochrane gets 2 large room sjust to himself, describing his achievements in Chile, particularly his taking of Valdivia. This is recreated with a crappy, but huge, model with LEDs to light up the different forts he took on his way to setting up the liberation of Chile from the Spanish. There are copies of letters he sent to various other big South American historical figures such as Bernardo O'Higgens and Jose de San Martin. Quite good stuff.

There's a lot of tub-thumping in the museum, slightly OTT and embarrassing and overly nationalistic at times, but if you ignore that side of things, the museum is really quite interesting.

Other exhibits include an entire wing of the building for Chilean Uber-hero, Arturo Prat. I've said it before, but i just can't understand why this guy is such a hero. Not only did he martyr himself and his entire crew, he did it for absolutely no gain whatsoever. In fact, the Chilean Navy lost a high ranking officer and one of its best ships because Prat thought it a great idea to attack a Peruvian ship far more powerful than his. In most countries, this kind of stupidity would result in a posthumous court-martial. In Chile it results in almost saint like status. Prat's wing has huge, beautifully crafted scale models of the two ships involved in the battle, the Huascar and the Esmeralda (Prat's ship)

There's also a room dedicated to fascist general Merino Benitez (he also gets a statue out front). Merino Castro was one of the original coup plotters along with Pinochet and worked in the Economic Ministry during the dictatorship. There's a copy of an unapologetic open letter he wrote saying that the coup wasn't a coup and that the dictatorship wasn't a dictatorship. Try telling that to the 3 thousand murdered, 30,000 tortured and millions of terrified Chileans who lived and died through a 17 year 'non-dictatorship'.

Still, for 500 pesos, the museum's worth a visit. It's at the top of Ascensor Artilleria on Cerro Artilleria. 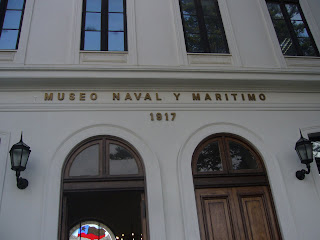 The big 3: O'Higgins, Prat and Cochrane 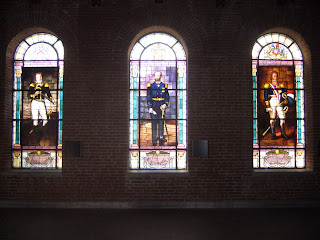 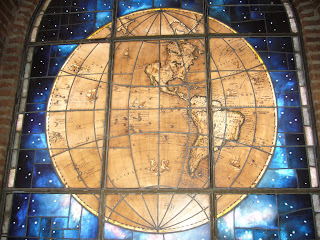 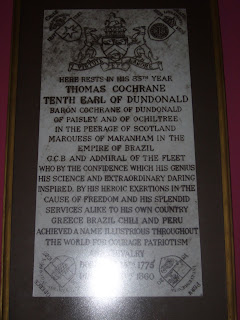 The Shrine to Arturo Prat 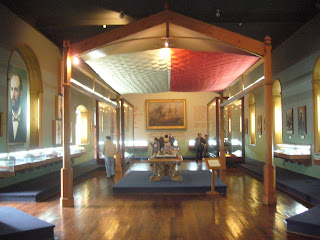