There hasn't really been much interesting to report on the renovations in the last 2-3 weeks. It's all moving along, the house is a mess etc. We did find live termites on the ground floor which was a bit of a surprise and has led to a bigger job on that floor than we were expecting, but apart from that...the structure is being strengthened, new beams, diagonals and struts and the insulation for the ground floor are being put in and the cost of it all is rising. And fast.

One part of the ground floor is actually underground and built out of huge rocks, with bricks on top. It was covered up with dry-wall before but we knew it was there. The question was what we were going to do with it. As it's slightly underground, there's obviously a damp issue but the dry wall was stealing about 25cm from an already small-ish room. So what we've decided to do is to polish the rocks and also the bricks on top and add a small ventilation fan to the room so it doesn't get musty. We've seen it in other houses and hotels here in Valpo and it looks really cool (where we've seen it, they forgot to put ventilation in so it smells of damp. Duh.)

This is what it looks like at the moment. Once it's cleaned up, i'll post more photos. 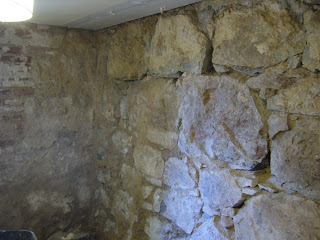 This photo is of the insulating material we're putting in. During a previous remodelling, the owner took out all the adobe and then simply left the gap between the dry-wall and the corrugated iron exterior empty. This would explain our horrifying heating bill. Also in the 2nd photo you can see the new termite-proof pine timber that's replacing the termite damaged oak. The lighter colour beams are pine and the darker ones are the original oak (that are undamaged). 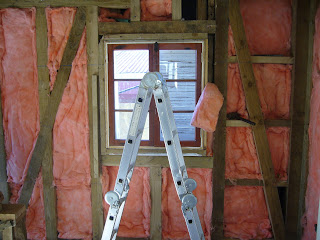 And that's your lot. Hopefully in the next 10-14 days i'll have something more interesting to report.
Posted by Matt at 17:04