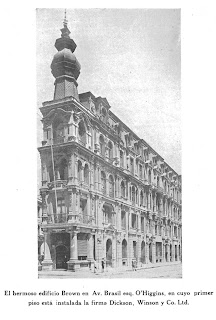 A little while ago, i made an attempt to do a 'before and after' post showing buildings from photos from around 1925 and comparing them to what they look like now. It wasn't all that successful as many buildings have been demolished or collapsed during the 1985 earthquake and street names have been changed over the years.

One building that i was desperate to find was the Brown building. It's pictured above.

Now, as you can see, it's a hideously ugly monstrosity. Can you believe that someone paid an architect to build it? Horrible.

Thankfully, during the 1970s, the local council decided that enough was enough and tore the ugly beast down. Pinochet-era architects then managed to skilfully blend a new building into the late 19th/early 20th century architecture typical of Valpo. The result was a modern marvel. An architectural joy. My favourite building in Valpo. Ladies and Gentlemen, i give you...La Intendencia de Valparaiso! Ta-dah! 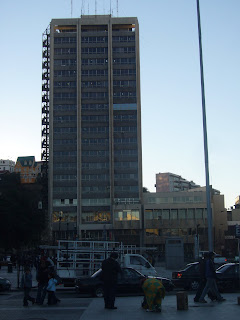 Ha! and you haven't seen the "Congreso Nacional"....it's even a greater....pile of crap!
Those bloody architects...

You know...and it shames me to say it...but the Congreso is actually starting to interest me. I mean, it's just so monumentally hideous that i'm starting to find it charming in its awfulness. There. I've said it. I'm starting to like the Congreso Nacional. Feel free to beat me with a large stick.