I've been lazy recently and haven't been doing anything useful towards this blog but hopefully next week i'll have a bit blogenergy. In the meantime, here's a quick post about money in Chile.

If you're American then it's not too hard either. As the Dollar is a complete waste of space at the moment-two to the pound-it's easy to work out. 1000 pesos is roughly us$2. $1=525 pesos.

If you're from Eurolandia then it's somewhere inbetween the two. Work it out for yourselves.

One thing to note if you're a first time visitor is that the sign for the Peso is the same as the Dollar sign-$. So don't be alarmed when you see a bottle of water priced at $350. It's not special anti-ageing, life affirming water. It's normal 35p/70c water.

The local slang for money is the universal Spanish slang-'Plata'. Also, here in Chile you'll often hear the word "Lucas" which means 'thousand'. So "diez lucas" means 10 thousand. Of course you'll only actually hear "diez luca" as Chileans are in the habit of swallowing any 'S' that comes their way-but that's a completely different topic.

So below are photos of the various notes and coins in common use, with the exception of the elusive $20,000 note which is about as common as a good England quarter-final performance. It's green and a bit bigger than the others and if you see one please report the sighting immediately to the Forgers' Union of Chile. 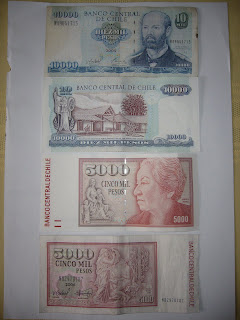 So, the first note you see is the $10,000. The bloke on the note is our old friend Arthur Prat and on the back is where he grew up. The second note is another old friend from our trip to the Elqui Valley, Gabriela Mistral. On the back is something to do with her Nobel prize for Poetry that she won in 1945. 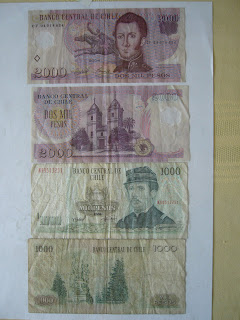 Next up, we have the $2000 note. $2000s are those new fancy notes made out of waterproof and unrippable plastic. Once, whilst less than sober, i tried to prove this fact to someone who wasn't convinced about it's waterproof-ness and unrippability. End result? I ripped the thing in two and then, in shock at it's obvious rippability, dropped it into my beer where it was further ruined-the plastic just covers up a paper interior. Bugger. The geezer on the note is Manuel Rodriguez (no idea) and some churchy place on the backside.

The other note is the $1000 note and has the face of Ignacio Carrera Pinto (again, no frigging idea) and the other side has a picture of a monument to Chile's "Heros". $1000 are almost always in rubbish condition. 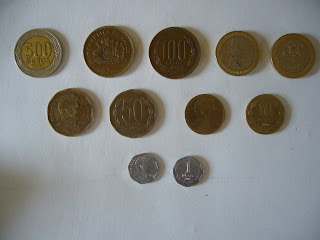 Finally, we move on to the coins. First is the $500 coin (i could only find one-the heads side is some religious bloke). The next coin is the $100 coin which has the Chilean crest on the head side. The next coin is the $100 coin. Yes, another one. This coin was introduced specifically to confuse Argentine visitors as it's the same size, weight and design as the $1 in Argentina. It's got a picture of a Mapuche woman on the head side. Sturdy folk, the Mapuches. Next comes the $50. This coin has the profile of Chile's beloved Liberator, Bernard O'Higgins on the heads side. Moving on, we have the $10 coin which also has a profile of Bernie on and then finally, possibly the most useless coin in the whole wide world: The $1 coin. That's the equivalent of 0.1p or 0.2c. Pointless. And made out of tin-foil. Also with Bernard on it.
Posted by Matt at 10:28

thanks karl. i'd say the same about yours...but unfortunately i don't speak german...