Today, the 21st May is the Chilean Navy's most important day. The date celebrates the supposedly heroic actions of our old friend Arthur Prat. Against impossible odds the obvious happened. Arthur died along with everyone else on his ship. I quite honestly cannot work out why the hell they made a hero out of a guy that lead his entire crew to their deaths. He should have been posthumously court-martialled and his crew's families compensated for their completely pointless deaths...His name is rather apt: A Prat. The girlf prefers Condell . She's not alone among Chileans in thinking that Prat gets more credit than he deserves.

Anyway, the date is marked by a big naval parade here in the Plaza Sotomayor and a presidential speech down the road in Congress.. It's quite an important event. Here are some photos. 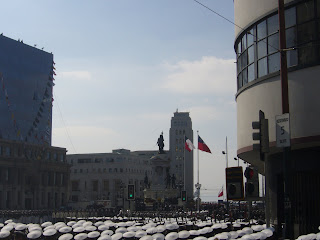 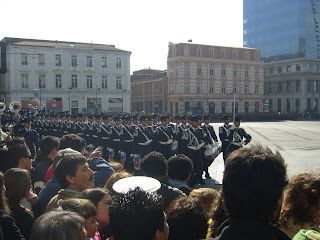 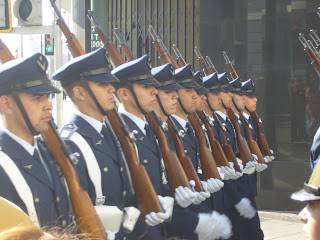 The police look on, clearly jealous of the Navy Cadets' shiny blue uniforms. 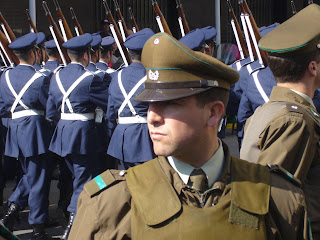 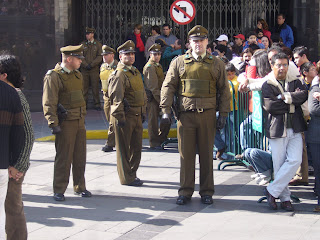 And although they've got nothing to do with the armed forces, Los Caribineros de Chile also got to parade. In these photos you can see both Caribineros and Caribineras-the guys got to march with rifles. Obviously, women can't be trusted with big guns... 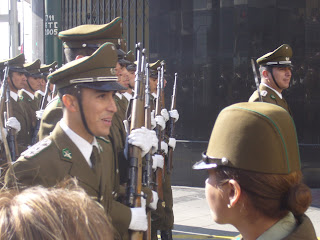 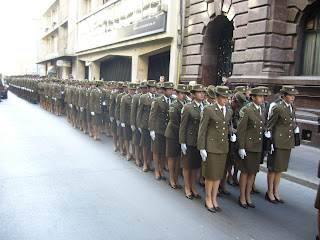 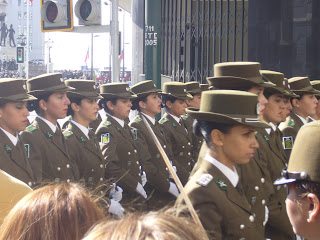 For some reason that i couldn't fathom, the Chilean equivalent of the cowboy or gaucho-el huaso- also got all dressed up and took a stroll with the Navy and the Pacos. 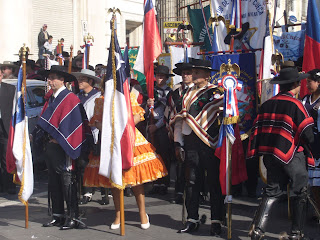 After the parade we went to have lunch in a little hole in the wall tapas bar that we've walked past dozens of times. It's called Urriola 383. The address is Urriola 383. It's quite a cool place-the food was good but not spectacular. We had Papas Bravas, bruschettas of capresse (tomato, goats cheese and basil) and also spanish chorizo along with a carnitas asadas-thin strips of beef. It ended up costing 11,000 pesos (us$20) including a couple of soft drinks, which i thought a bit pricey for what we got. Still, the atmosphere was nice so we'll probably go back at some point and try some of the other stuff on the menu. If you go, make sure the owner's daughter isn't around-she pushed me out of my seat and started eating our food... 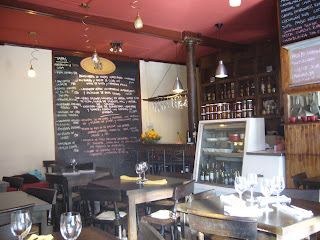 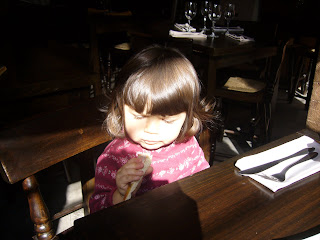 That is kind of freaky... the women's uniforms, I mean. They look like they were copied from US WW2 designs. You may not be familiar with a tv show called "Wonder Woman" from the late 1970s, but check out pics of Lynda Carter as Wonder Woman's alter ego, Diana Prince. The resemblance is spooky.

Supposedly we're going to have a military display of some sort on May 25th. I don't think they've had a major display since the dictatorship fell (with good reason). I'm eager to see it, but a friend of mine said that if I go it will appear that I support the military. Wouldn't want that.

wear a hat and put a fake beard on...

i forgot to add to the part where the women weren't carrying rifles like their male counterparts-motorcycle police in chile ride either rock-star harley type bikes or cool off road trail bikes...women motorcycle police get given...a tiny 50cc moped. Not quite as cool.

nice to see it resulted in something, all that senseless drum banging disguised as "practice" I had to endure when I visited Valpo last weekend. Although on the plus side we got spared a totally mula Mapuche story telling because of the noise.

Jealous you get to live in Valpo, I'll probably email you about the apartment sitch someday soon.

robert-not vespas but those cheap 50cc mopeds. they sell them in the supermarket over here...

chileno-no idea what an apartment sitch is but feel free to email me. and yeah, all that banging got on my nerves last weekend as well-we thought at first that the sailors just loved their mummies very much as it as mother's day. then we realised it was the day of the prat coming up.

Seeing from your profile that you are a budding real estate entrepreneur, I have something that you might help me out with. I looked to email you, but can't find your email address anywhere on your blog. So check it out, I have it advertised on Mercado Libre and see if you are interested in taking it on. http://articulo.mercadolibre.cl/MLC-6598364-_JM
If you want to email me its ped_gunn AT hotmail DOT com
Cheers
Pedro