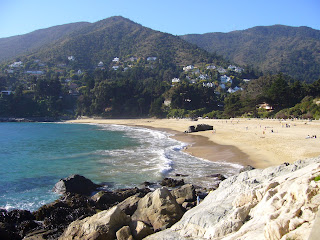 I've blogged about Zapallar a couple of times before. It's Chile's prettiest beach town, the country's Hamptons with multi-million dollar mansions dotting the hills and overlooking a beautiful little bay.

The town also has my favourite restaurant in Chile-El Chiringuito, one of the best sea-food places you'll find anywhere in Chile and, despite it's location, really decent value (it's no more expensive than a couple of grotty places I've been to in Algorrobo, for example). The reineta al ajillo con ensalada chilena y papas fritas will leave you drooling for more.

So, as it was Lore's birthday yesterday, we headed up for a bite to eat. Halfway through lunch, we were accosted by a Chilean lady who had picked up a couple of Aussie hitchhikers and invited them for a bite to eat. She didn't speak any English and they didn't speak Spanish-it didn't stop her talking though...she resembled Mr Happy. On Prozac. As soon as she found out it was Lore's birthday she informed the staff.

And then this happened:


Yes, that' s a stuffed otter and penguin. Still, we got a free pudding :)

And we also got to see a friendly little dolphin who decided to come and play in the harbour.

I've said this before-if you're in the area, then a day trip up to Zapallar with lunch at El Chiringuito is something you really must do.
Posted by Matt at 17:29

Exciting, I am really very lucky to find this article. Do you have any one else in this topic ? I sent to my friend, let them together to enjoy this style of writing. Thank you for sharing