The Arco Britanico was a gift to the city of Valparaiso from the colectividad britanica. It was built in 1910-11 to celebrate 100 years of Chilean independence. The structure is covered in white marble and there are four friezes, one on each column of British 'heroes': O'Higgins, Cochrane, Simpson and O'Brian. We already know about Cochrane and O'Higgins (Chile's liberator). Simpson was another British Naval Officer/mercenary who was around at the same time as Cochrane (surprise, surprise-they didn't get along). Here he is:

I can't find anything out at all about O'Brian. I assume he was another naval guy who fought alongside the other three.

Anyway, here's the arch from sometime around 1925 and then from sometime last year. The photos are taken from different sides, by the way-the recent one looking east towards Viña and the older one towards the city centre. 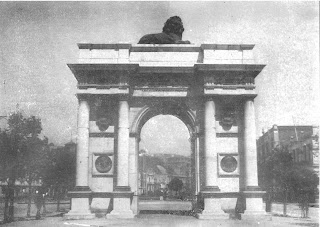 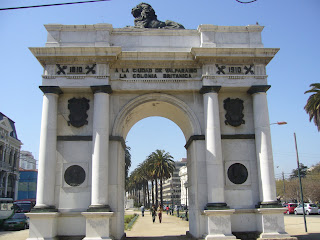 Always amazes me how little information the British have of their past influence in parts of Chile.

Most People here sadly couldnt even place it on a map, yet every chileano I chat to online seems to speak very highly of the British.

el zorillo...i agree that we don't have much interest in chile but, let's be honest, we ruled pretty much 2/3s of the world and chile was never more than an economic colony, not part of the Empire. Chile was never going to be more than a footnote in most British history books. South America is understandably automatically seen as 'Spanish' history and not British, despite the reality of what actually happened.

Santiago-thanks for those links, i'm going to start to have a look through them over the next few days.