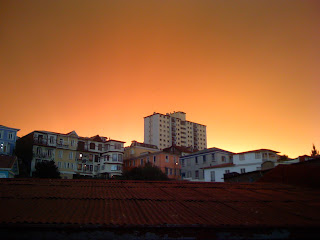 On Monday evening, the smoke in Valparaiso was pretty awful. The air was thick with the smell of it and it was actually hard to breathe. I had a terrible headache. It was like being in Santiago in June.

Tuesday and Wednesday were much better. So much so that I didn't check the news to see the status of the fire. But yesterday evening, the smoke was back and there was a blizzard of ash. The whole city is now covered in a grey-black dust.

The fire was intentionally set. Two separate fires were started at the same time, which obviously suggests more than one complete and utter twat involved. I really don't understand why people do such stupid stuff.

Around 3600 hectares of forest have now been burnt, spewing smoke into the atmosphere. Homes in Laguna Verde have been evacuated and at least one death has been reported amongst the elderly due to respiratory problems. Perhaps the culprits should be tried for murder?

Anyway, one upside of the smoke yesterday was that, close to sunset, Valparaiso was quite literally glowing. Pretty spectacular. 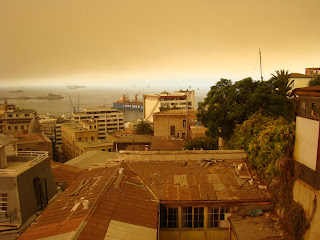 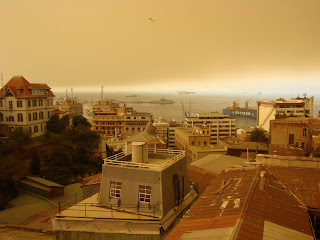 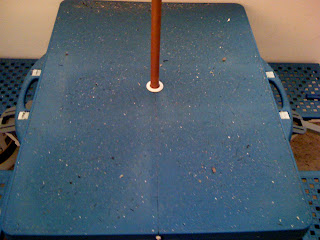 Eerie....these photos remind me of the massive bushfires we had here in South-Eastern Australia a few years ago. That orange tinge in the sky and the thick cloud of smoke is just surreal. I hope they catch and throttle the dickheads responsible!

in spite of the fact it's burning a whole area, I like the colour of the pictures...

yeah, the orange colour was pretty cool, the late afternoon sun through the smoke gave the city this kind of warm glow. It's all over now, although the thick cloud today is worse than the smoke ever was. Autumn is definitely here now.