On the way down to the bank a few minutes ago, I came across this bit of stencil art. I don't think it's new but for some reason I've stepped over it dozens of times in the last year or so (it's on the floor in Pasaje Galvez/Fischer).

It reads: 'Don't let them murder us this May 21st' 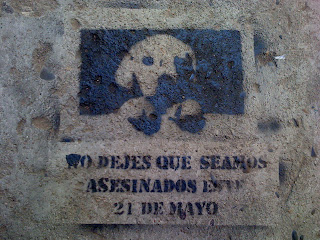 What it refers to is that every 21st May, the Navy has a big parade and all the dogs get cleared off the street. Many people reckon they get put down and protest (the people, of course-the dogs don't seem to know what's going on)...but I know the truth...An English friend who is, unfortunately, no longer living out here in Valparaiso was going out with a girl whose father would go around and collect all the dogs, lock them in his back yard (with the other 4 million stinking mutts he has collected over the years-the neighbours don't like him all that much) and then, once the parade is over, release them back onto the streets. My friend couldn't help but follow his puppy-loving girlfriend and was cajoled into joining in the 'fun'.

It'd be better to liquidate them if you ask me. And I love dogs.

Of course, now the council can lock all the dogs in the new pound they built. But hey...hang on...they built the pound before counting how many dogs there were and there's not enough room. Now that's good planning.
Posted by Matt at 16:37

"Mierda de perro no es cultura." I used to walk around Valpo saying that at odd times, like standing at the corner waiting for the light to change. Used to get some funny looks, can't imagine why :-)

Give me an AK-47 and directions to that guy's backyard and I'll boost property values in Valpo by 500%.

Anonymous:If it were, Valparaiso would be the second culture capital of the world behind only, of course, Buenos Aires...

Chileno-his daughter knows where I live so i don't think it's a wise idea.

again you and your anti-dog comments!

I'm sorry, but it has been like that for ages and I'm afraid is not going to change ...

Hey, I love dogs but I don't think it's fair to either residents or visitors to have to contend with filthy, disease-ridden, intimidating and sometimes vicious stray dogs that spread fleas, ticks and other nasty little insects around town. I also don't think it's fair on most of the dogs as they're mostly starving, many have mange or other diseases and all have to eke out a pathetic existence by fighting amongst themselves. They are a public health hazard and cause traffic accidents. No one looks after them if they get injured.

It's an unfortunate part of life here that Chileans have not the faintest idea as to how to care for a dog as a pet. To most (not all) Chileans, having a dog means either locking it up in the back yard and never, ever taking it out for a walk or even letting it in the house (what's the frigging point of having a pet like this?????) or leaving it out on the street and giving it a bit of food now and again. No vaccines, no neutering, nothing done in the animal's best interest. It's cruel. And it's better for pretty much everyone for these dogs to be taken off the street and sent to doggy heaven where they'd be much happier.