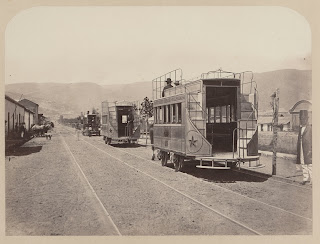 Valparaiso was the third city in South America to have a functioning tramway (or urban railway as it was originally called in Spanish), after Rio de Janeiro and Santiago.

The first line opened in March of 1863 with carriages imported from the USA. The first section of track ran between Baron Dock and Customs House in a loop that included Avenida Argentina, Calles Victoria, Montt, Donoso, O'Higgens, Esmeralda and Cochrane and returning via Serrano, Prat, Condell and Independencia. The carriages that ran along this route are likely to have been the first double deckers in the world.

By 1880, the Ferrocarril Urbano Valparaiso (FUV) had extended its network to include most of the downtown area and had 63 carriages in operation.

By the end of the century, another 2 companies had joined in the fun, extending the network all the way from Playa Ancha to Viña de Mar. The total distance from one end of the network to the other was around 20km and 75 trams ran along the tracks.

All the trams in Valparaiso were horse drawn until 1903... 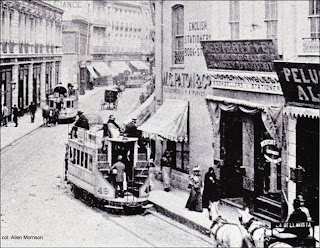 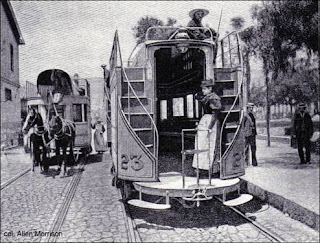 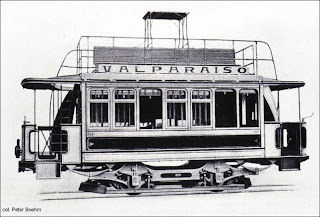 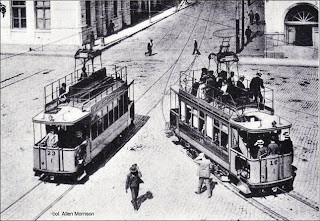 The service opened on December 25th 1904 and used electricity from the new electric plant in Laguna Verde, 20km along the coast from Valparaiso.

The 1906 earthquake fortunately didn't damage very much of the network and shortly afterwards it was extended up to Playa Ancha and back around to Cerro Artilleria. By the end of 1907, the entire network had been electrified and the last horse drawn carriages were retired from service. It was then further extended up to Cerro Baron and Cerro Panteon, Santa Elena, Barrio O'Higgens, Las Zorras, Calles Tomas Ramos y Yerbas Buenas. The trams connected various upper-stations of the city's funicular lifts, creating an integrated public transport system that Valparaiso could really do with today. 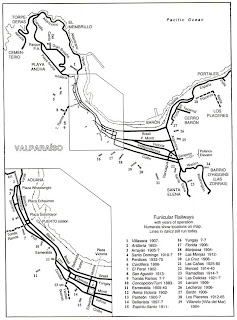 The stop outside the cemeteries. 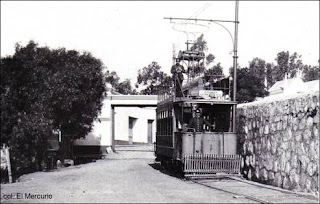 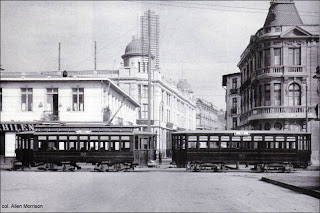 In 1910, however, and for reasons unknown, the company decided not to invest in any more carriages or to extend the network further. The company let the carriages and tracks fall into ruin, systematically reducing its size and increasing ticket prices (rather like what has happened to the British rail network after privatisation). After a series of accidents, the council started limiting the number of passengers allowed on the trams and waiting at the rapidly deteriorating platforms, sparking public fury.

In 1920, after massive public, government and press pressure, the company finally renovated some of the carriages and platforms...but it was too little, too late. In March, a passenger was asked to leave a carriage by a ticket inspector. The passenger freaked out, threw a rock through the windscreen of the carriage and set in motion a massive riot that left 56 carriages burned, 21 of them beyond repair.

After these riots, the German company sold out to a Spanish consortium that was actually under the control of a Belgian company, SOFINA. Within a couple of years, the new controllers had repaired the damaged carriages, bought new ones and further extended the network. In 1923, the company was sold again, this time to British investors. New carriages had already been ordered from Belgian and were immediately put into service. 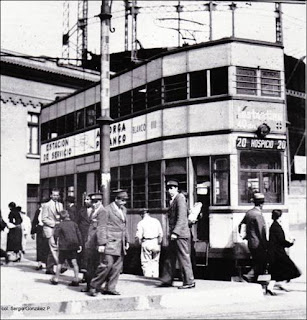 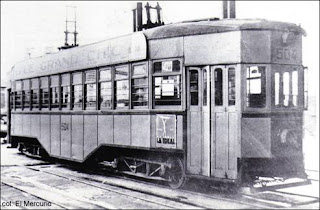 In 1930, the tram network reached its heyday, with 144 carriages and 60 km of tracks from Valparaiso to Vina and up into the hills.

The US company was expropriated by the state in 1945 and then systematically run into the ground by the incompetent new 'owners'. By 1950, the network consisted of two short routes that mirrored the first ever lines opened almost 90 years earlier. On the 30 December 1952, the last ever tram journey was made and the day afterwards, 32 Pullman Troles entered into service. They're still running today. Just. 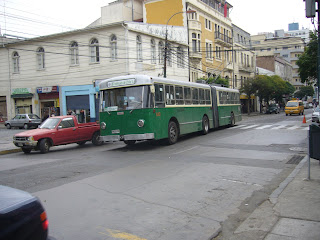 Now the Troles, are great...but I'd much rather have a dedicated tram service around Valparaiso. They're just so much more...romantic and olde worlde. I like that. The Troles would be better if they were the only public transport allowed through the city centre. Banning the 4543454663240 buses that careen down the narrow city streets would be a blessing to anyone who has to spend more than 17 seconds downtown. There was an attempt to do this last year but the council cowardly backed out after complaints from shop owners, saying that business would drop if the buses weren't allowed through. I, personally, doubt this but the shopkeepers won and the Troles were almost lost forever before the government stepped in with a rescue plan (the plan was devised, in part, to make the Troles venture economically viable by allowing them a monopoly on public transport along a couple of main streets).

For a more detailed history of the trams in Chile and for more photos, visit Tranvias de Chile (in Spanish).

And for an immense amount of information regarding trams and trains from pretty much all over South America and to buy books regarding this subject, go visit this page here. If you're a tram lover, you won't be disappointed.
Posted by Matt at 11:08

Great photos. Hey Matt your mac email address is kaput I'm trying to email you please give me an alternate address I can use. Thanks buddy!

Trams in Valparaiso again? I like the sound of that! Would be like having a slice of Melbourne in my 'ciudad natal'...can't see the portenos adopting the 'hook turn' at T-intersections though! I knew that Playa Ancha had trams running along Gran Bretana but never knew that it linked to such an extensive network....well done on the research!

The trams would be a nice romantic touch but given the narrowness of the roads in el plan, the increasing amount of traffic and the large amount of micros and colectivos, re-introducing them would be chaotic without the implementation of sound transport planning principles...mind you, the trolleys don't seem to hold up traffic half as much as the fifteen or so micros pulling in and out of any given paradero.

I'd love to see trams back but it won't happen. I'd be happy just to see Cochrane/Prat from the Plaza Sotomayor, Esmeralda to Plaza Victoria (semi) pedestrianised with the troles being the only public transport allowed through but that will never happen either!

Public transport and town planning are not Chilean strong points.

It's a real shame the entire tram network was allowed to die off, even if it was 56 years ago. The idea of having an integrated tram/funicular system is really cool and not something i'd ever have thought possible before.

....Its interesting to see what an integrated public transport system can do for a city. With the loss of the tranvias, I'm amazed that the funiculars have lasted as long as they have - its obvious that the long queue of tourists outside certain acensores is what is sustaining them. Do you know if the ones that are currently closed (Baron and Villa Seca come to mind) will ever re-open?

Planning may not be a Chilean strong point but I live in hope that some day it will be :) Apart from the incomprehencible bus routes in cities like Valpo and the chaos caused by Transantiago I find the public transport system in Chile to be pretty good - extensive, generally efficient and reliable...a stark contrast to the CRAP public transport system here in Melbourne!

A tourist tram in the centre of Valpo could be pretty cool...

Trams would be very nice in Valparaiso. Nice photo though of the green electrical bus. I have probably used it when I was young in Geneva where it comes from. They were bought some years ago second hand from there... They used to be organge in Geneva at that time...
JCMoriaud, France (border to Geneva, Switzerland)

JCMoriaud, I didn't know the troles were from Geneva. The original ones were imported from the US and I know there's at least one of those still running. I guess the replacements came from Switzerland then?

Patricio, well i guess the public transport system in chile is pretty decent but i base that judgement only on the fact that there are buses pretty much every 3-4 minutes. In England a 30-60 minute wait outside of any city centre is pretty common. The transport planning is rubbish here though-they could actually probably get half the buses off the road and still have a decent system. The transanfiasco tried this but was awfully implemented. With a bit more thought and planning, it could happen. It won't though, of course!

The ascensores are Monumentos Nacionales and so cannot be touched, even the ones that are stopped. MN doesn't actually give any funding to anything whatsoever, it just means the owners can't tear down whatever was called a MN. This is why so many MNs 'mysteriously' burn down-the owner can't sell the building or whatever and the only way of getting money is through insurance scams. La Ratonera a prime example-alledgedly.

So there are currently 15 (i think) ascensores still running, some private and some owned by the council. The private ones all cost more. The fact is, it's not profitable to run an ascensor and the private owners needs more help financially to keep them open, otherwise we'll have a repeat of the 500 peso ticket Ascensor Turri/Concepcion was charging last year until a boycott reduced it back to 250.

I doubt very much the ones that have closed will ever re-open. They'll just be left to rot, as so many Monumentos Nacionales are.