This is part of a group blogging thingy and nothing to do with Valpo at all (it's also a repeat of the post I wrote over on my Santa Cruz, Chile blog Colchaguino.
I've experienced quite a few awful journeys back in the day when lugging a 25 kilo rucksack around in 90 degree heat seemed appealing. But I'll just stick to just the one.
The last really bad trip was in Bolivia. The journey was La Paz to Uyuni, where I would be doing the Salar de Uyuni tour (and as an aside, the Salar and the Altiplano lakes are the most spectacular natural wonders I have ever seen in my life and stomp all over anything Chile has in the north).
The trip started with a taxi driver who, despite my insistence I was late for the bus (I wasn't), insisted on taking me on an unwanted and undiscussed tour of most of La Paz. With the meter running, of course. This, despite the fact that the bus station was 8 blocks from where I hailed the taxi and I knew where we were supposed to be going. All my bags were in the boot of the car so I didn't have much choice in the matter, unfortunately.
Upon arriving at the bus station, I found out that the bus was delayed. By 7 hours. And no, there weren't any other buses leaving in that time. After wasting time by buying an 11 year out of date magazine and eating typical Bolivian gruel, the bus finally arrived. I got on the bus, expecting to be sitting near the front with all the other foreigners (they usually put travellers at the front). Instead, I was one row from the back, directly over the wheel arch, with about 3 inches of leg space and surrounded by friendly but extremely smelly locals who believed that chewing coca leaving and spitting on the floor was the height of sophistication.
The first 2 hours of the trip were then fairly uneventful. I got used to the constant staring from everyone around me. Perhaps the 20mg of Valium I'd bought over the counter at a local pharmacy helped. After 2 hours, the paved road gave way to one of the worst and bumpiest dirt tracks I've ever experienced. This on a 40 seater bus (it had at least 60 people on) with dodgy brakes and completely shot suspension. And remember, I was sitting over the wheel arch.
By this time, the aforementioned Valium had really kicked in. Even with the Valium I failed to sleep. I sat there for the next 12 hours unable to move, my muscles and brain feeling like they were melting. It was like being in a rather unpleasant dream. I don't actually remember all that many details, but one that sticks in my mind, despite the the Valium brain fog, was driving over one particularly deep ditch which resulted in the 5 foot tall Bolivian man sitting next to me being catapulted upwards and smashing his head against the overhead luggage compartment.
Upon finally arriving in Uyuni after 14 hours, my back was killing me, I'd had no sleep and my brain was still foggy from the Valium. It was about 2 degrees centigrade. Not only that, but I happened to arrive on a day when the town celebrates some saint by having a water fight. We were met off the bus by a bunch of children who proceeded to shower everyone with ice-cold water balloons. I found one of the kids later and threw him in a water-filled ditch, much to the amusement of all his friends. It wasn't meant to be funny.
An honourable mention goes to the 15 hour, overnight bus ride from Bangkok to Chiang Mai in Thailand which involved the most obnoxious group of Israeli travellers I've ever had the misfortune to come across (and if you've ever travelled in South East Asia you'll sympathise and understand what that really means), bongo drums, faulty air-conditioning, crazy overtaking manoeuvres and a change of drivers at 80mph (the new driver had clearly never driven a bus in his life before).
I'll just link to Bear Shaped Sphere for a list of the other participants as I don't have time to find everyone else.
Posted by Matt at 14:09 2 comments Links to this post 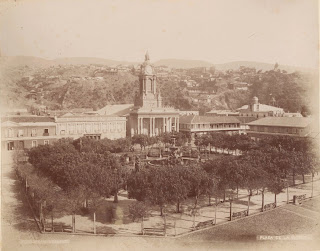 Valparaiso was so grand and pretty back in the day. It's still incredibly pretty, but in a run-down, nostalgic kind of way. A lot of people think that the city shouldn't be allowed to change, that it should be kept grotty, poor and downtrodden as that's where the city's 'soul' comes from. I disagree. Valparaiso was a clean, well-maintained, wealthy and culturally vibrant city in the past and aspiring to return to that is something that should be encouraged.
Don't listen to the hippies :)
Posted by Matt at 12:57 0 comments Links to this post 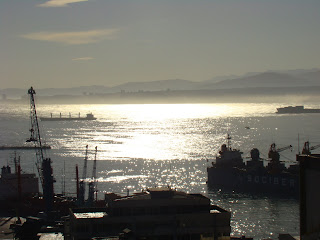