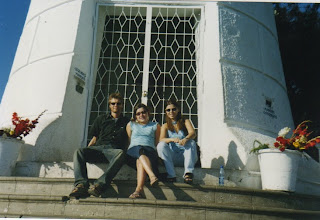 Wow, interesting to know that Santiago has changed so drastically in the last few years. Chileans always tells me that Chile (especially Santiago) 10 or even 5 years ago was nothing like it is now and it is continuing to change and develop at a rapid pace but I haven't had the chance to experience these changes first hand since this is my first official time living here. Hopefully the city continues to change for the better :)

I got to Santiago for the first time in 2009, found it very entertaining with some great old architecture. My guy and I enjoy going into the city for a night or 2 and exploring the environs. We had wondered why it had such a bad rap. Well, now I know. Kudos to Chileans (and others) for cleaning it up.

Great information in this post and I think there are foreign owned businesses catering to expats and the general security in tourist areas is way better than it used to be.

I am very enthusiastic about Chile.
And I am thankful to find such a detailed presentation from you, who lived there.

Hi,
I am about to move to Valparaiso (on the 1st of December) and will be staying there 2 months till February. While looking for info I stumblead across your blog. Very interesting to read, and very "expaty": which is a language I speak very well having left my home country (Italy) four years ago.
I was wondering if you have any tips to share about how to find accomodation there, a room or an apartment will do just fine as long as there's interenet connection!
Thanks for your attention and best wishes!
Fabio

"Chileans who had clearly been trained in the art of social niceties by a pack of rabid chimpanzees (this was, and sometimes still is, my view of how Chileans act in public)."

Ha. That was worth reading the post. Same in Poland sometimes.

Just looked up your blog again. I was astonished to find this post with some positive things to say about Santiago. I guess life is full of surprises. Of course the smog still remains.

I think Chile is generally a lot nicer above Plaza Italia but of course that is where the rich people live. So, overall Santiago is still pretty bad for checking out authentic Chilean things.

It should also be noted that all Chileans who are not from Santiago hate it.