It rather shocks me to say this...but September 1st will be my 7 year anniversary since I left England (not for the first time but this is the longest I've been away) and moved to South America. It was never supposed to be this long. The original plan was to spend 6 months out here, learn Spanish and then move to Spain. Barcelona was high on my list of places I wanted to live.
But things never work out as you expect...and here I am, 7 years later, living in Santa Cruz with a house, a business, 2 cats and 2 dogs and a whole life in Chile. Incredible. But really nice. I really like my life here.
So to celebrate this milestone, I'm going to bore you with a photo tour and commentary about what I've been up to all this time. It's going to take a few posts, so feel free to have a nap.
I started out in Ecuador. Why Ecuador? Well, I wanted to learn Spanish and someone had mentioned that Ecuadorian Spanish is really clear and pure (it is- definitely the 'best' Spanish I've heard down this way). And Ecuador is a small country with a mix of everything South American- tropical beaches, Andean culture, jungle, temperate rain forest, mountains...the lot. The perfect place to start out. Added to that was the fact that when I took the decision to come to South America, I was working in Bournemouth, England as an English teacher to foreign students. Once I decided on Ecuador, I successfully set about making Ecuadorian friends and had a couple of locals to look up when I arrived.
And here's a weird coincidence...I fell out of touch with the friend who was kind enough to pick me up from the airport and show me around Quito on September 1st, 2003. We're friends on Facebook but hadn't actually spoken or emailed or anything for almost 6 years. That was until last week when she borked her Facebook profile and had to create a new one, re-friending me (uh, that's such a horrible phrase and I feel dirty writing it) in the process.
Anyhow, I asked how she was and we got chatting. It turns out she almost died a couple of months ago from a serious case of pneumonia and is taking some time off to recuperate and travel. She said she wanted to visit Chile at some point, I offered to show her around and she's now arriving on guess which date...Yep, on September 1st, I'll be picking Caro up from the airport in Santiago, 7 years to the day she did the same for me in Quito.
So I spent 3 months in Quito. I left sooner than I expected as I got itchy feet and then robbed at gun-point (well, I'm pretty sure it was the guy's finger but I was tipsy, it was 4am and he had 6 friends with him so, despite pointing that out to him, I still handed over the $20 I had on me). But at least 5 other friends were mugged at gunpoint and I got tired of living in fear. Having to sprint the 4 blocks home from a bar or club to avoid getting robbed after dark got old pretty quickly.
Despite the danger aspect, I enjoyed my time in Quito and made some really good friends, some of whom I'm still in fairly regular contact with.
So I bought the cheapest ticket to another country that I could find...and that happened to be Argentina. Which I'll tell you about in another post.
Here are some photos from my time in Ecuador, back in the day when I was 25 years old and had pretty much no responsibilities. How times change. Apologies for the random picture sizes. Long story, too dull to tell.
Caro, the aforementioned old friend who's coming to visit in a couple of weeks, up at some Volcano near the equator. It was cold, windy and foggy and we saw nothing. I ate a guinea pig. A fun day out. 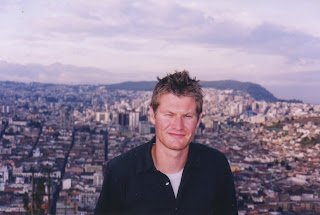 I can't remember the name but this church had been under construction for something like 100 years...you could climb to the very, very top of one of the steeples and the views were incredible.

I lived with some great people and made some good friends in the house known to everyone as La Casa de la Felicidad, on account of the massive, impromptu parties that were always thrown. It wasn't conducive to the 7am starts I sometimes had for work but, hey, I was 25 and could handle it. My leaving party lasted about 3 days. Good times.
That's Arne, Sophie, Gary, me, Frank and Sissy. The hand thing was in honour of that whenever the phone or doorbell sounded, whoever was last to put their thumb to their forehead had to answer. I was incredibly quick on the draw and only answered them about 5 times in 2 and a half months. 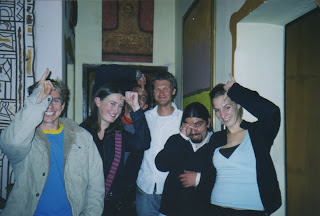 Lily acted as my guide on a trip Cuenca (she was a friend of a friend). Despite me not speaking much Spanish and her not speaking any English, we muddled through and got on quite well. Sometimes it's better not to be understood.
She took me with her family up to a tiny, dusty little village high in the hills where they were having some kind of festival (I never understood what it was about). It was weird and interesting. I ate guinea pig again. It's actually rather nice, a little like rabbit. And I really liked Cuenca- such a beautiful town. Apparently, the Cuenca accent sounds like bird-song, but my Spanish was so low-level at the time that I didn't notice. I'd love to go back and see if it's true.

I also went to Mindo, a gorgeous little town in the cloud forest. I took a lot of photos that weekend. Then I asked a friend to take one of me up in a place where you jump off a mini-cliff into a freezing pool of water. It's next to a waterfall. She walked backwards off the waterfall. And broke my camera. And she miraculously came out completely unscathed. Which kind of annoyed me a little- for a broken camera, I wanted at least a concussion.
And I went to the hot springs resort of Papallacta a few times- it's only a couple of hours from Quito in bus and a lovely way to spend a lazy Sunday. No photos- my camera was wet, remember?
I also spent a weekend in Montanita, Ecuador's top surf town. I took no photos with my new camera on that trip because it rained solidly for 3 days and the town was, literally, knee deep in mud. It's apparently a fun place when the sun comes out.
Next stop was Buenos Aires, where I ended up living for 3 years...
Posted by Matt at 18:35

Dude, are those pictures from a film camera? Old school!

Matt, I love your blog. I lived in Ecuador for a year y pico, and I totally remember all those spots. Makes me wish I was still bouncing around Latin America!

Thanks! There are definitely worse places to be living than Lat Am :)