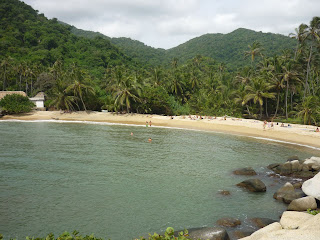 I’m posting this on Corrugated City and Colchaguino as I haven’t updated either for a long while, just to prove that I am still alive.

I’ve just got back from Colombia.

Over the past few years, I’ve travelled quite a lot- England, France, the US, Argentina several times…but I haven’t had what I call a real holiday- relaxing, doing nothing or doing something or doing both at the same time- since going to Brazil 5 years ago. After the stress of the earthquake in February, seeing all the destruction and nightmare living situations for a lot of people (and setting up a charity to help the worst affected in Colchagua has been even more stressful than the actual event itself), finding myself living on my own with 4 animals and trying to get through this colder than normal Winter, I really, really, really needed a break.

So 3 weeks ago, I just Googled ‘beaches, Colombia’ and ended up buying a ticket to Santa Marta, without really knowing what I was letting myself in for.

To get the negative part out of the way first, Santa Marta is only ok. It’s nothing really special. The beach is pretty crappy. There’s not much to the town apart from a small (but pretty and well-preserved) Centro Historico. 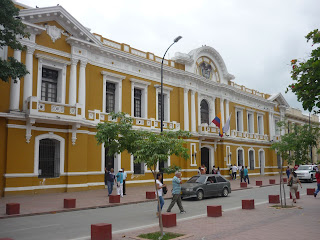 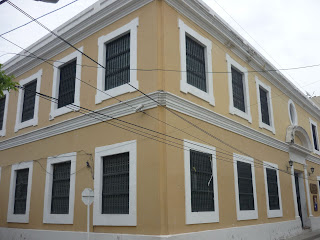 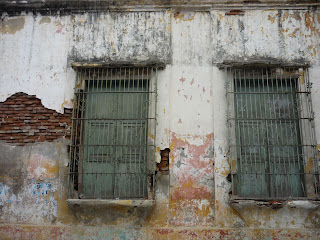 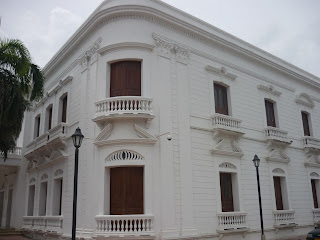 And that’s the negative done.

On the positive side, Colombia is absolutely awesome. I think speaking Spanish completely changed my experience. Last time I travelled around, almost 7 years ago, my Spanish was basic and everything was a bit of a struggle. I’d walk past a couple of girls in the street and hear this…

…and my brain would translate it all to:

“Oooh, look, a gringo, I’m going to call my brother around the corner and get him to mug the stupid gringo, beat him half to death and steal his kidneys hahahahahaha.”

This would make me feel uncomfortable.

But this time, I was able to understand what people were saying. And it turns out that what almost everyone was really saying was:

“Oooh, look at the gringo. He’s gorgeous. I don’t think I’ve ever seen a finer looking human being. That’s one hell of a good-looking gringo. I want to take him home and make him tomate de arbol juice until he just explodes with happiness. Hahahahahahaha”

This made me a little uncomfortable too- I’m quite humble - but uncomfortable in a happy way. And I do love tomate de arbol juice.

Also, speaking Spanish enabled me to pick out words and phrases particular to Colombia. That was impossible a few years ago- it was all just new vocab to me, I couldn’t tell the difference between accents or local dialects. Having lived in Argentina, Ecuador and Chile, I now can.

Colombian Spanish is lovely, particularly in the north, along the coast where the accent is kind of laid back. Vowel sounds are elongated and 'Js' are semi-optional. Trabaaa'o, vieeee'o. Watch a Colombian or Venezuelan telenovela and you'll notice.

I also really enjoyed hearing ‘A la orden’ all the time, meaning “What would you like?”, “How can I help?” or “You’re welcome”, depending on context. It seemed formal, but friendly at the same time.

Other little words that spring to mind…the weather in Santa Marta was ‘sabroso” (tasty) and everything else in the world is either ‘chevere’ (cool) or ‘tenaz’ (bad, but also good depending on context. Kind of like saying ‘fierce’, if anyone uses that word anymore. Do they? I don’t really know, I've lived too long away from the English speaking world.)

And finally, contrary to what I’d been told repeatedly- that this word is only used in Spain- Colombians love to ‘coger’ public transport and various other things. Childish fun. Yey!

Anyway, after just a night in Santa Marta, I moved 15 minutes away to Taganga, a backpackers haven in a tiny fishing village. Again, the beach there isn’t really all that great but I enjoyed my stay in Taganga. I found a private room for about us$10, met some nice foreigners, drank a lot of beer, ate a lot of fried fish, drank a lot of mango and tomate de arbol juice and had fun chatting to the natives too. 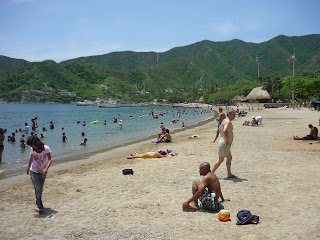 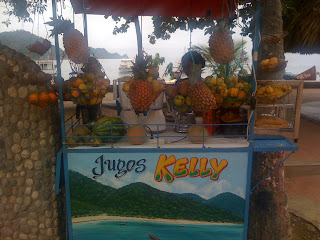 Set lunch for about us$6: 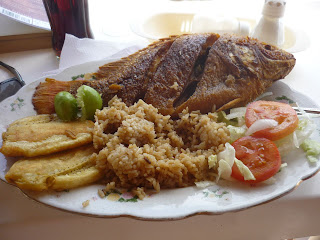 Ahhh, the natives. Really friendly, really gorgeous and really approachable. If you’re single, I would suggest that Colombia is the place to be, for both boys and girls. Of course, I was only interested in talking- pure political insight is what I was after.

I also spent a day and a night in Parque Tayrona, a national park with pristine beaches about a 60 minute boat ride away. The trip was a bit rough and, as I woke up late and got on last, I had to sit right at the front of the boat. When we started hitting waves, I got slung about a fair bit and ended up with a monster bruise on my thigh (look away now if you don’t want to see my bruised thigh). 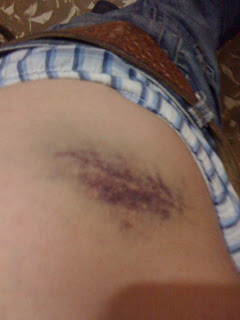 And the boat ride that caused it: 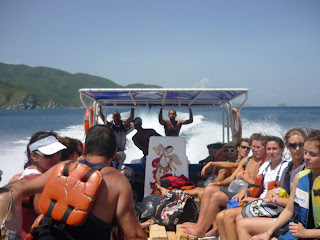 But it was worth it. I only went to the main beach as I was feeling lazy, but that was gorgeous. You can sleep in hammocks there or hire a tent (I did the tent). It was a fun day or so. 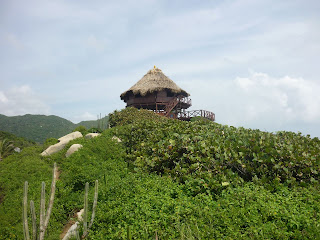 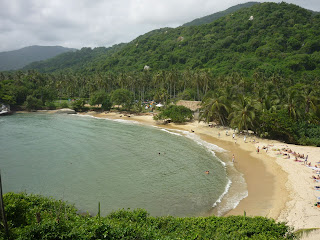 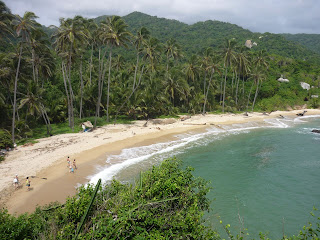 Cost-wise, for tourism, Colombia is probably about 10-20% cheaper than Chile. Both food and accommodation are this much less. But, as with anywhere, you can spend as much or as little as you like. Having had my trip back to England in March cancelled last minute because of the earthquake, I had some cash to spare and didn't really skimp on anything. I only had 10 days or so, so spending a bit more here and there wasn't going to make much difference.
And safety and security- both Santa Marta and Taganga are really safe. Police everywhere, friendly locals who never gave me the impression I was getting ripped off for anything. It was really nice to be able to relax.
The funny thing was, before I booked the trip, I was convinced that all I wanted to do was lie on a beach on my own, doing absolutely nothing. I spent several weeks doing just that in South-East Asia about 10 years ago and loved it. That was my plan for the whole 11 day trip. But it turns out that I get all the alone time I need in Colchagua, and after a couple of days, I was a-hankering for some stuff. Like people, noise, museums and bars. Particularly bars. So I changed my ticket and headed to Bogota for 4 days. A good decision as it turned out…
Posted by Matt at 16:35

Yaay! Matt's alive!!! Your trip sounds awesome! I can't wait to visit Colombia one day. So...did you bring back a Colombian girlfriend? He he.

I can't recommend Colombia highly enough for a visit...so much fun.

And in answer to your question, I prefer to travel light. :)

Again, nice posts about my country ^-^
Glad to see that you went to Parque Tayrona. You did miss out on one of the most calm and secluded beaches in the area though. Okay, it was that way back in the early 90's when my parents took me as a child:
Playa Blanca.
We were taken there by a local friend of my dad's and this was his top beach to recommend as Santa marta's not that great in terms of nice gorgeous beaches.
At the time (and hopefully still true today), Playa Blanca's only accessible by boat. Back then, you could hire one of the guys parked in their boats by the beach in Santa Marta or even Taganga, and they would drop you off right on the shores of this gorgeously secluded beach with super soft sand and the whitest I have ever seen (hence the name). Of course, there are people on this beach; enough to beckon several restaurants and fruit vendors going about with their fruit baskets gracefully carried on top of their heads (a true Caribbean treat to witness and experience). But the seclusion factor is felt when you look around and can't see any roads or anyone approaching the beach from the forest behind it. It was absolutely gorgeous and for close to nothing, you can peek your head into one of the restaurants, order the catch of the day with "patacón pisa'o", arróz con coco and lime wedges, go back to your bit of beach, and within mins, a guy will show up with your order. Use the fruit vendors for an appetizer if you feel that fancy and def get some fresh fruit from them for the dessert.

Well, that was my experience way too long ago, but I hope that Playa Blanca's been taken care of so that it is not flooded by too many people and so that if I ever go back, I can show my husband the same experience.