Some more images from the 1906 earthquake in Valparaiso. Part I is here 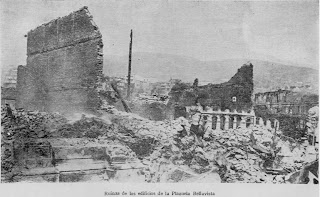 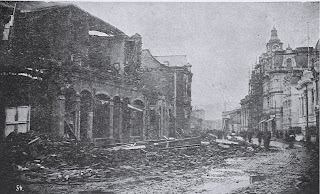 A Panoramic view of the Almendral. I can't work out where the photo was taken-I think probably from Cerro Bellavista. 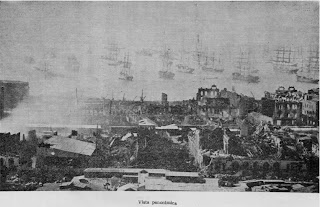 Thanks for unearthing (no pun intended) this book in www.memoriachilena.cl. The text almost sanctifies my great, great uncle, a priest, Arturo Rose-Innes, which possibly explains why to this day there is some form of school named after him in Vinar del Mar.

The family warehouse and offices, Edificio Rose-Innes, in Plaza Sotomayor survived the earthquake, but not later developers. Looking from the sea, the building was directly to the right of the statue to Prat. Judging by Google Earth its space is occupied by a large modern blue building. Can anyone provide information when this occurred, what the building is, any bcakground, etc?

Incidentally Arturo/Arthur Rose-Innes, went on to devise the first systematic English dictionary of Chinese-Javanese characters, doubling up as a Chilean consul in Japan

Fiona-that's awesome. I'm happy this blog has been of use to someone! It's always nice to hear from people who have ties to Valparaiso...

The modern blue building is actually a conversion of an older building that was there before. However, it's certainly not the warehouse of your ancestors as it was built by Arquitecto Esteban Orlando Harrington who worked only after the 1906 earthquake as far as I can make out. So he knocked down the warehouse and office and built his building.

This building was then knocked down on the inside and a new office block was built within the original structure by the Compañía SudAmericana de Vapores, one of the oldest shipping companies in South America.

Here's a photo of the building.

Such is life for Valpo's architecture.

I am very interested in your account of the 1906 earthquake as my grandfather's ship was the first on the scene (or one of the first?). I think they had either been in or near Valparaiso harbour at the time of the earthquake. My grandfather, Henry Stuart Knight, was 21 at the time and wrote of the horror of landing to see what could be done for the people, who were wandering around, dazed and too shocked to do much for themselves. He and the crew spent time helping to bury the dead and doing whatever they could before setting sail.

Thanks for your comment, it's always interesting to hear from people who have personal ties to these great events. I imagine your grandfather would have witnessed some pretty horrific scenes...

Yes. He said the scenes would be with him for ever. I have found out since that his ship was actually, if not in the harbour, at least so close to it that the lifeboats were readied in case they had to abandon ship.

I've seen some of the photos of looters who were summarily executed. My grandfather wrote that he saw one man, who had two tins of condensed milk and a small package being dragged by his thumbs behind a horse. Granddad said he would never forget the look of horror on the man's face. Anyone carrying something or out on the street after 6pm was classed as a looter and was tied to a tree, blindfold and shot. Inevitably, youngsters were also killed because people were hungry, needed food and were ready to risk death in order to find it..

Ok.. so now this new Chilean earthquake has peak my interest in my family history. My grandmother was orphaned in the 1906 quake. Lo and behold,her son, my dad is on a legacy-type trip in Chile and what happens....He is in Valparaiso and this huge quake rocks Chile. Scary. The 1906 quake was August 16th, my birthday. My grandma lost her mom and gained a grandchild 54 years later. Makes me think that life really is full circle.