I was dreading Fiestas Patrias. This area of the country usually turns into a complete nightmare of traffic and people during long weekends, bank holidays and school holidays. This makes it impossible or extremely stressful to get around in car, bus or even walking.

However, for some reason, Valpo and Vina were completely empty all of last week and even over the weekend. I have no idea why this was so and it even caught out the police. They were clearly expecting Sunday evening traffic chaos and were out in force yesterday but there were barely any cars on the road at all. It was quieter than a normal Sunday weekend in mid-winter. Very strange, but also very enjoyable for everyone that decided to stay in town for the holidays.

I didn't get up to all that much Fiestas Patrias-y over the last week. As I mentioned in the last post, the FPs don't really mean anything to me personally so it's hard to get excited. But I still did a few interesting things.
I did make it to a Fonda at the Sporting Club de Valparaiso in Vina. A Fonda is kind of like a little fair with stalls selling crap (it's FP tradition to sell Hello Kitty products and cheap sunglasses), a few fairground rides and dozens of little food stalls all selling the same things: BBQ beef, sausage sandwiches, empanadas, beer and chicha. It was pretty good fun. 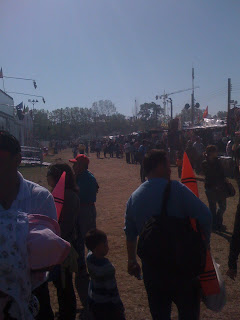 The most entertaining part was when we were waiting for some more friends by the obvious meeting point of the Ferris Wheel. The motor malfunctioned and the wheel sped up to a fairly speedy speed and wouldn't be made to stop for well over 10 minutes. Eventually the police arrived with a mechanic and he got it to stop. Some of the children who got off were delighted with their ride, some were crying. The parents looked terrified. 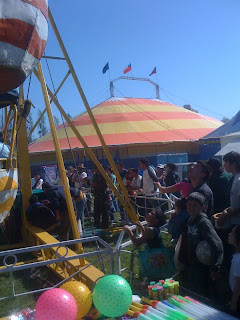 We decided not to go on the Ferris Wheel.

I went back to the dunes in Con Con with a friend. We stopped off for lunch at this tiny little fish restaurant on the way where we had really good food at absurdly cheap prices in what is little more than a glorified tree house with a kitchen attached. Unfortunately, I didn't take a photo and can't remember the name but next time I go I'll remember to...

After that, we headed for the dunes. It wasn't as much fun as last time. We got stuck. At the bottom of a hill. Late afternoon. Sun starting to go down. After an hour or so of inching our way out through the tactic of digging the tires out, placing snow chains under the tires for grip and then trying to move as far as possible before getting stuck again, we were found by a friendly dune buggy driver who phoned his friends. They rescued us with a winch, all the while chuckling and taking photos. I have no doubt they went home and told their friends and families about the stupid gringos who got stuck in the sand.

As we then headed out of the dunes, we had to cross the train tracks. The tracks are quite raised but usually easy to cross with a bit of care. However, in order to get out of the sand, I'd had to let the tires down to a really low pressure. One of the back tires caught on the track, squashed itself all the way to the alloy and left the car dangling on two wheels, stuck on the track. As you might imagine, being stuck on train tracks isn't the best place to be stuck. I actually thought the car had beached itself but fortunately, on closer inspection, it was just the wheel...I rushed out, pushed and a short while later we were unstuck with the car bouncing down the other side of the track and making noises a car shouldn't really make.

I'm never going back to the dunes. 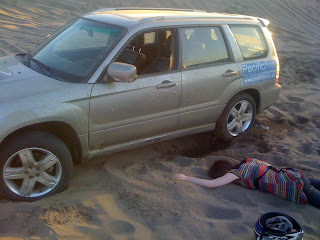 Yesterday, I decided that heading back to Cerro La Campana would be fun. I was right, for the most part. The last time I went, I ran up and down on my own as a form of exercise. The first time, I went with my friend Mike and we also got up and down pretty quickly. This time, I went again with Mike but also with another friend, Allie. As Allie is not very tall, we went a lot slower. This was actually quite a nice change.

Cerro La Campana at 6.30am from my house. 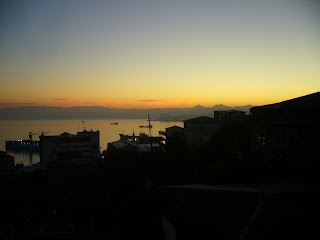 We saw 3 big-ish tarantulas on the path up. Short legs got a bit tired after a few minutes stroll. 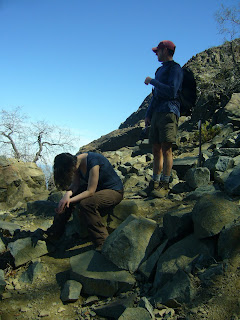 While Mike and Allie pretended to be rock stars, I maintained my English composure. 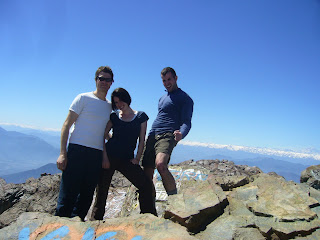 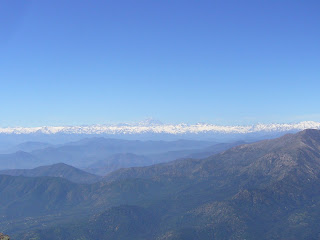 The main problem yesterday with slow hiking, however, was that it is coming into summer and the fly situation is pretty bad. The first couple of times I went to La Campana, there were no flies at all due to the chill in the air. Yesterday, from La Mina until about 10 minutes from the summit, we were attacked by tiny little Black Flies. Black Flies are bastards because they don't sting you, they actually bite you...until they draw blood...and then they all try to feast on that wound. Fortunately, they're incredibly slow so it's easy to kill them but they made a good hour of the hike quite unpleasant.

Anyway, apart from that, it was a good day out. The views from the top were spectacular towards La Cordillera but not so great towards Valpo and the Pacific. It was pretty cloudy in that direction. And when we were on our way down we actually walked into a giant mist cloud which was a great way to cool down. 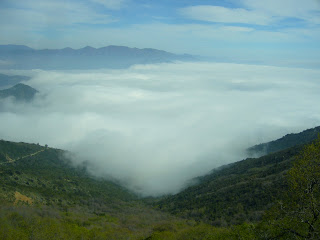 At some point soon, I might get around to posting specifically about Valparaiso as that is the main point of this blog. This personal doing stuff blogging is no doubt getting boring.

Interesting that Viña and Valpo were relatively empty - Algarrobo was packed, and we were quite glad to be staying out of the main town.

Yeah, i was reading the paper and the traffic jams were awful everywhere, including they said, between Vina/Valpo and Santiago. But actually in Vina/Valpo there was nobody around. Saturday afternoon was busy-ish in Con Con but nothing out of the ordinary. It was really odd...but really good as well...

great picture of the people below the ferris wheel. i'm sort of sorry i missed that.

B-thanks! Enjoying being back in Paris or missing Chile already??

Kacy-yeah you arrived just a couple of minutes too late. The speed of the thing was the funniest along with the parents hugging their crying kids as it span around and around. Some of the kids were loving it though...