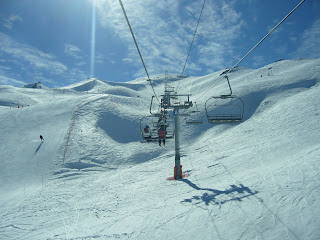 Last year I posted about Valle Nevado being overpriced and having some of the worst food on the continent.

So this year, I went back.

Now, I still believe that the resort is massively overpriced for the local market and also for what you get-the equivalent of a small resort in, say, Bulgaria. Including ski hire and lift pass, you're looking at about 48,000 pesos (us$100) per day. That's a hell of a lot of money for the average middle-class Chilean.

Luckily, on the first day we went- Thursday- Entel had a 2 for one deal on lift passes and a 20% discount on ski hire which reduced my cost down to about 30,000 for the day. Not too bad...

And the good thing about it being too expensive for almost everyone in Chile is that the pistes are completely empty. On a few runs down, we were the only people on that particular slope, something that is pretty much inconceivable in most European resorts.

Despite the fact that it hadn't snowed for about 3 weeks, the conditions were actually really good-decent snow and very little ice and, after a 10 year absence from the slopes, I was soon back in the swing of things. I'd forgotten two things about skiing:

By the end of the first day, my legs felt like jelly and I was exhausted (almost 5 hours driving didn't help with the exhaustion either). 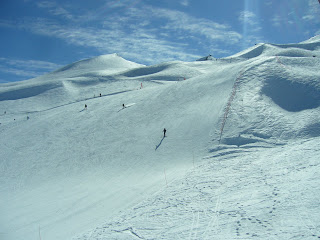 Ski buddies Olivier and Sophie. They're French but I don't hold it against them. 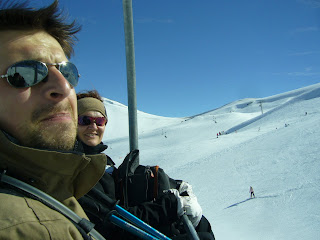 On the second day, we decided to give El Colorado a try, instead of Valle Nevado. I'm glad we did so that I can now make an informed decision as to which resort to go to in the future. El Colorado is a couple of thousand pesos cheaper but Valle Nevado is far superior. Valle Nevado has better equipment to hire and better slopes (and the snow was way better as well, El Colorado was compact and icy). Not only this, but at El Colorado they decided not to open one of the chair lifts. There was no reason for this but to save costs. The problem is that this particular lift services about 25-30% of the resort. So we had to pay full price but were denied use of a good proportion of the resort. I found this pretty outrageous. And they also charge 300 pesos to use the toilets. Pathetic. 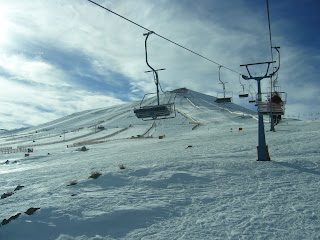 From El Colorado you can see Santiago covered in a cloud of toxic smog. In the morning, the towers of Sanhatten are still visible. 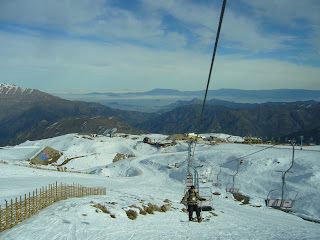 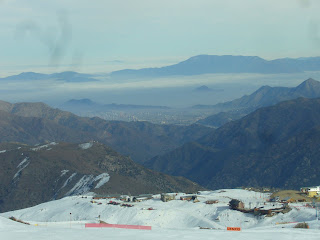 That's me. The black outfit's rather slimming, isn't it? 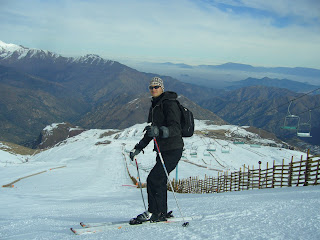 Farellones is the small village just below El Colorado. It looks like a Swiss ski village that's been abandoned for 50 years, bombed and then inhabited by vandals. In short, it is a typical Chilean town. 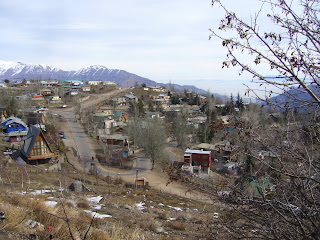 By mid-afternoon, Santiago was invisible through the lung-destroying smog. I feel really sorry for the people who have to live there full time, although it's nice to visit from time to time. 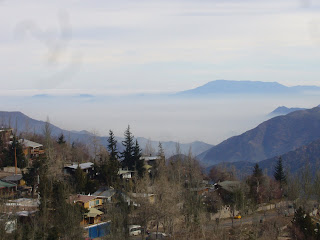 In summary, avoid El Colorado and go to Valle Nevado if you want to ski in Chile.

Really interesting read! Looks like a wild place still, but would lvoe to visit, empty pistes sounds like a result compared to the traffic jams in Europe!

Yeah, the total lack of other skiers makes the cost-benefit ratio a little better. Last time i skied in France, 10 years ago and before Christmas (i.e. not peak season), it was a nightmare-so many people. You get a lot of skiing done in Chile because you never have to wait for a lift.