Wanders, Walks and Tourism in Valparaiso

So I've had quite a fun time over the past few days. On May 1st, I went for a wander along Avenida Alemania.
Avenida Alemania is also known as Camino Cintura given that it runs right along the middle of the hills of Valparaiso. In general, below the Avenida is ok but above and as you start to get higher into the hills, the city becomes poorer and semi-slums appear. I say 'semi-slums' because I don't think they could be classed a real slums anymore. Sure, many of the areas are really poor but the vast majority are now connected to mains water and electricity and the roads are now paved. These are quite new developments-just a few years ago, these areas had none of these basic requirements. It's progress at the very least. 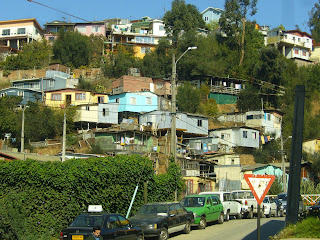 So the architecture along Av Alemania is quite interesting and sometimes plain wacky. Just up and along from Cerro Alegre, Germanic style is really popular. The Hospital Aleman is in the area and gothic mansions abound. 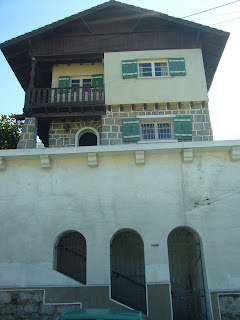 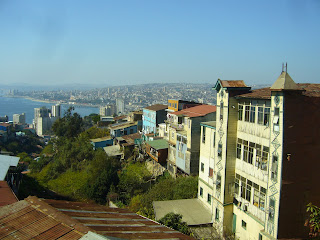 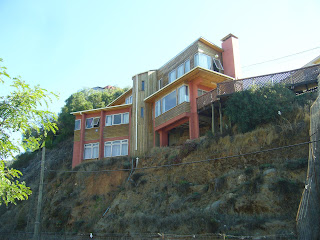 The road winds along and affords some spectacular views. 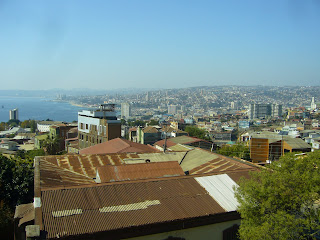 After 40 minutes or so from Cerro Alegre, you'll end up just next to the entrance to La Sebastiana, Pablo Neruda's house in Valparaiso at the top of Cerro Bellavista. From here I walked down the steepest street in Valpo, Subida Ferari and back along through El Plan. The weather was pretty great and it was nice to have a wander without any real destination in mind.
In the evening and pretty much all day on Friday as well I met up with two Belgian travel journalists, Debbie and David, who have the enviable job of staying in luxury hotels and resorts all over the world. This was their first trip to South America with Valpo being almost the very last stop on a 6 week tour of Buenos Aires, Argentine and Chilean Patagonia, San Pedro de Atacama and the Central Region of Chile.
Firstly, it was a lot of fun and I enjoyed showing them around the city and sampling the local brews (although David somehow became obsessed with the hydrochloric acid otherwise known as Cristal). I think they saw a side of the city that they wouldn't have normally seen if they'd just walked about on their own.

But what was especially interesting to hear were pretty much all my thoughts about the incompetence and lack of professionalism that surround South American tourism confirmed by people who actually judge these things for a living. Without going into great detail, it's basically that the people in charge on a national, regional and independent level are simply not providing the support or service required. Let's face it, they got in contact with me in the first place because there's no other English language information out there about Valparaiso.

From the Chilean tourist board that refused to give Debbie and David a couple of hours to show Santiago because Chile is 'not interested in the Belgian market' (because the internet is, obviously, limited to Belgium), the absurd reciprocity tax to the us$17,000 a week cruises with disinterested and occasionally arrogant staff, it's not the country that's the problem, it's the people working in it. Chile has everything to make it a fantastic tourist destination. It just needs to be managed and staffed by competent, intelligent and, above all, professional people.
During our conversations, what we always came back to was the difference in attitudes towards the customer (tourist) in South America and Asia. In Asian countries (and here I mean South-East Asia and China), the customer really is king. It doesn't matter if you're paying us$10 (me) or us$1000 a night for a room (lucky travel journalists not actually paying or people with lots of cash to spare), the staff will bend over backwards to help you with whatever you want. That's not the case in South America. There's a real lack of knowledge about what makes an 'experience'. You can have all the expensive toys you want on a trip but, at the end of the day, it's the people who make it all come together. They don't do a good job here, where it's assumed that expense and expense alone is the key to luxury.
I hope this changes over time but I don't think it will. It's such an ingrained part of the culture. You see it everywhere-expensive restaurants with untrained wait staff; tour guides who know nothing; surly or bored looking staff on organised tours etc. Training is simply not seen as important here. What is really required is to send higher level staff overseas to Thailand or somewhere similar so that they can see what makes great service. But this, of course, goes against the prevailing attitude that I just mentioned: training doesn't matter.
Debbie's travel blog can be found here.

And then on Saturday a friend and I went out for a pizza and drinks with fellow coastal blogger Allie. She, apparently, does stuff. I always enjoy meeting other bloggers. It's funny trying to get past the fact that they already know so much about you and sometimes you can't work out whether to mention these things or not. It's kind of like meeting an old friend you haven't seen for years-you know, when you don't have to go through all that weird getting to know you crap but can just get on with talking about this, that and whatever else. Anyway, for penniless, poverty-stricken EFL teachers, Allie and her friend Julie seemed quite happy living in Chile and it was a fun night out.

And now it's back to work dealing with maestros and other exciting things like that. Woo-hoo.
Posted by Matt at 11:23

This one is nice and great information of hotel service.