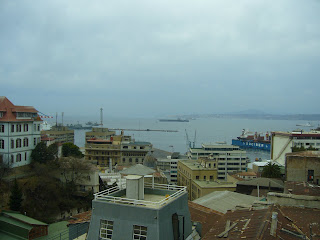 In the middle of the photo above you can see a large boat. This is the USS George Washington, a monster aircraft carrier carrying about 3400 troops and en-route for Japan. For the last few days, she's been sitting just offshore and it's been interesting to watch the small flotilla of boats going back and forth, ferrying men ashore and back again.

I've been rather stuck at home the last few days so I haven't been out to see what kind of havoc the sailors might have caused. As I haven't read or heard any reports of any mischief, it would appear they've behaved quite well. This is certainly different to my last experience of US sailors on shore leave from an aircraft carrier back in 2002 in Perth, when all they did was fight, destroy and cause various other problems. It was surprisingly entertaining to watch. From a distance.

3 years ago, another, even larger US aircraft carrier docked in Valparaiso-it carried over 6000 people. I was living in Buenos Aires at the time and I remember reading newspaper reports of upset punters, unable to get a prostitute in any of the major Argentine cities. They had all left to hit pay dirt for a few days in Valparaiso. This doesn't seem to have happened this time.

What I have noticed is that I've had quite a few more hits on this blog through google searches along the lines of 'Valparaiso brothel' and 'Valparaiso whorehouse' over the last few days. I guess these visitors left my blog a little disappointed when they didn't find the addresses they hoped for.

EMOL has a special with lots of info about the carrier. There are also lots of photos here.
UPDATE: The Washington has finally left...15 hours behind schedule. The reason? The falta de tripulantes, as the Mercurio put it or a lack of crew members. Er. Good going, lads. Glad you had fun. 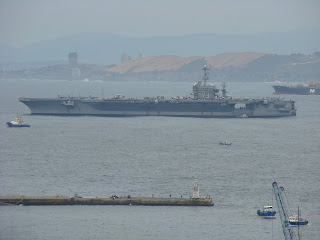 Did you not have to hear the incessant fog horn where you live? My roommates and I, at length, discussed what to say when calling to police to make a noise violation complaint. Also, my blog also had an increase in traffic looking for brothels in Valparaiso, top valparaiso prostitutes and such. I promise, they were more disappointed with my site than yours. At least you weren't overtly judgmental at them. :)

haha...the prostitution based traffic increase is funny...and i think your blog is quite definitely not the kind of info they were looking for. Thinking about their actions was probably not at the forefront of the sailors' thoughts :)

as for the fog horn, I've got really used to the noise from the port as it's almost right in front of my house and the noise reverberates around and up quite a lot. It didn't really register that it was worse than usual until the ship left and it quietened down a bit. Making a complaint would have been quite entertaining...