How To Make A Bacon Sandwich In Chile

There's not all that much that I miss about England. To most people's surprise, I usually mention food. Things like chicken pie, roast lamb/pork/beef with all the trimmings, cottage pie, sag wal, dim sum and pad thai amongst other traditional British dishes. But I think the one food item I miss most is bacon. Bacon is a gift from the gods. Smoked back bacon with just a thin line of fat. Maple cured bacon. Fatty, streaky bacon. Hmmm.....just thinking about it is making me dribble onto my keyboard.

For some unknown reason, proper British style bacon is not really very common outside of certain countries (Denmark, Canada and Australia are the three that mainly spring to mind). I don't know why this is. It's soooo good. Strange people, foreigners.

So what can you do about this unfortunate fact of life in Chile? Improvise. After much investigation, here's the definitive guide to how to make a bacon sandwich in Chile.

First off, just accept that there's no bacon. I've found the best substitute to be Jamon Colonial J.K. (J.K being the brand). It's available in most supermarkets and costs around £1.50/250g. Out of all the different hams I tried, I keep coming back to this one. Make sure you get slices with the all important fat on it them, like this: 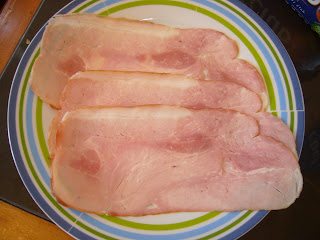 The next most important part of a bacon sandwich is the bread. Don't buy your bread from the supermarket. It's horrible. Go to a bakery. If possible, come to Cerro Concepcion and go to the bakery on the corner of Alte Montt and Urriola. The bread to buy? Pan batido as it's known in Valparaiso or Marraqueta as it's known pretty much everywhere else. Below is what it looks like. This is two pieces-break in the middle, horizontally to get the one piece required.

Now heat it in the oven for 5 minutes. 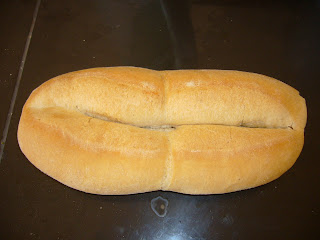 When I can be bothered, I fry a few red onion rings for added flavour. Once they're done, fry the ham until the fat on it has become crispy. 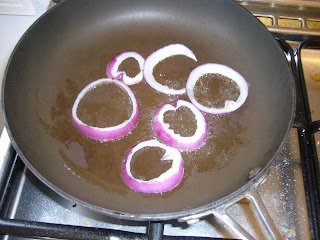 Cut the bread in half and add a little olive oil. Put the 'bacon' in. Then add a couple of slices of fresh tomato, a bit of salt, a sprinkling of oregano and, if you're feeling fat, some freshly grated reggianato cheese. I also like a bit of tomato sauce.

Cut down the middle and enjoy. Yum. 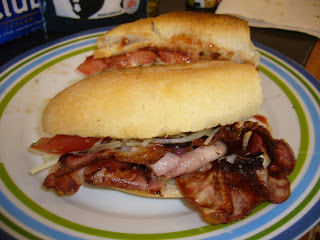 Don't forget to have a nice cup of tea afterwards. Here's my guide about how to make a good cuppa in Chile.
Posted by Matt at 13:36

Labels: What to eat in Chile

you made me hungry.the difference is that i can get some real bacon from the british shop here in paris...:p

i know you do. that's what i wrote it on your blog.

(and i'm actually going to the british shop)

where's the British shop in Paris? And what else do they sell apart from delicious bacon?

...I recall having bacon (tocino) on previous trips to Chile..but not as good as what you would get here in Australia, agreed. Surprising really, given Chileans facination with anything chancho...I'm not a big bacon eater but that sarnie does look good, Matt! (pity I can't get good pan batido here in OZ)

we don't have that nice British bacon here in Sweden either, although it's close to Denmark.

Patricio-yeah you can get tocino but it's basically fatty streaky bacon-very nice but too unhealthy for every day lunching. It's also absurdly expensive. Ham makes a decent substitute.

UnpronoucableSwedishName-No bacon? That sucks...and Chilean bread: i've been meaning to do a post on Chilean bread for a long time. It's sooooo good and there are so many different types. Chileans are the world's second largest bread consumers according to this study. I'd actually heard they were the largest but apparently the Germans beat them into second place.

Patricio-according to this restaurant review, there's a Chilean bakery on Brunswick St in Collingwood...

i agree - nothing, even a baguette, can compares to the delicious *marraqueta* (or pan batido, if you live in valpo)

...Brunswick Street, Fitzroy perhaps...hmmm...I don't know of any Chilean bakery there...will have to have a closer look...There are two Chilean / Latin American bakeries near my parent's place in the suburb of Sunshine. Its the closest thing I have come to a Hallulla or a Pan Batido here in Australia....not bad but not the same...don't know what it is but I think that Chilean flour is processed slightly different to Australian flour..

Oh! and thanks for the link to that restaurant in Collingwood too..sounds like one the check out!

The bread! The bread!
My favourites are the ones shaped like a flower, do you know which ones I mean? Are they called rosetas or something like that?

Have you seen people picking out the soft part in the middle of the bread and leave it on the plate?(to me, that's the best part of the bread!) I've only seen it in Chile (but from members of the same family, so perhaps it's just them...).
:-)

Ah the sandwich...it's a little after 130pm here and I've not had lunch... and no bacon in the fridge and I'm famished...I'll have to settle for a Fat Burger with bacon and cheese for now...That sandwich sure looked good!

Not sure about the flower one...

As for picking out the middle, i learnt a great trick for pan batido/marraqueta: rip open a little the bun, take out the soft middle part and then fill with freshly made bolognese sauce. Hmmmmmmm.......

Fat burger with bacon and cheese sounds pretty good too...