So after those teasing photos got your juices flowing, here's an account of my trip up Cerro La Campana on Saturday.

This was a trip that I'd been wanting to do for a while but I just hadn't got around to. Mainly out of pure laziness. My problem is that I love this kind of activity when I'm actually doing it. But getting to the start line, so to speak, is a real ordeal for me and something I'll find any old excuse to avoid.

I actually arranged to do this trip with Mike last weekend when I was drunk enough to really believe it was a good idea. But we confirmed during the week that we were definitely going to do it. That didn't stop me seriously thinking about phoning him up when my alarm went off at 6am on Saturday and saying that my back hurt. Turns out that Mike wouldn't have tried to change my mind.

As it was, we arrived at the park at around 8.15, only to be confronted with a sign that said the ranger's station opened at 9. Luckily the ranger turned up for work early, so we paid our 1500 pesos each and got underway. The weather was looking quite promising-it was terrible on Friday and Sunday but we got really lucky. The temperature was absolutely perfect for hiking, cool but not cold and more and more blue sky started to appear from out of the clouds.

Here's me at the very start of the day. 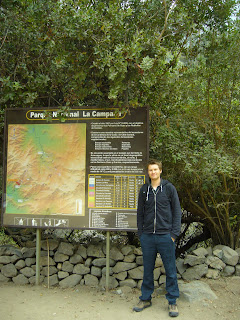 We had been told by various people that it's a four to four and half hour hike up and around 3 back down. A pretty long day. 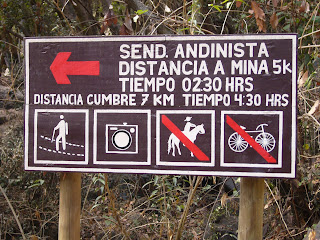 I have to say that the hike is reasonably tough going. There's no problem with altitude as even at the peak, you're only 1900m above sea-level. However, the start of the trail is at 400m so you're hiking 1500m in altitude in just 7km. That's a pretty decent gradient-there's precious little flat ground on the way up. It's mostly solidly uphill. To give you an idea of the slope, Mike was less than a couple of metres behind me when he took this photo. 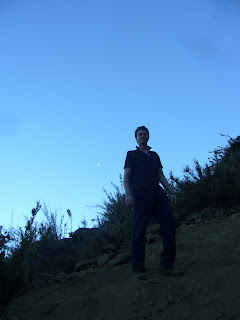 After about 30 minutes of walking, we'd left the cloud behind. The next two photos are looking west towards the Pacific. The blue line on the horizon is the water. 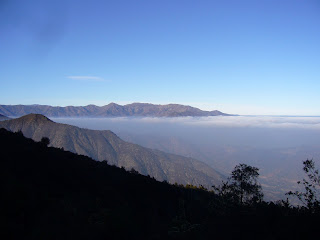 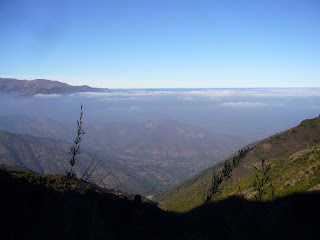 We covered the first 5km to the Area la Mina in just an hour and 40 minutes. It's quite a nice little walk up through Chilean Oaks with the occasional clearing allowing for views like in the photos above. I can't find out what was mined there...I've found three different stories about what was mined and until when. It could be gold, copper or quartz and it could have been going on until up to about 10 years ago. Maybe someone can help me out. 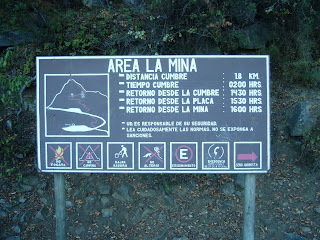 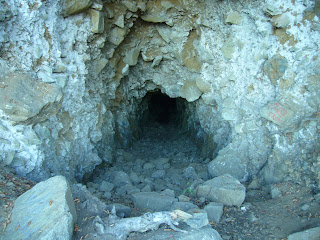 After reaching the mine area in so little time, we were determined to get to the summit in under three hours. It's only another 2km from the mine but the trail becomes progressively steeper. The first half hour was ok, just steep. But then the walk becomes less of a walk and more a scramble over rocks and scree along a terribly marked trail. Still, we were making good time. 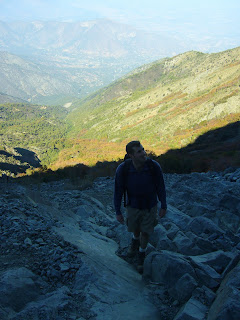 After about 20 minutes, we reached this plaque. It turned out that I wouldn't be the first European to reach the top. Some bloke called Charles Darwin had rather beaten me to it, some 174 years earlier. Bastard. 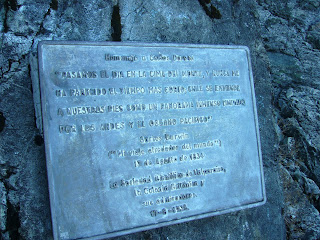 Here's me looking pissed off at Darwin. 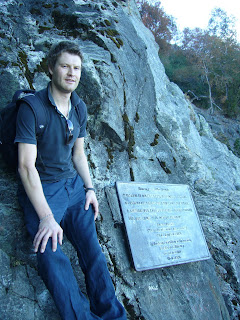 It was at this point that the trail becomes rocky and scree-y. I have to say, it's not that much fun but you know you're just being tested to see whether you're worthy of what awaits at the top.

The three hour mark was starting to come up fast. Every time it looked like we were about to arrive, another bloody rock was laughing at us. Eventually, we did reach the top, to be rewarded with some incredible views.

Look west and you see the Pacific Ocean. 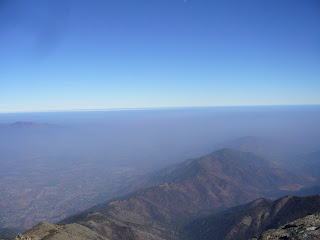 Look east and you see the Andes and Aconcagua, just about visible through the cloud in the centre of the photo. 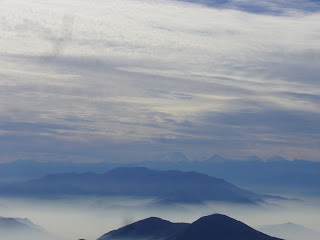 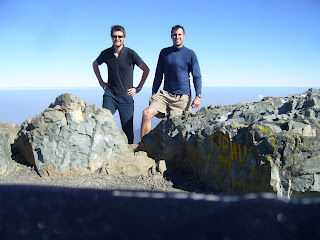 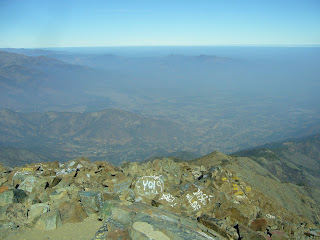 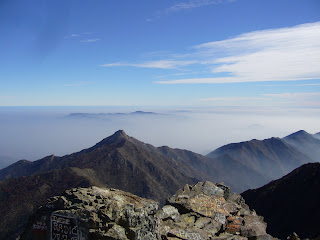 Someone had left their trousers at the top. Bet they were pissed off when they got back down to the bottom. 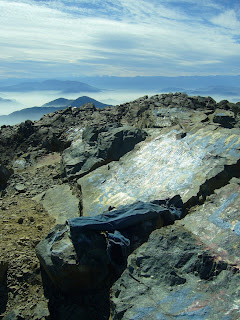 After 40 minutes or so at the top we headed back down. We chose well arriving early. We ran into quite a few others climbing up. It was really nice to have the mountain all to ourselves for the time we were at the summit. Also, just as we started to descend, the cloud rolled in and ruined the views for all those who started the day later than us. Ha-ha.

Here's me at the bottom. 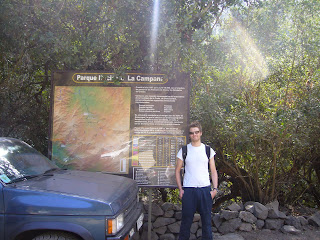 We went for a huge lunch at a restaurant called No Me Olvides in Quebrada Alvarado. After a massive costillar, empanada and a well earned beer we set off back home.

If you like a bit of hiking, then a day climbing Cerro La Campana is highly recommended.

So how am I feeling? Well, apart from severe pain in my calves and thighs, crippling pain in my shoulders, a slightly twisted ankle and stabbing pains shooting down from my lower back to my knees, I feel absolutely no ill effects from the hike at all.

Actually, I don't feel all that bad and certainly a lot better than I expected. This is the first hike I've done for about 6 years. Hopefully it will be the first of many over the next few months.

Oh, by the way, we took 2 hours forty five minutes exactly to reach the top and 2 hours five minutes to get back down. Not bad for a slightly overweight Englishman with crippling back pain, eh?
Click here for my second visit to Cerro La Campana and to see even better photos all the way to Valparaiso.
Posted by Matt at 19:36

Good effort! Yeah, I remember it taking us around 3 to 3.5 hours up and 2 down back in 1994...but back then I was a spritely and fit 24 year old....what did I tell you about the graffiti up there....it just totally ruins the whole experience and makes you wonder about the mentality of some people!

Yeah, the graffiti is a bit pointless really and it completely covers the top. The photos don't really show the extent of it.

Actually, just before we headed back down, another person turned up and told us that before the hike became popular, there was a 'guest book' at the top which could be signed by everyone who made it up. That got vandalised and ripped to shreds. Then the graffiti started.

The way to La campana starting at the bottom of the hills near my home at 34 bus stop itis sharp,challenging and sure more fun than the one by the main access to the park.
two weeks ago my friends and I took that waving narrow path to La Campana and we could not make it to La mina because it got dark half an hour to it.we stay at the second hill you can see from the top of La campana.
among some old and tall "quillayes"
there we had an "asado" .
if you ever make an asado make sure to get two sticks of "boldo" to shread the the meat.
you will never forget that taste.
in the morning we keep on going to and we got to La mina were my lazy friends stayed all the sunday afternoon .
I took my camera and got to Darwin´s plate .
On the way down by the same path I lost my camera but I found it on Monday after two tries to find it.
In granizo also you can visit the "Stone ship" near the road up to the park.it can be seen from the main road at your right when you go up.
greetings.