A while back, gave a run down on where to stay in Valparaiso, Chile. One of my recommendations was the Hotel Gervasoni. The hotel is pretty spectacular and a very impressive renovation job-a bit fussy but i guess that's the idea, trying to evoke the original splendor of the property.

Anyway, they opened their restaurant a couple of months after i wrote that post and just before my trip to Buenos Aires, i finally managed to get there for dinner...

...and the restaurant is nowhere near as good as the hotel. The problems start in the details. As the restaurant opened some time after the hotel, it appears they rushed the decoration, ran out of money to do a proper job or at least didn't pay as much attention to detail as they did upstairs. There are some really nasty spotlights and the curtains look like they come from Butlins. The bathrooms also suffer from a lack of design quality. The cutlery is cheap, nasty and doesn't match.

On top of this, the restaurant is really expensive for Valparaiso, around 10,000 (us$20) pesos for a main course.

They brought us cheap water biscuits and crappy canned dip to start with and then we had salmon stuffed with cheese and bacon (pretty decent but the salmon didn't actually taste of anything) and a couple of steak dishes (one of which came with mashed potatoes with crab but didn't actually contain any crab). Nothing was above average.

The final lack of quality came with the coffee. Actually, it didn't come with the coffee and that's just my point. An expensive and wannabe luxury restaurant should be serving petits fours with coffee, or at the very least a piece of chocolate. But at the Gervasoni, you get your coffee and that's your lot. This is really wrong-to be honest, had the evening ended with a nice coffee and some delicious little cakes alongside, i'd almost certainly have better memories of the meal. As it is, my abiding memory is of a restaurant that styles itself as 'luxury' but is, in actual fact, anything but. 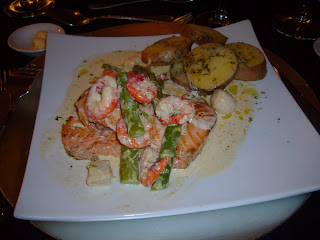 And here's the restaurant...there were only four of us there all night, despite it being Saturday in high season. 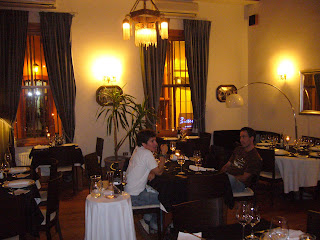