I've just got back from Argentina and i feel i owe everyone over there an apology. It's common knowledge that there's a bit of a problem with change. There is none. There are No Hay Monedas signs in pretty much every shop you go into. Sometimes this is a good thing as you end up getting a ton of stuff for free. Or you don't pay for a phone call as the guy can't give you 1.50 pesos change from a 2 peso note (this happened to me-the guy said, 'oh well, you'll just have to owe me'. Imagine the look of shock on his face when i walked by half an hour later and gave it to him. 'De donde sos?' he asked. I replied. 'Por eso' he said.)

Anyway, i looked into my wallet just now and realised that i had accidentally returned with 43% of ALL THE COINS IN CIRCULATION IN ARGENTINA. For that, i am truly sorry and hope that everyone in Argentina can forgive me. Here are the coins. Please don't drool Argentina based readers. 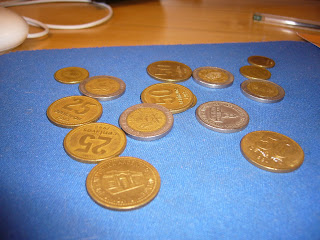 This wasn't exactly a pleasure trip to Buenos Aires. In fact, i went because i had to pay my tax bill. This will be the last time i pay tax in Argentina, thank god. I believe i am one of only three individuals who pays tax over there. The other two are Felisa Miceli and Guido Alejandro Antonini Wilson. Oh, hang on.

I didn't do much else in my short time there. This was mainly due to the fact that i was actually melting. It was 39C and humid for three days in a row. The tarmac was spongy underfoot. Not conducive to doing a lot. Still, on Sunday i managed a 15km-odd walk around town and the ecological reserve. I came back with blood dripping from between my toes-new sandals-and a face redder than Red Lobster. It was fun all the same.

I mentioned on my last trip to BA last month that the hassles of the city didn't affect me as i could just ignore them, not having to live there and deal with them on a daily basis anymore. The same held true on this trip until yesterday afternoon. Anyone who knows Argentina knows that trust just doesn't exist. Everyone is out to get one over on everyone. Family, friends and co-workers are fair game. Anyway, i ignored this until i was just too bloody hot to be able to.

The teller in an internet cafe tried to charge me 1 peso for 22 minutes of internet time, this despite there being a big sign behind her head stating that under 30 minutes costs 75 centavos. When i pointed this out to her she argued with me. I pointed it out to her again and she said, 'Fine, i'm not going to fight over 25 centavos.' I asked her why she was fighting then? I then asked her why she thought it necessary to try to rip me off in the first place. The answer, 'Asi es la vida.' I told her that i thought her life was extremely sad and that i pitied her for having to act the way she did. She called me 'pelotudo'. I gave her the extra 25 centavos she'd wanted all along and bid her farewell, with something about 'la puta que te pario' serenading my exit. Lovely young lady.

And now i'm back in Valparaiso so more blogging about here again soon.
Posted by Matt at 20:25

Why did you bother the poor girl over 25 centavos?

ya all are naturals...nothing like a good hard laugh!!!