A weekend in Santiago

We had a wedding to attend on Saturday in Santiago so we decided to go on Friday and see some houses for a client of ours. Despite my general dislike of Santiago, there are some parts that are really quite pretty on a sunny day. We went to see some houses in and around Providencia. There are some great properties in Santiago-loads of 1930s-1950s art deco and modernist houses with beautiful, sweeping wooden bannisters, huge art-deco bath tubs, high ceilings, gardens and other things that make life just a little nicer. Unfortunately, Chile is in the grip of a yuppie phase of its existence and most Chileans are happy to see these properties destroyed to make way for cheap, nasty DIY tower blocks where you can listen to your neighbour's number twos and all night shenanigans. This is slowly changing and Chileans are starting to wake up to the fact that these houses will be lost forever but the construction companies have too much economic power. It's hard for councils to say "no" as they need the money. My personal view is that there's some really, really decent profit to be made from remodelling existing structures and saving Chile's architecture. Obviously not enough to satisfy the blood-sucking construction companies but enough to make small-scale investors more than happy. And i'll be happy just to see these houses still standing in a few years time.

So, onto other topics. On Friday night we met up with some friends in Piola in Vitacura. Piola is an Italian pizza chain that was born in Treviso (aka Benettonville) and has a terrible reputation in its home town. Judging by Santiago's example, i'm not at all surprised. The entire night was a fiasco. Despite all ordering at the same time (and the restaurant not even being very busy), the food arrived at intervals of about 20 minutes, meaning that some of us had finished long before the others had even received their food. There were no pint glasses available (again-restaurant not even close to full) and we were told we could only have 330cc glasses and we'd be charged the higher price as well. The pizzas were undercooked. I complained and asked to see the manager. Instead, they sent up an inexperienced 'hostess' with large breasts swinging in my face to try and calm things down. This just enraged the girls present. The hostess finally offered a half-arsed apology and said she would 'see what Piola could do for' us. The answer? Absolutely nothing as she didn't return and then hid as we were leaving. We felt it necessary to leave just a 50 peso tip (that's 5p in England) in order to show that we hadn't just forgotten to tip and demonstrate our displeasure (to say the least). Moral of the story? Do not eat at Piola anywhere in the world.

Now, on to Saturday night and the wedding. It was a small affair, held at the Hyatt for just 350 of the bride and groom's closest friends. The Hyatt doesn't look like much from the outside, kind of like a glass-tipped suppository, but it's pretty cool from the inside with what must be one of the biggest atriums anywhere. The wedding was quite fun, although i left early as i felt a bit sick. Here's some proof that, when drunk enough, Chileans do know how to have a good time. 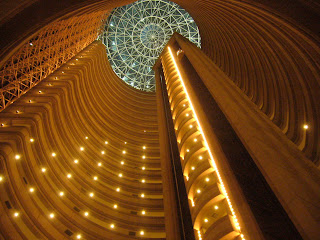 This child is my mortal enemy and is, in actual fact, the devil himself. 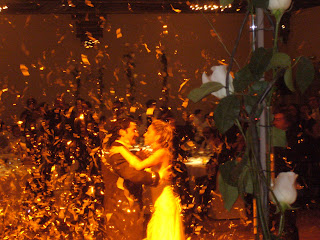 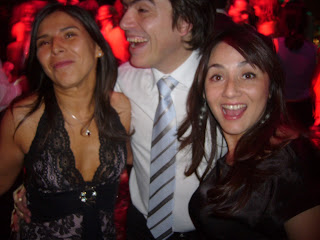 On Sunday, Lore's mum found an araña de rincon in the bath and trapped it. This spider is Chile's only really poisonous beastie and can cause severe pain and partial paralysis if you're unlucky enough to get bitten. 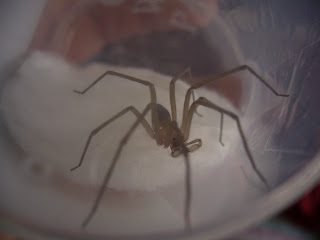 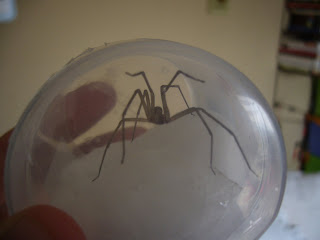 And on Monday, we had a really full day running around the entire city-starting off in Las Condes for a meeting and then heading to Santiago Centro to sign some papers. As it was lunch time, we headed to Domino. Domino is what fast food should be like everywhere. You walk in, stand at the bar and order from one of the many white-dressed waiters. Your churrasco or completo will arrive in just a couple of minutes. And it'll be the best churrasco of your life-tender, butter like strips of beef and tomato in a big bap. It's on Paseo Ahumada and Moneda 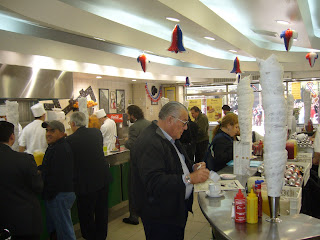 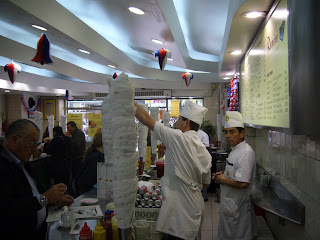 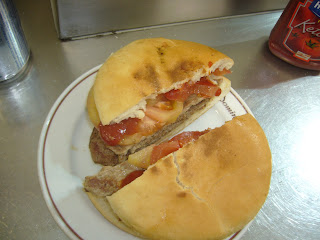 After lunch, we had to go to the delightful and charming neighbourhood of Pudahuel where we went to visit a demolition yard (unlike in Buenos Aires, demo yards are few and far between-it took us ages to find out about the existence of this place). We left as soon as we could as the smog in that part of town is awful and my head was hurting like hell. There were a few things that might come in handy for the house so we'll have to go back at some point. Maybe on a sunny day. After this we headed over to todoyeso to see about the cornices and moldings we're going to put back in the house. Actually, we look around their showroom and then go somewhere else we know of to get it all 40-50% cheaper. Clever, eh?

And then after this long and tiring day, we drove back to the coast for a bit of fresh air. On Wednesday, we're moving back to Valparaiso. Finally.

By the way, today is the 34th anniversary of the military coup that lead to a couple of decades of Pinochet in power. If you want to read bloggers' opinions on today's events i'd suggest heading over to bloggersinchile and checking out what other people have to say. I keep firmly out of politics as that's not the intention of this blog. Pretty pictures and positive, happy things are the order of the day here.
Posted by Matt at 10:40

hahaha, I keep politics firmly out of my blogs as well. That's the way to go :)

I enjoyed this post of yours immensly. Great photos too...

I agree with everything you said about the housing developments here in Santiago. My husband's passion is renovating old houses but they are quickly disappearing.

btw, next call me about where to go eat in Santiago!