The floor in our downstairs flat was supposed to have been polished and varnished by today. It's not completely finished...and what has been done has been done really badly meaning we're making the guy do the work again. So this also means we won't be moving back until next Monday. A big pain in the arse as we're both desperate to move home. At least this time we know for sure it'll be next Monday as there's nothing but the floor to done.

In the meantime, work upstairs is moving along at a hell of a rate. Remember this photo from the top floor a couple of weeks ago? 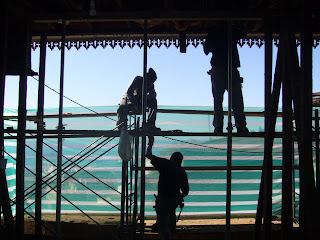 This is what it looks like now from the inside. Also, the exterior corrugated iron has been painted its shiny new colour (photos to come when the scaffolding is taken down next week). 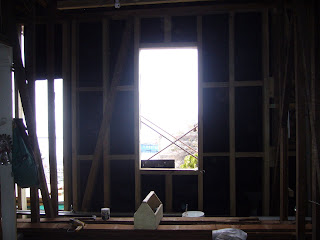 On top of this, the entire middle floor of one side of the house has been rebuilt and repainted outside and the adobe has been put back in place on the inside. We're saving as many of the original adobe blocks as possible because it's a far better insulating material than chemically produced glass-fibre wool. It's also cheaper as we already have it. The tubing for the house's new electrical system is being put in place, the carpenter is making new windows, the plumber is plumbing and the Consejo de Monumentos Nacionales is deciding whether to let us make the exterior changes that we want to make to improve the property and make our lives more pleasant (i'll tell you what the changes are if and when we get permission). 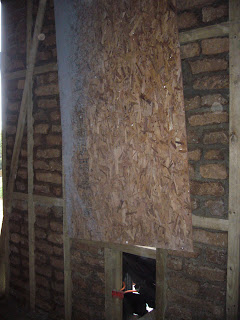 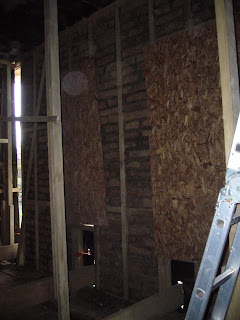 So, lots of progress but not quite enough in our flat. If the guy varnishing the floors gets it wrong again, he's going to lose some fingers.
Posted by Matt at 14:23

I hope that some of you will drop by and say hello.

Greetings to all Chilean friends from Ireland

still, despite the frustrations everything is looking good!

you must be so anxious to move back in, I can only imagine!

yep, desperate to move back. the photos are pretty much all from the upstairs part of the house-it's 2 independent properties in one big. the flat on the ground floor is where we were living and where we'll live until the upstairs house is finished. I've not posted many pictures of downstairs but i can't wait 'til next week when i'll be able to take a load of photos and publish them on the blog...we're so close to being able to move back after quite a few postponements. i just want to sleep in my own bed again...!

We are also in a renovation mode right now. My wife decided to transfer to another condos for rent in Singapore and luckily the HOA there agreed with our renovation request. We would like to make a Mediterranean inspired and we are at the end of the renovation process, atleast.