It's been a while since i've posted any photos of Valparaiso as we've been living in Renaca for almost 3 long months now. I can't believe it's been so long. Anyway, i had an appointment today downtown and i decided to walk back along Av Brasil in order to take some photos-there's some great architecture along Brasil.

On the corner of Las Heras, there's a whole block of beautiful buildings in really good shape. Photos below. The first couple of photos are of a building used by the local police. Lucky pacos. 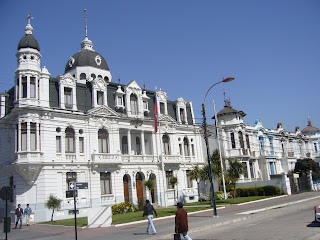 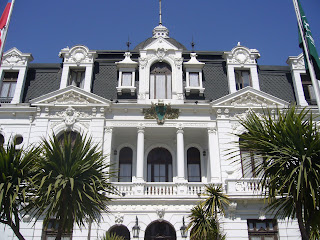 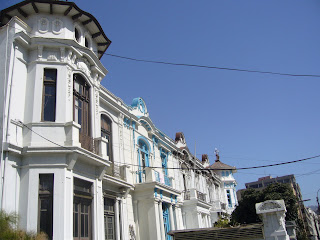 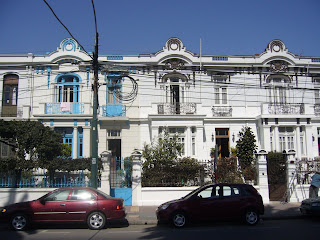 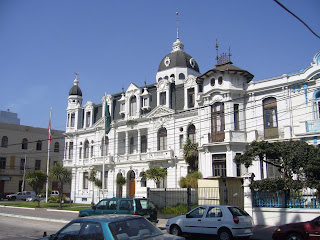 That cloud of smoke isn't smoke. It's steam from the Nescafe factory. Valpo often has a lovely aroma of coffee hanging over her. 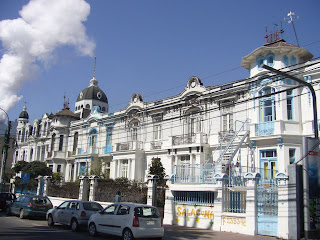 I also walked through Plaza Anibal Pinto at the bottom of Cerro Alegre/Concepcion. This is where the now defunct Cafe Riquet is. There was some kind of free hippy concert on today with arts and handicraft for sale so i moved through as swiftly as possible. Here's a photo. 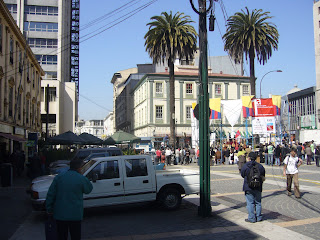 And this photo is of the huge apartment block right on the plaza. I really like this building from the 1940s or '50s-the round stairwell towers with glass bricks are really cool and i once spent a Saturday night on the terrace of the Brighton opposite watching an old couple dancing tango in a dimly lit room on one of the top floors. I'm not romantic, but that was beautiful to see. 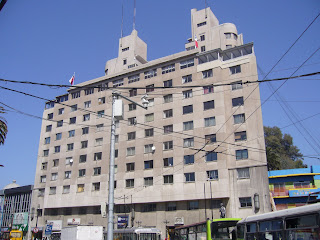 And finally, a return shout out to fellow blogger in Chile Kyle over at lovetotravelchile, doing a fine job of explaining what to do and how to do it in Chile.
Posted by Matt at 18:50

Coffee? Nescafe no-es-cafe! And yeah good job dodging that bullet the valpo hippies they seem like they're really full of themselves.

You're right..nescafe isn't real coffee...but to make nescafe they have to toast and crush real coffee beans...so parts of valpo usually smell of fresh-roasted coffee. Nice.

Hey, thanks for the shout-out. I'll probably be doing a weekly link thing so if you don't mind I'd like to include your blog in it if you don't mind, as you seem to be a Chile blog that updates more frequently than others. You're under no obligation to reciprocate :)


How's the coffee culture in valpo compared to beunos aires?

Also, a couple of years ago it was a nightmare trying to get a cup of real coffee. Nescafe rules here. However, it's now pretty normal for restaurants and cafes to have a proper coffee machine. Starbucks and its chilean rip-off Starlights are increasingly popular. So it's not impossible to get a good cup of coffee, just that the idea of spending an afternoon in a cafe reading a book is anathema to chileans.

Starlights rocks, their logo, their absolutely senseless name, everything - it's such a crass ripoff we could be in Beijing, if only Santiago had smog.

It's hard to find coffee in Chile but not that hard and once you do it's decent as hell. Also, cafe literarios are totally chill and they stress the book-coffee connection a lot more than anywhere in the states. Yeah, starbucks + barnes 'n noble but cafe literarios knock that commercialized shit out of the park.

Excuse me while I vomit I just wrote way too much nice stuff about Chile.

Please do not return unless you have something insulting to say about Chile.

Coffee can be good but it's always served so bloody cold. I always specifically ask for my cortado to be very very hot and it still usually arrives tepid. I just keep sending it back until it's hot enough or when i can see that the milk foam is clearly spit foam from a disgruntled barrista. The excuse i hear time and again for cold coffee is: "But the water is boiling hot from the machine and it can't be any hotter." To which i reply, "Err, yes. But the milk needs to be heated otherwise the temperature of the entire coffee is reduced." Rocket science.