Renovations-The outside and the dungeon

I realised today that i haven't posted any pictures of the house from the outside. Actually, i have (in a previous post full of Valpo photos) but i haven't explicitly said which house it was. This was partly for privacy purposes and partly because i just forgot. Anyway, i don't appear to have any psycho stalkers who want to find me and kill me so i'm going to risk showing the house. As part of the property is going to be our full time, walk-in office, i may as well be open about it all. And also, if you just ask around on Cerro Concepcion, someone will know who i am. It still surprises me when people i've never met already know who i am. That's one of the good and bad parts about living on Cerro Concepcion-everyone knows everyone, like in a little village. Fun and also a little annoying.

So with too much further ado, below are some photos of the house that i took before the work started. The colour is going to be very different but i'll show that another time. By way of explanation, the ground floor is the independent flat we were and will again soon be living in and the two floors above are where we'll live when the work is finished in December. You can see that it's a pretty big job-we are, to all intents and purposes, rebuilding the entire timber structure of the house, re-laying all the wooden floors (after laying a concrete floor down between levels), re-wiring the entire house, re-plumbing, installing central heating, replacing all the cornices and moldings, re-painting the exterior, putting in a new kitchen and 3 new bathrooms, obviously re-painting the entire interior and doing something else that i can't mention just yet. In 7 months. Crazy? Possibly, but this is something we love doing and is part of our business so it's all good. And it's economically a sound project as the house will be worth 40-50% more than we put in once it's finished.

I forgot to take photos of the guys working on the scaffolding outside but i'll do so early next week. So that was actually quite a lot of ado. Now for the photos of my ship-shape house. 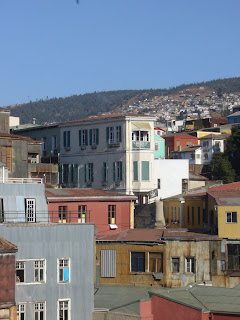 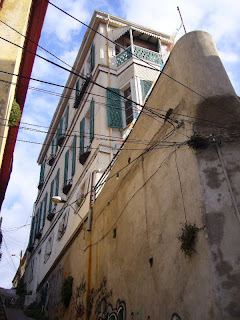 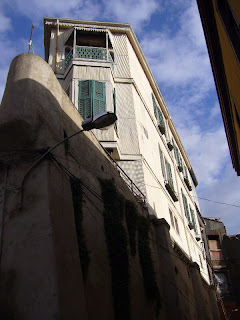 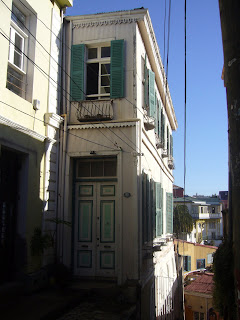 Also, the floors of the flat are being re-polished and varnished today and tomorrow. We're going away for the weekend. The joys of Santiago and a big family wedding await. On our return on Monday, the floors should be ready but we're going to leave them 'til Wednesday to give them time to completely dry out before moving lots of heavy furniture around.

Anyway, a while ago I posted a picture of the one room in the house that's slightly underground. Here it is: 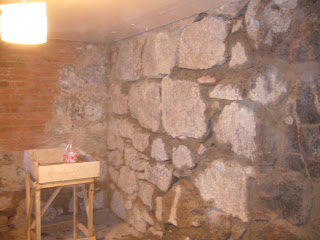 This is how it looks now. The floors needs varnishing and that's about it. You can see the cement in the bottom corner is still not dry after almost a month. That's because the room doesn't see much sun and, as it's winter, it's too cool to really dry properly. Next week we'll have the central heating on which will dry it all out in a couple of days. It's quite cool to see how the house was built-huge rocks and then bricks on top. The big wall on which the house is standing is actually all made from bricks. A previous owner cemented on top of the brick to give the 'muro de contencion' more strength. That's a shame, as i like the brick work, but it's probably a good thing. 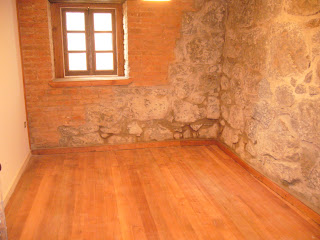 That basement room would make a killer wine cellar!

Btw, did you independently contract maestros to do the house or did you hire a construction company? I only ask because my husband's family has done so many renovations and they built their own beach house contracting maestro's. My husband is also a constructor civil so he knows a lot of maestro's who are really good. Let me know if you are looking for any maestro's or anything like that!

We originally spoke to the builders independently but as it became clear there was quite a lot of structural work to be done we hired the architects the builder usually works with. We've been really happy with them and they've proved themselves to be far more diligent and on the ball than we expected. Also, it'd have been impossible to undertake the project without architects as plans had to be submitted and permits granted (Valpo's UNESCO billing makes work more complicated). It's also reduced our workload enormously as we can focus more on the aesthetics rather than the construction side of things. We've also met some of the key people at Consejo de Monumentos Nacionales through the architects, something that's really useful.

Thanks for the offer of maestros...we're looking to get involved in larger and smaller scale projects in Santiago over the next year-we have some great ideas, it's just getting the funding! If and when things start to happen i'll definitely be in touch.

Concrete floors? Are you planning on using solar thermal radiant flooring? i figure with Valpo having a northern exposure this would be a nice way to go but don't remember seeing solar panels on any buildings in Valpo

The concrete floors are for acoustic insulation as we could hear the cats walking on the wood floors above...it's actually a 'light cement' which is cement mixed with polystyrene pellets. It keeps the weight down. On top of the cement floors goes the original parquet flooring.

The problem with solar panels is that they have to go on the roof and it can be hard to get planning permission for them in the unesco part of town. The Harrington Hotel is being done up by a french couple and i know they're putting panels on the roof-but you can't see them. For a private residence, it's just not even close to being cost effective. The panels cost in the region of us$10,000 and reduce the electricity bills by 25%. They also have a reasonably short life-span as well. We're doing the best we can for the environment by making sure the house is seriously well insulated and re-using every single material that we possibly can.