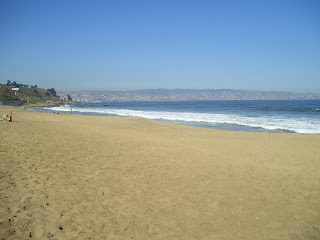 I frequently complain about the stray dog population here in Valparaiso. They leave the streets ankle deep in crap, scare tourists (although they're mostly quite tame. The dogs as well. Ha! Sorry.), spread disease and fleas and leave the streets filthy with rubbish after they've ripped apart bin bags. Liquidate them all, I say.

In Reñaca, however, you get a different class of stray. Reñaca is the middle to upper-middle class beach resort that is now part of Viña. It's not as exclusive as it once was but it's still the place to be seen during the summer holidays. It's also the place where you should be seen, for it's in Reñaca that the annual "Rear of the Year" competition is held. Reñaca attracts some of Chile's most attractive girls. It also attracts some of Chile's most unattractive boys/middle-aged/old-aged men who go to leer at the rear of the year. You certainly wouldn't catch me doing that. That's because I wear a disguise to blend in: Speedos and a black-haired wig that covers my entire torso.

Out of season, Reñaca is completely dead and my favourite place for a walk along the beach. Yesterday I headed over for breakfast at KaffeKlastch (I think it's spelled that way. I usually refer to it lovingly as 'The Kraut Haus"). Right opposite the beach, The Kraut Haus serves up great coffee and delicious cakes. After the coffee and cake I went for my walk.

There are quite a few stray dogs in Reñaca but they all look in perfect health. No skinny, mangy mutts like in Valpo. Some of the strays in Reñaca look like pedigree dogs. Some even have makeshift collars so I guess they kind of have owners (this is the Chilean sense of having a pet: give a little food and then leave outside to fend for itself).

This little fella followed me from one end of the beach to the other: 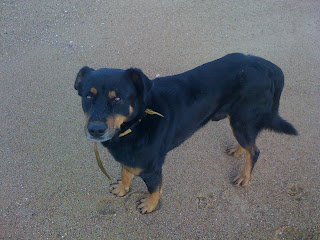 We played, I threw sticks...we had a great time. And then at the end of my walk, I bid my farewells and went home. I love dogs and I love taking dogs for a walk. I'd even love to have one if it weren't such a big responsibility. So being able to go to Reñaca and simply borrow one for an hour or so is fantastic. Hooray for Chileans' total lack of knowledge about how to take care of animals.
Posted by Matt at 09:18

except for your insane killer instincts, I agree. Chilean people doesn't know how to take care of pets, they simply think it's ok to have them around for a while and then forget about. Here in Paris you could be pursued if you don't take care of your dog, cat or whatever you have as a pet!