Even more photos of Valpo

Coming back from Santiasco yesterday we decided to take the Camino la Polvora (the Gun Powder Road-i'll investiagte why it's called that but i assume that it's because it was the old road from Valpo to Santiago and back in the day, all the gun powder used to be transported along that route).

When you reach the new prison (stunning sea views from some of the cells just to rub in the fact you're stuck inside) you have the choice of turning off or continuing along the brand spanking new motorway that snakes around the outside of the city and will eventually arrive at the port. It's a few months off completion but when it's finished it'll mean that all the lorries that currently drive through the centre of the city will be re-routed. It's a great idea. The trip is really interesting- Along with the new road, there's a beautiful new promenade and a part of the city that hasn't seen much investment in recent years is now looking good. We didn't actually take the road on this trip but next time we do i'll take some photos. It's quite impressive.

The road we did take is the one that leads down to Cerro Alegre through Cerro Miraflores. The higher up you go in Valpo, the poorer the Cerros. The road passes through a part of town most tourists will never see. It's certainly not the worst Cerro but the dirt tracks that lead off the main road and poor quality constructions show that the people living here are yet to really benefit from Chile's economic success.

One thing that the locals do have is incredible views of the city, the sea and the mountains. Yesterday was such a beautiful day that we got possibly the best view i've seen in Valpo. We could see all the way to Aconcagua and the snowy peaks of the mountains around it. Stupidly, i didn't take any photos showing Aconcagua, but you can see at least one snow capped mountain in one of the photos. 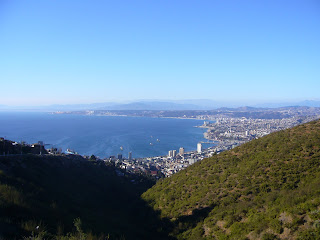 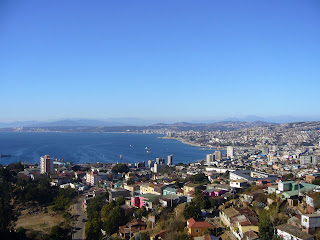 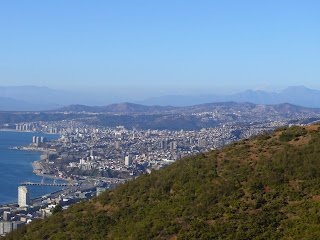 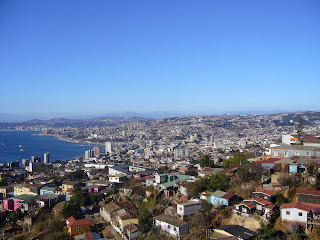