Calle Maipu down on the Plan: 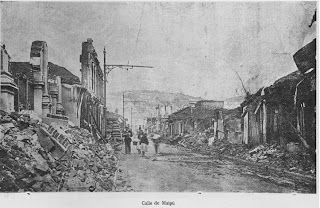 And a panoramic view of the devastation taken from probably around Cerro Bellavista, judging by the curvature of the bay. 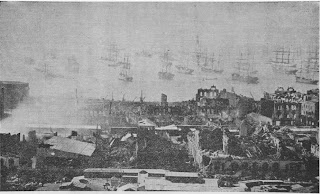 Click here to see more posts (below this one).
Posted by Matt at 22:35

Hi Matt: Sorry I'm not offering some limousine shtuff as the lads above, but ..nobody's perfect, right?
Anyhow, good that you brought up the subject of the 1906 earthquake, as this is one of the most influential events in the life of this country ever, as most of my countrymen would decisevely fail to understand. By 1906, Chile would have experienced an unprecedented growth both in population and wealth as it has never seen up to that point, due to the nitrate fields won up north during the war and the stabilising effect of the victory of congresional forces in the civil war of 1891 (much in the liking of our beloved babysitters north of Rio Grande). Waves (although small as they finally were) of immigrants from every possible corner of Europe would have filled the streets of Valparaíso and other cities and towns across the new nation, and with them, a feverish impulse to replicate the buildings' shapes, forms and methods of the old countries would have guided their hands in the settling on their adoptive land. And then, the "Big Reminder", an earthquake of such force as they had never experienced before. The effect of which touched not only the constructions, but the mindsets, aspirations and conceptions of everyone as well. Little has been said on how much this country experienced a re-birth due to such catastrophe, but I think is about time we start to do so.
Best regards y un abrazo,