It's been a while (again) since I last posted. So here's another quick summary of what I've been up to for the last few weeks.
Well, I swapped Summer for Winter in mid-December, when I headed home to England (I also call Chile 'home'). And what a Winter it was...one of the coldest on record, a whole heap of snow and the country shutting down due to the total lack of preparation from the utterly, utterly useless government.
But anyway, I started off in London, staying with my brother and family. My other, Paris-based, brother was there as well. Plus, a plague hit my family in early 2010...a plague of babies. Both my brothers and two cousins had little'uns between January and March (and also one of my best friends a couple of months ago). Not being a huge baby fan, I was expecting the worst, but they were all surprisingly well-behaved. Not that you could get a word of sense out of the parents between 6am and 9pm, when all conversation revolved around babies, vomit and poonamis but everyone seemed very content (and tired) and that's the most important thing. I'm happy my family is happy. And I'm looking forward to them all getting older and being able to interact a bit more (the babies as well, ha).
So London was nice. And cold. I met up with some great friends, had a curry down on Brick Lane and large amounts of lovely London Pride.
London snow... 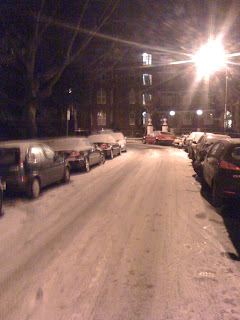 And then after two days, it was time to head up to Knowle, near Birmingham for Christmas number 1, with my Dad and his wife, Pat. We headed out on Saturday morning with severe weather warnings ringing in our ears. I had slept less than 3 hours, due to sleeping on the sofa and had woken up with a pinched nerve in my shoulder, leading to rather savage pain all down my right side. And a hangover. So when we got stuck in traffic caused by the freezing conditions and snow about 10 miles outside of London, I knew we were in for a long day...
We made it a total of 30 miles...in 6 hours before deciding to postpone the trip and pull into a hotel in a little village off the M40. Many people got stuck in their cars overnight, so we were lucky.
English travel chaos... 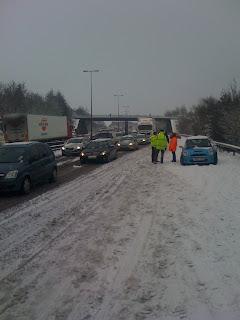 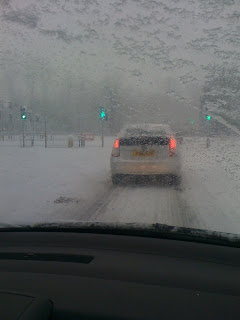 Anyway, we made it up the next day and had a nice time, despite it being cut short by a day.
A huge Chilean Araucaria in Knowle... 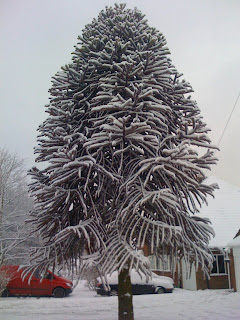 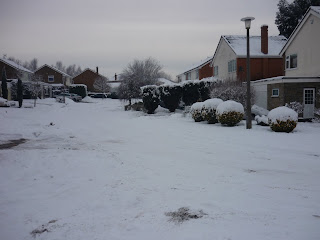 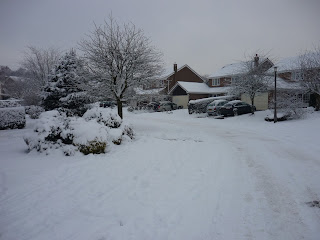 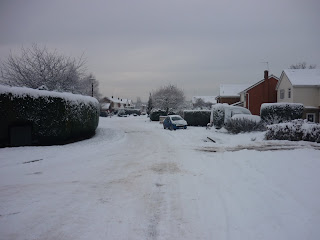 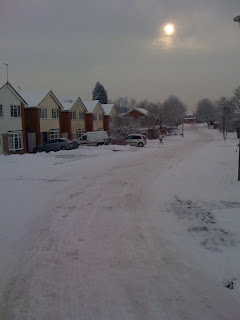 The bros. And a huge barbequed turkey (barbequed in minus 10C...) 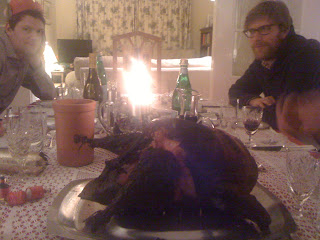 Christmas number 2 (the real one) was spent down in with my cousins in the New Forest and was as fun as ever, watching the cricket (that was a hell of a beating you took there, Australia), drinking nice wine and eating so much food. The traditional Boxing Day walk was definitely needed. 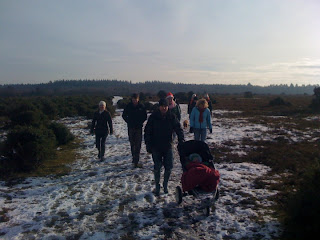 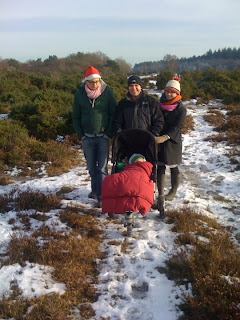 The cold weather didn't really bother me all that much. It was a lot nicer than the usual mild, damp, drizzly weather I usually experience when I go back to England. Freezing cold, snow and blue skies are so pretty. It warmed up after Christmas and it wasn't as much fun. Christmas should be cold, anyway. But a Summer new year is a lot more fun that a Winter one. But I still had a good time, hanging out with friends and playing with indoor fireworks (which I hadn't seen since I was about 6 years old). 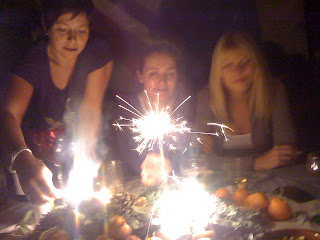 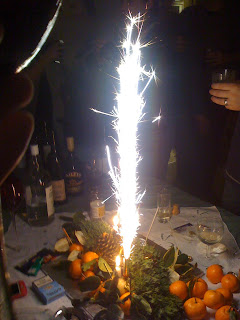 There was even the one that looks like something a baby produces several times a day... 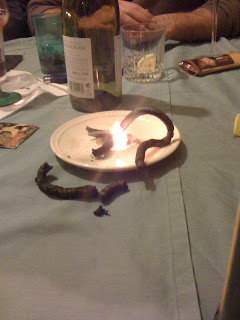 After new year, there was time for some fairly serious sales shopping in London and also for a trip to Fulham's Craven Cottage to watch my beloved West Brom get beaten 3 nil. And, as I was sitting with the Fulham fans, I had to 'celebrate' all of their goals. Oh well. 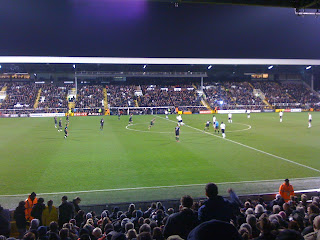 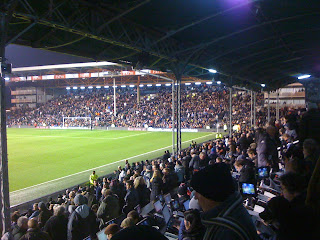 And now I'm back in Chile, walking the dogs and enjoying the Summer.
The flight was ok, despite the lack of legroom... 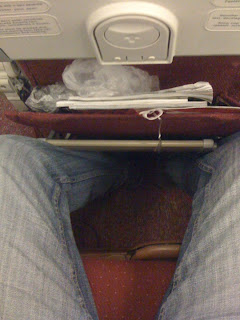 And look who were waiting for me at home, in Santa Cruz, Colchagua Valley... 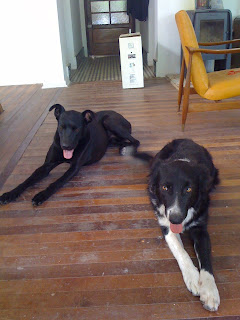 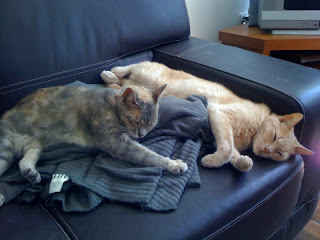 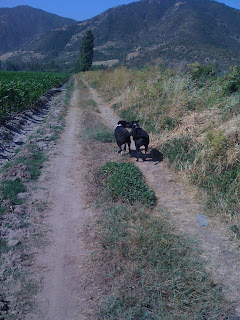 I'm also really busy. Work has picked up massively already this year (lots more people interested in real estate in Chile) and I have two, possibly three projects of my own to do. I'm feeling very optimistic about 2011. Here's hoping for a good year for everyone.
And I'll leave you with my favourite book section in WHSmith's ever: 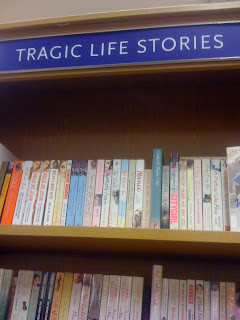 How crazy is that? I was right down the road in Tile Hill/Canley for Christmas. My partner & I were up in Scotland for all the bad weather... our trains weren't affected but we got awful tired hearing about "Frozen Britain" on the BBC :) Next year we'll probably be living in Kenilworth for 6 or 7 months while Darío finishes his Ph.D. at the Uni of Warwick. Small world, eh?

You really were just down the road. And you're going to be living in Kenilworth...my commiserations!!

And I should apologise for my useless country. A few inches of snow and the whole place shuts down. Quite pathetic but you get used to it...once you learn how to complain like an Englishman, of course. The two main topics of conversation in England are the weather and the terrible & overpriced public transport. When you can talk about the two together, it's a monster whinge-fest. I enjoy it.

Believe me, Kenilworth is the best option in that neck of the woods. Leamington Spa is nice, but too far from the uni for Darío. We may even end up in Canley... but Kenilworth isn't so bad.

Public transportation is horrendously expensive. 1 pound 60 for a single bus ticket?! We mainly walked to campus, to Coventry, anywhere we could. At least Coventry has an IKEA :)

Yeah, Leamington's ok. Although I haven't been since I was about 10. I moved away from the Midlands when I was 14, down to lovely Dorset.

Public transport's a national shame. A friend pays £5000 for a rail travel season ticket for his 45 minute commute into London...and rarely gets a seat. I'm lucky enough to have a very convenient and pretty cheap bus service from where I am in Dorset to London, but most aren't so lucky.

Anyway, enjoy your time over there! And if you can make it to the South-West (Dorset, Devon and Cornwall) you'll be in for a treat. Also, Malvern (and its hills) is one of the most beautiful areas in all England, and only 30-45 minutes away from Warwick.

Sorry, you know I have to always be on the opposite side as you when it comes to futbol.

Yeah...he was playing and he was absolutely rubbish. Most Fulham fans wanted him off at half time. He did score though- not that difficult against our horrendous, makeshift defence (we had 7 defenders out injured!). Still, we're back on track with a 3-2 win v Blackpool today. :)

Hello Matt, this is Don Alan, we were on Dave ESL quite a lot just before I headed out to live in Chile in Feb 2005. I got married in 2006 there, worked in an institute the first year, schools years 2 and 3 and then in year 4 ascended to the university. Also studied Licenciatura en Educacion at nights and graduated successfuly with distinction. Now been back in Glasgow two years in the university teaching EFl. Back to Chile for family visit in April. Have a one year old son and another on the way in June. Be an eventful time! Best wishes, Alan