Well, Valparaiso wasn't too badly affected, certainly not compared to other parts of the country. That's not to say it didn't suffer, because it did. Just that the quake wasn't as strong and the city got back to normal with water and electricity a lot quicker than further south. 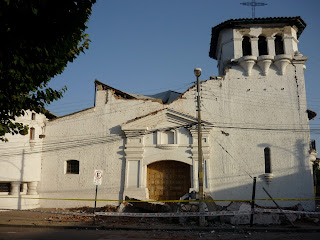 I'm sure that everyone knows what happened by now so I won't go into a huge amount of minute detail. The earthquake has hit Santa Cruz really very hard. My guesstimate is that 80-90% of the adobe structures- houses, churches, government buildings, shops- in the area have either collapsed or will need to be condemned. So much of what makes the Colchagua Valley beautiful has been lost, along with so much history. It's so sad to see.
Not only have many people lost their lives but the earthquake will have a huge impact on everyone who has survived. The worst hit are the poor, as usual. Many now have no home and no prospect of work this year: the vineyards and fruit orchards have lost stock and much of the coming fruit harvest is now lying on the ground, rotting (the grapes survived pretty much unscathed, though).
But through all of this, the people of Santa Cruz have shown the most extraordinary attitude. We've seen none of the looting or trouble that has scarred other affected areas. Things have been orderly and calm. The clean up started immediately and by Sunday morning the streets were clean and passable and the petrol stations were rotating a generator between them, ensuring that fuel supplies remained in place. It has been fantastic to see this town and the community pull together.
When the quake hit at 3.34, I didn't quite know what to do. I tried to stand up but was thrown back into bed. So I just sat there, assuming it would end soon and assuming it couldn't get any stronger. But it didn't and it did. By the half way point, I was wondering how my house was still standing. And it still kept on coming. The only way I can describe it is that it was like being in a small boat in a big storm. It's quite unnerving when something as constant as solid ground becomes liquid.
To be quite honest, I really didn't feel scared. This is not me trying to be cool; it's just that I've never experienced a big earthquake before, just some strong-ish tremors, so I had nothing to reference it against. Afterwards, I knew it had been really powerful but it wasn't until the morning when I went out and spoke to my neighbours and saw the devastation wreaked that I started to comprehend what had happened. I asked one neighbour if it was worse than '85. He called out to his friend across the street and about 12 people shouted in unison, 'Si, po!'.
I cannot believe how lucky I have been. My house suffered barely a scratch. I didn't even lose a glass. The worst that happened was a shelf of tools fell on my car and left a dent in the wheel arch. So unimportant.
On Tuesday I went to Valpo to visit my house- all fine as well. The road there was a mess but was passable in most places, apart from a detour through Melipilla. Lago Rapel was badly hit, the road torn apart but by the time we came back on Wednesday afternoon, it was already well on its way to being fixed.
The response to the damage caused has been incredible in this part of the country. Things are getting back to as normal as they can be. It's really very impressive to see and it makes me proud to live here.
What the region- and the country- needs is for people to keep coming here as tourists or as investors. It's really important that people aren't put off visiting the country. Don't feel shy to come and tour the Colchagua Valley. You may think that it's not the right time, you may feel guilty but this is when we most need you to come.
Please come and stay in the hotels here, spend money and buy wine. Come and buy property- this is still a fantastic place in which to invest. This is not a marketing plan of mine, I'm not trying to take advantage of a terrible situation. I love the Colchagua Valley and I'm desperate to help the area rebuild itself. This is my home now and we need your help. Trade and investment will be the key to regenerating the region. If you are looking for a vineyard, fruit orchard or land for sale in Chile, please contact me via the link in the top right hand corner of this page.
Photos below:
In my house, all the wardrobes fell over. Sasha, my puppy, was trapped underneath. Thankfully, he's being crate trained and his cage, made by a guy here in Santa Cruz, survived the weight and the puppy got out ok. 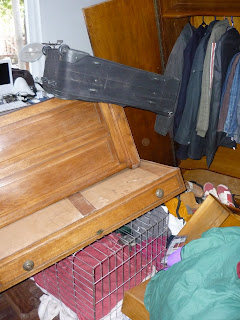 The church on the Plaza de Armas was badly damaged and will need to be pulled down, I think. 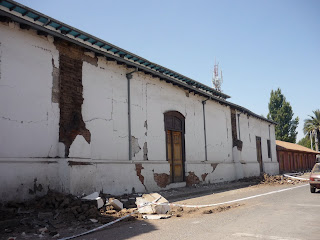 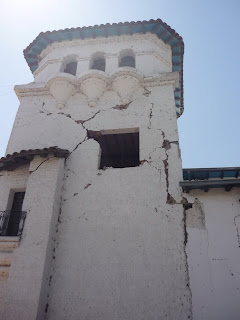 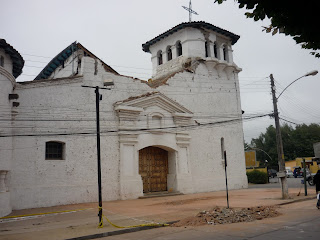 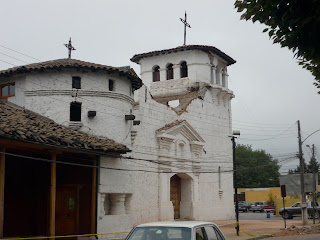 The road leading onto the Plaza de Armas was seriously damaged. I imagine that the entire street will be demolished. A friend lived in one of these houses but thankfully came out alive. Her car- not so much.
This was the scene at 8.30, 5 hours after the earthquake struck. 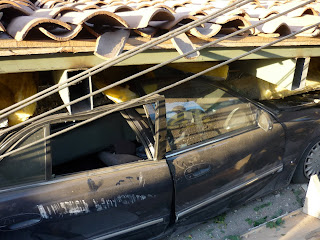 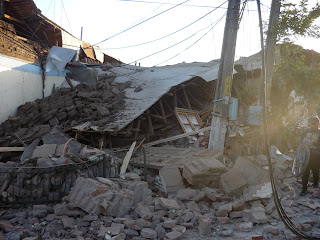 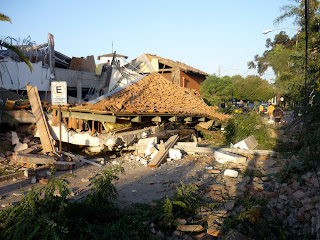 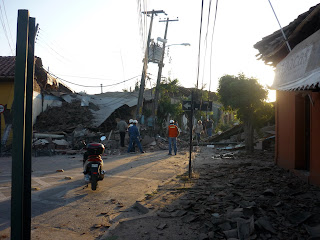 By late afternoon on Saturday, the road had been pretty well cleared and by Sunday it was open to traffic. Very impressive. 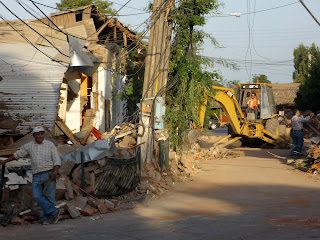 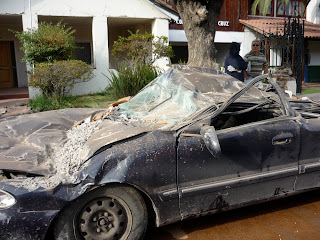 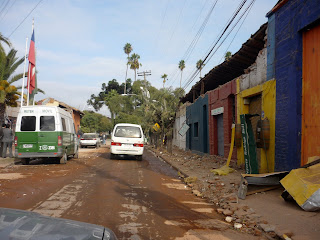 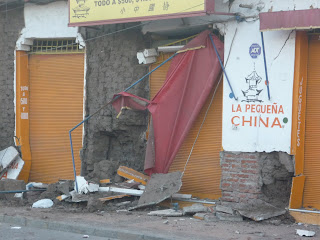 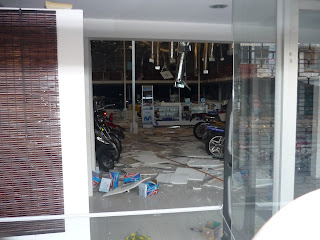 The Imprenta Koqui didn't make it. 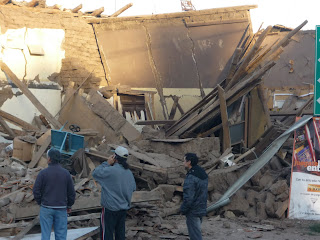 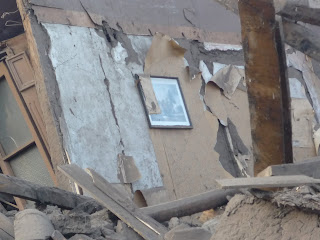 This house actually looked almost identical before the earthquake. 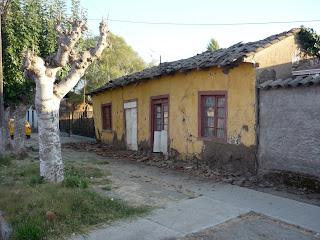 Bomberos- the aid distribution and registration centre. They've been doing a great job. 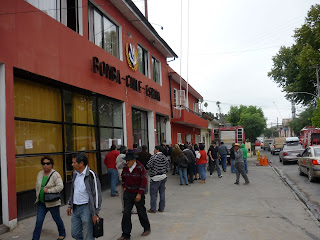 The Apalta Valley was badly affected as well... 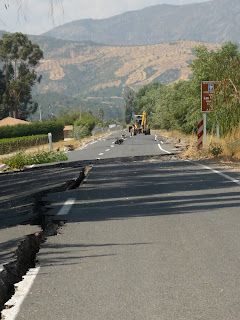 ...and wineries lost millions of litres of wine, causing the irrigation ditches to look this colour. 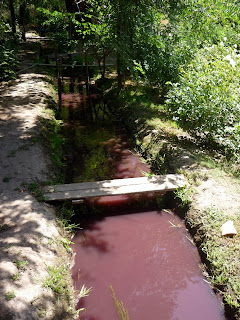 The road through Lago Rapel on Tuesday. By Wednesday afternoon, work crews had filled in most of the cracks and were busy preparing the tarmac. 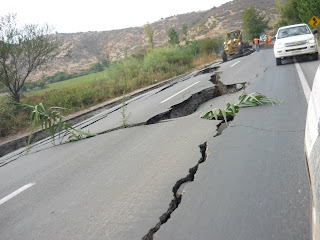 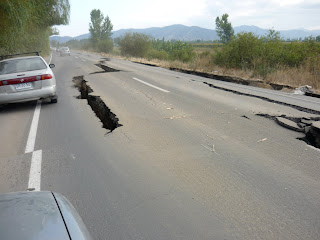 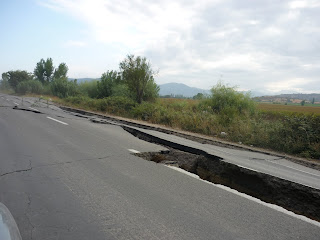 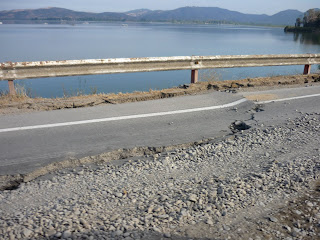 I'll post more photos over the next day or two.
Posted by Matt at 10:29

Matt, thank you for your account and photos of what happened in Santa Cruz. We visited this lovely town in May, 2008 on a tour. My husband & I loved this place. We also visited Vina Santa Cruz, but I've been unable to contact that winery. I'm not surprised that these people have been so strong and resilient. I wish you all the best... Sharon Koch

Thanks for your comment, Sharon. Hope Santa Cruz and Chile sees you back down this way at some point. We need tourists to come back soon!