How To Destroy Something Beautiful, Chilean Style: Caleta Quintay 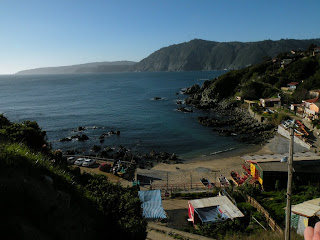 A few weeks ago, I went with a friend to Quintay as he was interested in purchasing one of the restaurants down by the caleta (fishermans' wharf/dock).
Caleta Quintay is beautiful. The drive from the Ruta 68 is beautiful, winding through forests before a series of sharp curves take you down into the town of Quintay. A single lane track leads down to a little cove with a beach and several decent seafood restaurants. On the walk down the lane, it's like a small little fishing village in Cornwall, only with better weather. It's really very pretty.
A couple of hundred metres along from the Caleta is the ex-whaling station. Whaling stopped in the 1960s and last year a mother and her calf were spotted for the first time since then. Whales are returning to Quintay after almost 50 years.
The whaling station is now open to the public as a museum. Granted, it's a pretty poor museum; the exhibits look like a 12 year old's school project but the potential to do something great is clearly there.
Unfortunately, the Ministerio de Obras Publicas and the local fisherman have other ideas. They plan to cement 30 metres out into the Ocean, covering the rocks, destroying the local eco-system, disrupting the nesting habits of Quintay's pelican population and completely destroying everything that is lovely about Caleta Quintay.
The supposed plan is for a new dock for the fisherman. It's pretty obvious to everyone that the dock will simply be used for parking. There is no need whatsoever for a new dock. The ex-whaling station that is already there would be ideal for the fishermen.
The budget for the project is about us$36 million. Seriously. Can you imagine what they could do with the Caleta and the whaling station with us$36 million if they wanted to design something good, something devoted to tourism, to whale-watching. The fishermen are clearly crazy- more tourists mean more restaurants which would mean more business for them.
This project will do nothing but drive tourists away from the Caleta. A huge opportunity to undertake a truly worthwhile project is about to missed.
Why not use the money to convert the whaling station into a wharf and a proper museum (as has happened very successfully in countless former whaling towns worldwide)? The beach area and coastal path could be renovated and cleaned up. Instead of allowing people to park at the beach (which creates serious traffic issues along the single track road leading down), why not have a bus system that runs from the top to the bottom (with parking only allowed from where the bus leaves)?
It is so frustrating to see Chile make the same stupid mistakes we made in Europe in the 60s and 70s that lead to so much destruction . Why can't this country learn from those mistakes?
I simply cannot understand how anyone could think this project is a good idea.
So you can see the scale of the destruction about to be wreaked on Caleta Quintay, the plans are below. If you are interested in knowing more, contact Mario F. Illanes, head of Comité, Salvemos la Caleta de Quintay via email: rightdir(at)vtr.net
The group needs urgent legal assistance, time is running out to either stop of modify the project. If you can help, please do. 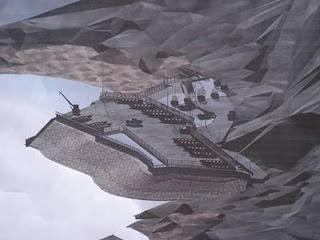 Thanks for writing about this as we have fallen in love with quintay and ourselves have a beach apartment. please not that the minister of public works (MOP) has a home in Quintay. Supposedly the fishermen will adminster this at some point in the future, but they are not fishing much, not much to fish and I do not know how they will afford this potential white elephant. Also, note...no environmental impact study was ever done.

It's pretty obvious that tourism, specifically whale-watching, is best bet for Quintay in the years to come. The potential to turn the whaling station into a working tourist attraction is there, but as so often in Chile, the vision is lacking.

They really need to look at the longer term picture.

Ok, I have to admit that I laughed REALLY HARD when I read the title of your post and sort of imagined something (much less drastic) along the lines of what you wrote about.

But then when I read/saw the graphics of what they're going to do I literally felt a pit in my stomach. I have only been to Quintay once but I thought it was gorgeous. To see it go down the tubes like that would be a shame. I'll have to make sure I get in a photo session there before they start construction.

This is Valentina. I am a 19-year-old chilean (Santiaguina, but born in Reñaca) studying in London, and I just discovered your blog.
I've been reading it for the last 15 minutes, and I must say that the way you express those things you observe impresses me. I think you have consistent ideas that need to be shared a bit more.. especially this particular entry about Caleta Quintay. If those architects and fishermen could only hear these ideas, these feelings, and impotence... maybe, something could be changed. I don't have much hope, but I do think that your ideas are absolutely relevant, and that must be shown to them...

George, USA. I was there in mid January 2010. It was the most memorable stop of my 17 days in Chile. I would be saddened to see it change.

Almost every member of our extended Chile - US family has visited this town. Naps by the colorful boats after a large lunch. How sad to ruin what makes this place so special. Has anyone heard or seen what has happened at Quintay since the earthquake?

Hi maroiouuu this is your friend huevapilas from Chuqui and grants ..estoy en cocon por unos dias y pense que te pondria visitor en quintay Pero on me résulta tu direccion rightdir en El email .. Give me another hint where I can reach you. Cj vuelvo a stgo el viernes.. 3/15/12