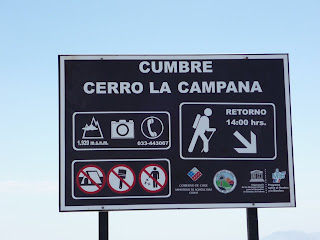 Yesterday I went back to Cerro La Campana (click here for previous posts and scroll down the page).

This was the fourth time I've been to La Campana. You may be wondering why I've been so many times. Mainly it's because there aren't any other decent hikes within 45 minutes of Valpo but it's also because it's a really fun challenge; hard work but non-technical and the incredible views from the top are really worth the effort.

Yesterday, however, I wished I'd not gone. I went with a friend who decided after half an hour that he wasn't going to be able to make it up. He gave me his camera and urged me to go on alone. We arranged to meet at the mine area half way up after I'd been up to the cumbre.

The reason it was so tough early on was the warmth. The last three times I've been, the first hour was hiked in cool, even cold conditions under the cover of the trees. This time, it was over 20C at 8.30 in the morning and the extra effort required so early on in the hike proved exhausting. By the time I had reached the mine area on my own, I felt more tired than I had after reaching the top on previous occassions.

The part from the mine area up was really difficult for two reasons. One, the temperature had hit about 30C and two, due to the complete lack of rainfall at this time of the year, the trail was really dusty and very slippery. It was so tiring I was pausing momentarily every 20 metres or so to catch my breath.

By the time I reached the summit, I was ready to collapse. I ate my lunch, took a few snaps and was eaten alive by flies and midges. I lasted about 25 minutes before I was driven down again. I'd taken over 3.5 litres of water and half a litre of chocolate milk but it was so hot, all I had left was under 500ml for the descent.

I was happy to reach the car and get home.

So it was a reasonably miserable climb and had I known it would be so in advance I doubt I'd have gone. However, I'm glad I did push on. The views at the top were not the best but still worth the trouble and I feel pretty good about overcoming my desire to just give up and go home.

If you're thinking about climbing La Campana at this time of year I'd definitely say it's worthwhile if you can't do it at any other time. Otherwise I'd suggest waiting 'til April and May or Septmeber and October. 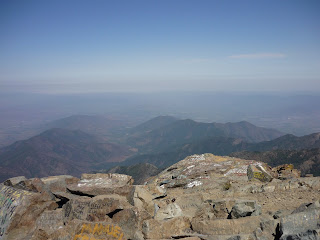 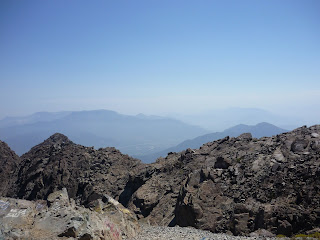 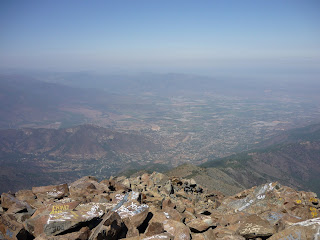 That white tinge to the photo is Valpo under a cloud. 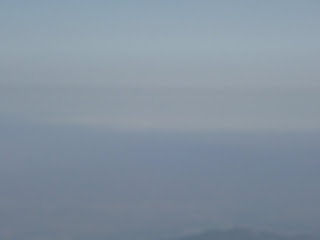 The pictures are beautiful. I haven't been yet.