El Mercurio de Valparaiso lays claim to being the oldest Spanish language newspaper in circulation today. But it wasn't always the only decent newspaper in the city. La Union was founded in 1885 by a group of powerful conservative businessmen-all of their surnames are now street names: Edwards, Lyon, Eyzaguirre, Donoso, Juan de Dios. The 'paper was a staunch defender of democracy and civil liberties (although most likely only those that benefited the stinking rich).

In 1912, the 'paper was acquired by a relation of one of the original founders, the Archbishop Gonzalez Eyzaguirre who hired a young go-getting reporter, Rafael Luis Gumucio, who was successful in creating numerous citizen campaigns to improve the city. Thanks mainly to this one reporter, the 'paper's circulation increased from 16,000 to 35,000 pretty much overnight.

It was during this time that the 'paper got a spanking new printing press to go along with its fantastically bizarre building opposite the Cathedral in Plaza Victoria . Well, the base of the building isn't so weird. But just look at that absurdly cool tower...it's taller than the actual building... 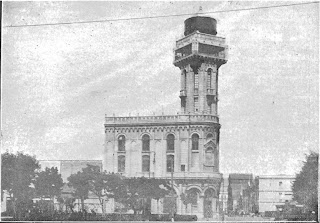 Sadly, the tower is gone, almost certainly the victim of the 1985 earthquake or maybe even before. It's impossible to get the same photo angle these days as the trees are now too tall. 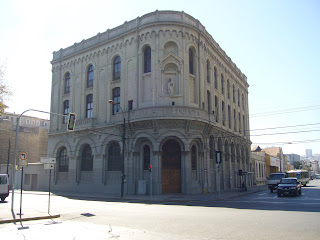 The newspaper itself was where Valparaiso's most famous cartoonists got his break. Known to everyone as Lukas, Italian immigrant Renzo Pecchenino Raggi started at the 'paper in 1958 (Lukas will get a full post at some point soon although he probably deserves more than that).

Unfortunately, I'm having real problems finding out just when La Union closed for good. Anyone care to help?
EDIT: I'm starting to think that the tower on the building is an optical illusion...could it be an independent water tower situated directly behind the Union building?
Posted by Matt at 10:17

Hey, do you by any chance know if there exists an archive of "La Union"'s articles somewhere? thanks!